Early-season MVP talk hasn’t been a distraction, Celtics star Jayson Tatum told reporters, including Dana Scott of The Arizona Republic, in a media session before tonight’s game in Phoenix. Boston has the best record in the league at 20-5 and Tatum ranks fourth in scoring at 30.8 PPG, so he’s a natural candidate for the award but he’s not focused on it.

“It’s something that I’m aware of, but I think a lot of it has to do with our team’s success,” Tatum said. “I think I keep playing the way I am and everybody individually, and we keep complementing each other the way we are, and continue to win, then everybody’s going to get individually what they deserve. So I guess the main focus is to keep trying to be one of the best teams and keep trying to win and just get closer to our ultimate goal of getting back to the finals.”

There’s more on the Celtics:

Jaylen Brown and Kyrie Irving were often at odds when they were teammates with the Celtics, but their relationship has improved since Irving left for the Nets, writes Gary Washburn of The Boston Globe. Brown was among Irving’s most vocal defenders during his eight-game suspension last month for promoting an antisemitic film on social media.

“He’s a brother of mine,” Irving said. “I’m grateful to have a relationship off the court. True warriors when we go against each other. When I was in Boston, we didn’t really get a chance to get to know each other on a deeper level. So again, I’m just grateful that we’ve been able to build on top of a great foundation of relying on how we live our lives and how we treat people, so he’s a brother of mine.”

Brown stopped short of calling their relationship brotherly, Washburn adds, noting that they didn’t talk with each other before their teams met Sunday. Brown admitted they had problems when they were together, but said things are better now.

Blake Griffin had to shake off some rust in his debut with the Celtics Friday night, but he showed several ways that he can help the team, writes Brian Robb of MassLive. After some early turnovers and missed shots, Griffin sparked a comeback that erased a 15-point deficit in a win over the Hornets. He finished with seven points and nine rebounds in 16 minutes and displayed an unselfishness that could make him an important part of Boston’s offense.

Griffin, 33, saw his role with the Nets diminish as last season wore on, and he spent nearly the entire offseason as a free agent before signing with the Celtics on Monday. He appeared to take a subtle swipe at his former team after the game while talking about coming to Boston, Robb adds.

“I think the intensity and maturity level of this group is off the charts,” Griffin said. “Every day when we get to work it’s intense. It’s not that we’re going forever but these guys are locked in and no one has to tell us to be locked in. It’s refreshing.”

Blake Griffin, who officially signed with the Celtics on Monday, was pleasantly surprised by how the team greeted him upon his arrival, Darren Hartwell of Yahoo Sports relays.

“I’ve talked to pretty much everybody,” Griffin said. “I was talking to some guys (Sunday). … I’m actually very — not surprised, but the amount of maturity and welcomingness (that the Celtics’ players showed) … it’s a different atmosphere than I was sort of used to, in a good way. They were very welcoming: everybody, one through 15. Practice today was focused, very encouraging, helpful. I think you kind of take that for granted because it’s not always the case everywhere you go.”

OCTOBER 3: The signing is official, the Celtics announced in a press release.

SEPTEMBER 30: The Celtics have agreed to a deal with free agent big man Blake Griffin, reports Adrian Wojnarowski of ESPN (Twitter link). According to Wojnarowski, Griffin will sign a fully guaranteed one-year contract with Boston. 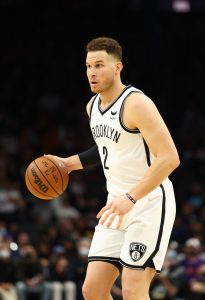 Still, the Celtics won’t be expecting Griffin to recapture his All-Star form. Boston simply needs more reliable depth in a frontcourt that has already been hit hard by injuries. Danilo Gallinari is expected to miss most or all of the 2022/23 season while recovering from a torn ACL, while Robert Williams will be out until at least November or December following knee surgery.

Multiple reports leading up to training camp indicated that the Celtics wanted to take a look at their in-house options before deciding whether to sign a veteran free agent. Several days into camp, it seems the team had seen enough to recognize that another veteran was necessary.

The Cetlics had no shortage of options in free agency — LaMarcus Aldridge, Carmelo Anthony, Hassan Whiteside, DeMarcus Cousins, Tristan Thompson, and Dwight Howard are among the unsigned veterans still on the market. But the team attended Griffin’s recent workouts in Los Angeles and liked what it saw there, per Himmelsbach.

Boston has a full 20-man training camp roster, so the club will need to waive a player in order to make room for Griffin. I’d expect one of the six players on a non-guaranteed contract – Noah Vonleh, Jake Layman, Justin Jackson, Brodric Thomas, Luka Samanic, or Denzel Valentine – to be cut to open up a spot.

Cam Thomas‘ playing time dropped late last season and it doesn’t figure to spike upward with all of the Nets’ stars back in action this season, Brian Lewis of the New York Post notes.

“We’ll see how it goes after training camp. But he clearly is on a veteran team with a lot of guys who can play, have had a lot of success,” coach Steve Nash said. “We know Cam’s talented, and just trying to continue to develop him and see if he can keep pushing and getting better at certain things that’ll help him get minutes. I said whether he plays or he doesn’t play, he has to stay positive, he has to keep the belief that this process is going to help him.”

When word broke on Friday that the Celtics have agreed to sign Blake Griffin, we noted that injuries to Danilo Gallinari and Robert Williams helped necessitate the move. However, those aren’t the only Boston frontcourt players dealing with health problems.

According to Jared Weiss and Shams Charania of The Athletic (Twitter link), Celtics big man Luke Kornet sprained his ankle in practice this week and is expected to miss at least one or two weeks.

Kornet doesn’t have a fully guaranteed salary, but finished last season with the Celtics and has a partial guarantee on his new contract with the team, so he looks like a good bet to make the 15-man regular season roster, despite this setback.

The Knicks still have two projected openings on their 15-man regular season roster, and several former All-Stars who have experience playing in New York are still available on the free agent market. Former Nets big men Blake Griffin and LaMarcus Aldridge and ex-Knicks star Carmelo Anthony are among the notable names who remain unsigned.

However, according to Marc Berman of The New York Post, the Knicks don’t currently view Griffin, Aldridge, or Anthony as a great fit for their roster. If the team makes a trade or two, it’s possible that stance could change, but for now it seems unlikely that any of those veterans will sign with New York, Berman writes.

The Celtics aren’t expected to sign free agent Carmelo Anthony as a replacement for the injured Danilo Gallinari, Brian Robb of MassLive writes in a mailbag column. The possibility of Anthony heading to Boston has been rumored over the past week, but multiple league sources tell Robb that Anthony isn’t considered a priority for the team.

The Celtics’ roster isn’t fully set heading into training camp, and a free agent or two could eventually be added. However, Robb hears that Boston wants to give players who are already under contract the first chance to replace Gallinari, including Sam Hauser and some big men who are hoping to make the team.

He suggests that Anthony may become an option later in the season if he’s still available and the Celtics need to add scoring off their bench. Robb also dismisses the prospect of veterans such as Blake Griffin or LaMarcus Aldridge being brought into camp.

Anthony remains unsigned roughly two weeks before camps open, even though he was fairly productive for the Lakers last season. The 38-year-old forward averaged 13.3 points and 4.2 rebounds in 69 games while shooting 44.1% from the field and 37.5% from three-point range.

In order to maximize their chances of winning a championship, the Sixers need to reinvent themselves around an injured Joel Embiid, David Murphy of the Philadelphia Inquirer opines. Embiid is dealing with ligament damage to his thumb and will undergo surgery after the playoffs.

As we relayed, he has no intention of sitting out, but he clearly seemed bothered by the injury in Game 4. The MVP candidate still finished with 21 points and eight rebounds, but he was frequently grabbing at his hand during stoppages of play.

The Sixers have enough talent around Embiid to close out their series against the Raptors, but advancing beyond the second round without his usual level of production would be difficult. Embiid is coming off a season in which he averaged a career-high 30.6 points, 11.7 rebounds and 1.5 blocks on 50% shooting.