Bucks’ Bobby Portis To Miss Time Due To MCL Sprain

1:06pm: The expectation is that Portis will be out for at least two weeks before being reevaluated, according to Wojnarowski (Twitter link).

11:28am: The Bucks will be without one of their key frontcourt players for the foreseeable future, according to reports from Shams Charania of The Athletic and ESPN Adrian Wojnarowski, who both say that Bobby Portis has been diagnosed with an MCL sprain in his right knee.

It’s still unclear how long Portis will be unavailable. Charania’s report simply says Portis will “miss time,” while Wojnarowski hears from sources that the Bucks are working on determining a potential recovery timeline.

The recovery period for an MCL injury can vary depending on the severity of the sprain, but it typically keeps players sidelined for a matter of weeks, not days. As Wojnarowski observes, Portis missed seven weeks due to an MCL sprain during the 2018/19 season when he was a Bull. It’s also the injury that’s currently keeping Kevin Durant on the shelf — he’s expected to miss at least a month.

Portis, who suffered the injury during Monday’s win over Detroit, has enjoyed the best run of his eight-year career since joining the Bucks in 2020/21. This season, he’s averaging a double-double for the first time as a pro, registering 14.4 points and 10.1 rebounds per night through his first 47 games (26.8 MPG).

The Bucks got Giannis Antetokounmpo and Khris Middleton back from injuries earlier this week and will continue to rely on Brook Lopez as their primary center, but suddenly find themselves short on depth in the middle. Veteran big man Serge Ibaka, who would typically move up the depth chart with Portis out, is away from the team as he and the Bucks look to find him a new home via trade.

Pacers guard T.J. McConnell took a hit to his right shoulder on Sunday but an MRI showed the shoulder was “stable” and he was able to practice on Tuesday, Dustin Dopirak of the Indianapolis Star reports.

“I think it was one of those weird plays where I just got hit in a bad spot,” McConnell said. “I was a little worried at the beginning and it was really painful, but our training staff is awesome, they worked on it. They said it was stable and the MRI showed that there was nothing seriously wrong. So it’s just about playing through the pain right now knowing it’s good, it’s stable. I said that I missed enough games last year, I can play through a little bit of pain.”

McConnell is in the second season of a four-year, $33.6MM contract.

Celtics forward Jayson Tatum is the choice for Most Valuable Player one-third of the way through the 2022/23 NBA season, Nekias Duncan of BasketballNews.com argues in an early-season award ballot. Tatum is averaging over 30 points, eight rebounds, and four assists per game with terrific shooting numbers and is a candidate for an All-Defensive spot on the other end of the floor, according to Duncan, who contends that doing all that for the NBA’s best team makes the MVP award Tatum’s to lose.

Duncan also checks in on the NBA’s other award races, selecting Bucks center Brook Lopez as the top candidate for Defensive Player of the Year, Magic forward Paolo Banchero as the early Rookie of the Year frontrunner, and Bucks forward/center Bobby Portis as his Sixth Man of the Year choice, among others.

“He’s getting better. Probably not at the speed that we would like. But he’s getting better,” Karnisovas said of Ball. “Hopefully, he’s going to be ready for training camp. That’s just our hopes.”

Ball, who underwent surgery on a torn left meniscus in January, was bothered by a bone bruise when he attempted to ramp up his rehab process last season. According to Johnson, Ball has experienced “similar starts and stops” this offseason and still sometimes experiences discomfort when he increases his workload.

With the Las Vegas Summer League underway, top pick Paolo Banchero isn’t shying away from the spotlight, Tim Reynolds of The Associated Press writes. The Magic forward is eager to show the fans why Orlando considered him the draft’s top prospect.

“I love when big crowds are out, when all the cameras are out, that’s when I play my best,” he said. “So, I’m looking forward to it and it’s going to be fun.”

JULY 6: The Bucks have officially re-signed Portis, the team announced today in a press release. 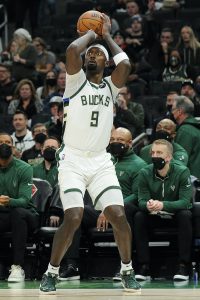 That’s the maximum amount that the Bucks could have given Portis using his Early Bird rights after he turned down his $4.6MM player option earlier this week.

The 6’10” Portis had a strong second season with Milwaukee, averaging career-highs in points (14.6) and rebounds (9.1) while appearing in 72 games (28.2 minutes per contest). He also started a career-high 59 games as center Brook Lopez dealt with a back injury which required surgery.

Portis, 27, is well-known for bringing lots of energy and intensity to the court, but he’s also a skilled offensive player, posting a .479/.393/.752 shooting line. He primarily served as a shooter for the Bucks to create space and driving lanes for two-time MVP Giannis Antetokounmpo, who has said he loves playing with Portis.

While Portis is a limited defender, he’s a good rebounder and gives solid effort, he just makes poor decisions and has trouble staying in front of smaller players. He also isn’t much of a rim protector, but Antetokounmpo is a very good backline anchor, which covers up for Portis’ weaknesses somewhat.

Portis was a key reserve when the Bucks won the title in 2020/21 and is a fan favorite in Milwaukee. Given he’s the same age as Antetokounmpo and Lopez is 34 and will be on an expiring deal, clearly the Bucks viewed Portis as a priority to retain, and since they’re over the cap, it’s not like they could easily find someone to replace his production.

Bobby Portis has told the Bucks he will decline his $4.6MM option for next season, tweets ESPN’s Adrian Wojnarowski.

The 27-year-old forward will be an unrestricted free agent, but there’s a good chance he’ll stay in Milwaukee on a more lucrative deal, according to Jake Fischer of Bleacher Report, who says Portis “seems destined” to sign a new contract worth more than $40MM over four years to remain with the Bucks.

The Bucks have Early Bird rights on Portis and can pay him up to $49MM over four seasons, according to Bobby Marks of ESPN (Twitter link). Marks adds that a new Early Bird contract must cover at least two seasons with no options in the second year.

Portis played an important role in Milwaukee’s title-winning team in 2020/21 and was just as valuable this past season. He moved into the starting lineup — starting 59 of the 72 games he played — and averaged a career-best 14.6 points and 9.1 rebounds per night.