Nets coach Steve Nash said Kyrie Irving “looks great, considering” and is “getting close” to making his season debut, according to Peter Botte of The New York Post. Irving, who can only play in road games because he hasn’t complied with New York City’s vaccination requirement, could return Wednesday at Indiana, although Nash hasn’t committed to that date.

“He was in isolation for however many days, 10-plus days, I think. For him to come out of that and look as good as he has playing with the stay ready group and getting his rhythm back has been exciting,” Nash said. “We have to give him time to really get his feet under him, but as far as how he looks, he looks very gifted.”

Irving rejoined the team for practice last week after clearing health and safety protocols. If he doesn’t play Wednesday, the next opportunity will be January 12 at Chicago.

“I think he’s on his way. It’s getting close,” Nash added. “We’ve just got to make sure we don’t make a hasty decision, but it’s coming.”

DECEMBER 24: The Raptors have reached an agreement to sign center Daniel Oturu to a 10-day contract, sources tell Adrian Wojnarowski of ESPN (Twitter link). Toronto will complete the signing using a hardship exception.

Oturu, the 33rd overall pick in the 2020 draft, spent his rookie season in ’20/21 with the Clippers, averaging 1.8 PPG and 1.6 RPG in 30 games (5.4 MPG). He was sent to the Grizzlies along with Patrick Beverley and Rajon Rondo in an August trade, then joined the Bulls for training camp after being waived by Memphis.

Although Oturu didn’t make a real impact at the NBA level in his first season, he’s still just 22 years old and is only two years removed from a standout sophomore season for the Minnesota Gophers. He averaged 20.1 PPG, 11.3 RPG, and 2.5 BPG in his final year at college, earning Big Ten All-Defensive honors. He also got off to a strong start in the G League for the Windy City Bulls this season, putting up 20.6 PPG, 9.3 RPG, and 1.9 BPG in seven games (32.1 MPG).

The Raptors, who have eight players in the health and safety protocols, have had a busy week on the transaction wire. They signed three players – Juwan Morgan, D.J. Wilson, and Tremont Waters – to 10-day contracts on Wednesday and have reportedly reached deals with Nik Stauskas and Brandon Goodwin as well.

Assuming Stauskas and/or Goodwin didn’t test positive for COVID-19, the Raptors will likely sign them and Oturu before their next game on Sunday in Cleveland.

The Bulls have waived center Daniel Oturu and shooting guard Ethan Thompson, the team announced today (via Twitter). Both players had been in Chicago on Exhibit 10 contracts.

Oturu, the 33rd overall pick in the 2020 draft, spent his first NBA season with the Clippers, averaging 1.8 PPG and 1.6 RPG in 30 games (5.4 MPG). He was sent to the Grizzlies along with Patrick Beverley and Rajon Rondo in an August trade, then joined the Bulls after being waived by Memphis.

Thompson, who went undrafted this year, spent his four-year college career with Oregon State, starting all 127 games he played for the team. In 2020/21, he averaged 15.7 PPG to go along with 4.0 RPG and 3.9 APG in 33.6 minutes per contest (33 games). The 22-year-old earned a spot on the All-Pac-12 First Team, then played for the Bulls’ Summer League team in Las Vegas.

With Oturu and Thompson no longer in the mix, the Bulls are carrying 18 players, including one (Devon Dotson) on a two-way deal. The team has 13 players on guaranteed contracts, with Stanley Johnson, Alize Johnson, Tyler Cook, and Matt Thomas vying for the last two spots on the 15-man regular season roster.

It’s the third team of the offseason for Oturu, who was selected 33rd overall in the 2020 draft and spent his first NBA season with the Clippers, averaging 1.8 PPG and 1.6 RPG in 30 games (5.4 MPG). He was sent to the Grizzlies along with Patrick Beverley and Rajon Rondo in an August trade, then was waived by Memphis last week.

Although Oturu didn’t make a real impact at the NBA level in his rookie season, he’s still just 22 years old and is only two years removed from a standout sophomore season for the Minnesota Gophers. He put up 20.1 PPG, 11.3 RPG, and 2.5 BPG in his final year at college, earning Big Ten All-Defensive honors.

Of course, even if the Bulls see some potential in Oturu, that doesn’t necessarily assure him of a regular season roster spot. The team only has 13 players on fully guaranteed contracts, but competition for the last spot or two on the 15-man roster will be fierce, with NBA veterans Stanley Johnson, Alize Johnson, Tyler Cook, and Matt Thomas also in the mix.

The Bulls now have a full 20-man preseason roster.

The Grizzlies have waived guard Carsen Edwards and big man Daniel Oturu while adding Shaq Buchanan and Sean McDermott to their camp roster, the team tweets.

Edwards was acquired from the Celtics earlier this month. Oturu was among the players acquired from the Clippers in the deal that sent Eric Bledsoe to Los Angeles. Edwards had a salary of $1.78MM, while Oturu’s salary for the upcoming season was $1.52MM.

Memphis had other motives for making those deals and obviously wasn’t interested in retaining either player.

By waiving the duo, Memphis is now down to 16 guaranteed contracts, one over the limit for the regular season, Bobby Marks of ESPN tweets.

Buchanan has played for Memphis’ G League team. He was in Grizzlies camp last season but was waived prior to opening night.

AUGUST 16: The Grizzlies and Clippers have put out press releases officially announcing the trade. 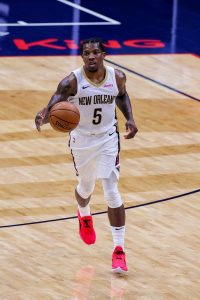 AUGUST 15: The Grizzlies and Clippers have agree to a trade that will send veteran point guard Eric Bledsoe back to Los Angeles in exchange for Patrick Beverley, Rajon Rondo, and Daniel Oturu, reports ESPN’s Adrian Wojnarowski (Twitter link).

Bledsoe, who began his NBA career with the Clippers back in 2010, was traded from New Orleans to Memphis earlier in the offseason as part of a salary-dump deal that also sent Steven Adams to the Grizzlies. A report at the time of the agreement indicated that Bledsoe was unlikely to remain in Memphis, though it was unclear if the plan was to trade him or buy him out.

This trade, a three-for-one swap, will help generate some roster flexibility for a Clippers team that had been carrying 16 players on fully guaranteed contracts. Los Angeles will now have 14 players on guaranteed deals, plus Yogi Ferrell on a non-guaranteed salary.

The three outgoing players are all on expiring contracts, while Bledsoe is on a pseudo-expiring deal — his $19.38MM salary for 2022/23 is only partially guaranteed for $3.9MM. Because only Beverley and Oturu are required for salary-matching purposes, L.A. will generate a trade exception worth Rondo’s $8.25MM salary, Marks notes.

Although the Clippers will sacrifice a little depth in the trade, Bledsoe is a bounce-back candidate who could conceivably provide the club with some of the play-making and defense lost by moving Beverley and Rondo. Bledsoe had a down year with the Pelicans in 2020/21, but he averaged 5.5 assists per game during his time in Milwaukee from 2018-20 and earned All-Defensive nods in both seasons.

The Grizzlies, meanwhile, save a little 2022/23 money in the deal while taking on some extra salary for ’21/22. Memphis is now facing a roster crunch of its own, with 17 players on fully guaranteed contracts.

According to Wojnarowsi (Twitter link), the Grizzlies will be “open-minded” in weighing additional roster moves involving Beverley, Rondo, and/or Oturu and will likely consider flipping one or more of them in separate deals.

Memphis is already relatively deep at the point guard spot, with Tyus Jones backing up Ja Morant and De’Anthony Melton also capable of playing the position. As such, it’s hard to imagine both Beverley and Rondo starting the season with the club.

Because they’re on smaller expiring deals, Beverley and Rondo should be easier for the Grizzlies to move in subsequent trades than Bledsoe was. The move to turn one bigger contract into multiple smaller ones is somewhat reminiscent of a trade the team completed during the 2019 offseason, sending out Chandler Parsons‘ oversized expiring deal for Solomon Hill and Miles Plumlee, who were each earning about half of what Parsons was.

Thunder rookie big man Aleksej Pokusevski has averaged 17.4 minutes per game in 17 appearances but he’s headed to Orlando to join the G League’s Oklahoma City Blue, according to Joe Mussatto of The Oklahoman. The 17th overall pick, who played 20 minutes in a blowout loss to Houston on Monday, is shooting just 24.7% from the field and the team wants him to develop his offensive game.

Guard Ty Jerome and two-way players Moses Brown and Josh Hall are also going to Orlando. “A lot of time and effort has gone into deciding who to send and when to send them,” Thunder head coach Mark Daigneault said. “We felt like sending the four of them together, all for different reasons developmentally, was the best decision.”

We have more G League transactions from Western Conference clubs:

The Clippers have already reportedly filled their two two-way slots, so it’s safe to assume Oturu signed a standard contract. It’s likely Oturu received a starting salary at or near the first-year minimum of $898,310, though terms were not disclosed.

The Kings only have two options now on Bogdan Bogdanovic: either they let him walk for nothing or they match Atlanta’s four-year, $72MM offer sheet.

While the Kings no longer have the opportunity to extract any assets in a Bogdanovic sign-and-trade, the team might be able to salvage some value by matching Bogdanovic’s offer and then trading Buddy Hield, opines Jason Anderson of The Sacramento Bee. However, as Anderson writes, conversations with people around the league suggest there are mixed opinions on Hield’s trade value.

One of Anderson’s sources referred to Hield as untradeable, while another said that there are likely multiple teams that value the sharpshooter, adding that the Kings would probably seek “a good young player or players and draft picks.”

While I don’t agree that Hield is untradeable, I expect it would be difficult for the Kings to extract fair value for one of the NBA’s best shooters if they match on Bogdanovic. Potential trade suitors know that Hield would probably welcome a change of scenery and that the Kings likely don’t want to pay both players long term, limiting the team’s leverage.

Here are a few more items from around the West:

Minnesota will now flip Detroit’s 2023 second-rounder, along with Immanuel Quickley‘s draft rights, to the Knicks for the draft rights to Leandro Bolmaro. The eventual outcome will be the same, but the order of operations will be a little different than anticipated.

NOV 18: The Knicks selected University of Minnesota center Daniel Oturu with the No. 33 pick but will ship him to the Clippers for a 2023 second-rounder, ESPN’s Brian Windhorst tweets.

That future second-rounder will be a pick that the Pistons owe the Clippers, Windhorst adds another tweet.

After selecting Dayton forward Obi Toppin with their lottery pick at No. 8, New York have been bouncing up and down the first and second rounds.

The Knicks acquired the No. 23 overall selection from the Jazz for the No. 27 and 38 picks, then shipped that pick to the Timberwolves for the No. 25 and 33 picks. They used the No. 25 pick on Kentucky point guard Immanuel Quickley, the SEC Player of the Year.

Oturu averaged 20.1 PPG and 11.3 RPG in 33.9 MPG as a sophomore last season. He’ll give the Clippers another big body that new coach Tyronn Lue can try to mold into a rotation piece.