Bucks coach Mike Budenholzer is defending Grayson Allen after he committed a Flagrant 2 foul Friday night that caused Bulls guard Alex Caruso to suffer a fractured wrist, tweets Eric Nehm of The Athletic. Allen has been accused of dirty play since he was in college, and Chicago coach Billy Donovan raised those allegations after Friday’s incident, saying that Allen “has a history of this.”

Speaking to reporters before tonight’s game, Budenholzer offered condolences for the injury, but said he doesn’t believe Allen did anything to purposefully put Caruso at risk.

“Competition is tough and there are things that happen in the games that are unfortunate,” Budenholzer said. “And I know that Caruso is going to miss some time and I feel for him. I don’t want that for any of our opponents, for anybody, but there was nothing that was done intentionally.”

The league office is still reviewing the play to determine if there will be further punishment for Allen, according to Vincent Goodwill of Yahoo Sports (Twitter link).

The Bulls are off to an outstanding 10-4 start and sign-and-trade acquisition DeMar DeRozan is a huge reason why. DeRozan scored 38 points against the Lakers on Monday, shooting 15-for-23 from the field, 2-for-5 from deep, and 6-of-6 from the line while adding six assists to an all-around great performance. Jamal Collier of ESPN writes that DeRozan is carrying “so many chips” on his shoulder, which he uses as motivation.

“I can go down the list of just being counted out, being looked over,” DeRozan said. “So many chips that’s on my shoulder that I carry. And just wanting to be a winner and wanting to enjoy this ride. We can’t play this game forever, so I want to get as much as I can out of it.”

“I never looked at age as being an issue,” DeRozan said. “I never looked at it. People put the age limit on everything, and I never did. The way I worked, the way I take care of my body, the way I prepare, I knew what I was capable of doing. I just took different roads the last couple years of playing basketball, trying to do the right thing, figuring it out.

“This time, just knowing my ability was always there, I never lost confidence. I never thought I couldn’t be who I was before. Chicago allowed me to completely be myself.”

Myles Turner led the NBA in blocks per game last season (3.4) and the Pacers‘ defensive rating was about five points better when the big man was on the floor. However, because he appeared in just 47 games and Indiana missed the postseason, he didn’t make an All-Defensive team and didn’t receive any votes for Defensive Player of the Year.

Speaking to Michael Scotto of HoopsHype, Turner expressed a desire to make up for that in 2021/22. Asked about his individual goals for the season, he said he wants to become an All-Star and would like to be recognized for his play on defense.

“I feel like I’m snubbed and haven’t gotten the credit I deserve in that department. I’ve led the league in blocks, and that looks good and all, but no All-Defensive Teams, not a lot of consideration for Defensive Player of the Year,” Turner said. “… I think I’m one of the better defenders in this league as far as my position. I’m versatile on defense. I’m not just a perimeter defender. I’m not just a shot blocker. There are different facets of my game that I think set me apart a little bit.”

The Pacers are off to a 5-8 start and remain outside of the playoff picture for the time being. However, Turner is proving once again that he can be force on the defensive end. His 3.2 blocks per game lead the NBA, and Indiana has a 100.5 defensive rating during his minutes, compared to 115.7 when he sits.

Some of those teams are in better shape than others. While the Warriors ($159.9MM) and Nets ($110.4MM) project to have nine-figure tax bills, the Raptors are barely into tax territory and should be able to sneak below the line, perhaps by waiving one of their two players who have partially guaranteed deals.

Besides Golden State and Brooklyn, the Clippers, Lakers, Bucks, and Jazz all have projected tax bills exceeding $33MM, according to Marks. The Sixers, Celtics, Blazers, and Raptors would owe less than $8MM each based on the current numbers.

Of course, these numbers can and will change over the course of the season as teams make roster moves, since tax bills are determined by the team’s year-end salary. For now though, the 20 non-taxpayers project to receive year-end payments of $12.7MM, Marks notes.

Here are a few more cap- and contract-related notes from around the NBA:

5:52pm: The Bucks have officially signed Allen to his extension, per NBA.com’s transactions log. The deal’s overall base value is lower than $20MM, according to Jim Owczarksi of The Milwaukee Journal Sentinel, who reports that it can be worth up to $19.5MM if certain team and player incentives are met. 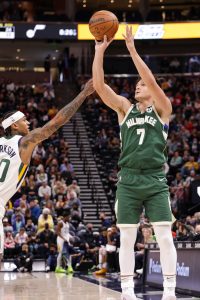 Allen, who is entering his fourth NBA season, had the best year of his career for the Grizzlies in 2020/21, starting 38 of 50 games and averaging 10.6 PPG, 3.2 RPG and 2.2 APG. The former Duke star has knocked down 39.5% of his 3-point attempts over the last two years while steadily increasing his volume.

The Bucks acquired Allen from Memphis over the summer in exchange for Sam Merrill and a pair of future second-round picks. He’ll play a rotation role on the wing in Milwaukee this season and would have been eligible for restricted free agency in 2022 if he hadn’t worked out a deal with the team today.

Allen’s two-year contract will give the Bucks some insurance in the event that they can’t complete a new contract with Donte DiVincenzo, who is also on track for potential restricted free agency next summer if he doesn’t sign an extension today. Allen’s new deal will pay him approximately the equivalent of the full mid-level exception.

Allen will earn just over $4MM this season before his extension goes into effect in 2022/23.

Speaking to Jabari Young of CNBC, Tom Gores admitted that he made a mistake early in his tenure as the owner of the Pistons by trying to take shortcuts to contention instead of being willing to be patient and endure some losing seasons while building the right way.

“I should’ve been better about the idea that you can’t always win, and you don’t win fast,” Gores said. “I think I’ve grown from that perspective. I’m not sure I understood the magnitude of the responsibility when you own a sports team in a town that is looking to you for inspiration.”

After spending several years in the middle of the pack in the Eastern Conference, Gores has embraced what general manager Troy Weaver calls a “restoration” of the franchise in the last couple years. The Pistons’ 20-52 record last season was their worst mark since 1993/94, but the team was able to add potential cornerstone Cade Cunningham to a promising young core this offseason, creating optimism for the future.

Zach LaVine and Bulls have been unable to reach a contract extension agreement this offseason. He said it won’t affect his performance or mindset heading into the season, Brian Windhorst of ESPN writes.

“What I can control is what I do on the court. That’s what I do best, I take care of business,” he said. “I’ll come into camp ready to be a good teammate and be a better leader every day and help my team win. I think that shows my value and I’ll let my business part speak for itself when the time comes.”

LaVine, who will make $19.5MM this season, could be the top unrestricted free agent on the market next summer unless he works something out with his current club. Given that the Bulls can’t offer more than about $105MM over four years on an extension, an in-season deal appears very unlikely.

Bulls All-Star shooting guard Zach LaVine is not worried about how he will mesh alongside new starting small forward DeMar DeRozan, per Sean Deveney of Heavy.com. Both players to this point have been primary scorers for their respective clubs.

“I don’t get that at all, because that’s just outside narratives,” LaVine said of the on-court collaboration with his pricey new Bulls teammate. “It’s our job to get out there and get to know each other, obviously personally and as a basketball player. It’s easy to make things work on the basketball court if you all have the same intent, and that’s winning.”