Pistons head coach Dwane Casey noted that he expects Okafor to be suited up and back on the court for Detroit within the next few days. Okafor’s recovery was expected to take six-to-eight weeks following the procedure, reported on February 10, so an imminent return fits with that projected timeline. Okafor has not played for the Pistons since January 30.

The No. 3 pick by the Sixers in the 2015 NBA draft, the 25-year-old Okafor has become a journeyman reserve as the league has moved away from score-first centers without a long-range shooting stroke. 2020/21 marks his first season with Detroit, on a two-year veteran’s minimal deal.

The 6’10” center has appeared in 12 games for the club, averaging 10.0 minutes per night, as rookie big man Isaiah Stewart has replaced Okafor in the rotational slot backing up starter Mason Plumlee.

Jahlil Okafor Out 6-8 Weeks After Procedure On Knee

Pistons center Jahlil Okafor will miss six to eight weeks after undergoing a surgical procedure to clean the lateral meniscus in his left knee, the team announced in a press release.

Okafor, 25, has been dealing with pain in both knees for a while and hasn’t played since January 30. He has appeared in 12 games this year and is averaging 4.3 points and 2.3 rebounds in 10 minutes per night. Rookie Isaiah Stewart has taken his spot in Detroit’s rotation.

Okafor was the third player picked in the 2015 draft, but he has turned into a journeyman, playing for four teams in the past four seasons. He signed a two-year contract with the Pistons in November at the veteran’s minimum.

DECEMBER 1: Okafor’s agreement with the Pistons is now official, the team announced in a press release.

NOVEMBER 20: The Pistons added another big man to their stockpile of frontcourt players, as they’re signing Jahlil Okafor to a two-year contract, Adrian Wojnarowski of ESPN tweets. Okafor will sign for the veteran’s minimum, Rod Beard of the Detroit News tweets.

Detroit has added a number of centers and power forwards in recent days. It drafted Isaiah Stewart in the middle of the first round on Wednesday and traded for Dewayne Dedmon. The Pistons also reached a three-year agreement with Nuggets free agent Mason Plumlee.

All this makes it more unlikely their top free agent, Christian Wood, will return. It’s still conceivable they could make a sign-and-trade deal with one of Wood’s pursuers.

In an extensive look at intriguing free agent Pistons big man Christian Wood, Kevin O’Connor of The Ringer offers some intel on Wood’s possible asking price in free agency and his potential suitors.

There is a significant disparity among O’Connor’s league sources in gauging the annual cost of Wood. Some speculate that Wood may net a deal in the range of the non-taxpayer mid-level exception – which starts at $9.3MM per year – while others think he could earn as much as $18MM a season, equivalent to the current yearly take of Pacers center Myles Turner with incentives. O’Connor expects both championship-caliber clubs looking to add size and young squads making a playoff push to have an interest in Wood’s services.

Rockets guard Eric Gordon hopes a weight-loss program over the hiatus will help him overcome the knee issues that have slowed him this season, writes Kelly Iko of The Athletic. A team source tells Iko that Gordon has managed to drop 12 pounds through diet changes and track sprints.

“I think Eric Gordon’s a big key for us,” coach Mike D’Antoni said recently. “He has the potential to put us over the top.” 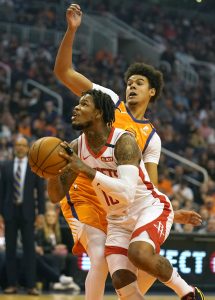 Ben McLemore, Rockets, 27, SG (Up) – Signed to a two-year, $4.3MM deal in 2019
If you’re in the same backcourt as James Harden and Russell Westbrook, you’re not going to have many opportunities to shoot. And when you do, you’d better make them. McLemore is making them. In his last three games, McLemore has averaged 13.3 PPG and knocked down 11 of 18 3-point attempts. Houston has shuffled its roster over the past month but as long as McLemore remains a perimeter threat, he’ll remain in the rotation. Houston needs to guarantee his modest $2.28MM salary for next season prior to free agency. It will be a surprise if the Rockets turn down that bargain.

Jordan Bell, Grizzlies, 25, PF/C (Down) – Signed to a one-year, $1.62MM deal in 2019
Bell wasn’t much of a factor with Minnesota this season, even when Karl-Anthony Towns missed some games due to injury or suspension. He got traded to Houston, which quickly flipped him to Memphis for Bruno Caboclo. Bell has only appeared in two games with the Grizzlies but there is a glimmer of hope. With injuries to Jaren Jackson Jr. and Brandon Clarke depleting the frontcourt, Bell could get an extended look in the next couple of weeks. He’ll have to show a lot more than he did in Minnesota in order for Memphis to extend a qualifying offer, which would make him a restricted free agent.

Jahlil Okafor, Pelicans, 24, PF/C (Down) – Signed to a two-year, $3.27MM deal in 2018
When the Pelicans were shorthanded last month in Detroit, Okafor erupted for 25 points, 14 rebounds, five assists and three blocks. He never left the bench the next four games, which shows how little he figures in the organization’s plans. Okafor has played a total of 25 minutes since that game against the Pistons. Once Zion Williamson got healthy, Okafor’s already spotty playing time virtually evaporated. His ability to score in the low post has lost much of its value since he was taken with the third pick in the 2015 draft. He’ll be seeking another second-unit opportunity this summer.

Bryn Forbes, Spurs, 26, PG (Up) – Signed to two-year, $6MM deal in 2018
Undrafted despite playing for a major college (Michigan State), Forbes has fit well with the blue-collar Spurs. After Danny Green was traded during the 2018 offseason, Forbes became a starter in his third year in the league. He’s held onto that role this season and continues to provide a perimeter option on a team lacking in that area. Forbes has been on fire this month, draining 47.4% of his 3-point attempts. Forbes will enter unrestricted free agency this summer and should get a nice raise and a multiyear deal, perhaps without changing uniforms.

Willie Cauley-Stein, 27, PF/C (Down) – Signed to a two-year, $4.46MM deal in 2019
When Dwight Powell suffered a season-ending Achilles tear late last month, the Mavericks opted to trade with Golden State for Cauley-Stein. It seemed like a great opportunity for Cauley-Stein to pump up his value on a playoff contender. It hasn’t worked out that way. Cauley-Stein’s role has been limited since joining the Mavericks and he hasn’t played since the All-Star break due to undisclosed personal reasons. It’s a good thing for WCS that he has a $2.29MM option on his contract for next season. It should come in handy the way things are trending.

Wisconsin Herd coach Chase Buford has been suspended two games without pay for a direct and extended public attack on the integrity and credibility of the game officials, according to a league press release. Among other comments, Buford called one of the officials a “clown” after his team, the Bucks’ G League affiliate, got outscored 48-20 in the fourth quarter and lost 126-117 to the Grand Rapids Drive on Sunday. Buford subsequently apologized for his tirade.

11:24am: New Orleans will pick up its $1.7MM option on center Jahlil Okafor for next season, tweets Malika Andrews of ESPN.

The third overall pick in 2015, Okafor revived his career after signing with the Pelicans as a free agent last summer. He appeared in 59 games, starting 24, and averaged 8.2 points and 4.7 rebounds per night. He impressed the coaching staff with his improved fitness and a commitment to defense, Andrews adds.

Okafor only has a $54K guarantee on next year’s contract, notes Bobby Marks of ESPN (Twitter link). He’ll have to remain on the roster through January 7 for it to become fully guaranteed.

Okafor is one of a handful of players with team options for 2019/20. The complete list is available here.