The Heat are among the teams that have reached out to the Raptors about veteran guard Kyle Lowry, league sources tell Michael Scotto of HoopsHype. Some of the players discussed in a possible deal include Goran Dragic, Kelly Olynyk and Kendrick Nunn, according to Scotto.

Lowry, who will turn 35 this month, continues to remain productive, averaging 18.0 points, 7.2 rebounds and 5.5 rebounds through 31 games. He recently pledged his loyalty to the franchise, but didn’t offer a guarantee that he will re-sign with Toronto when he becomes a free agent this summer.

As a one-year Bird player, Dragic has veto power over any trade, Scotto notes. If Dragic agrees to a deal and a new team declines his $19.44MM option for next season, his Bird rights will be reduced to Non-Bird when he enters free agency. Olynyk is headed for unrestricted free agency, while Nunn will be a restricted free agent if he receives a $4.7MM qualifying offer.

Scotto offers a few more tidbits in advance of the March 25 trade deadline:

Mavericks big man Dwight Powell, who is signed through the 2022/23 season, is showing good progress as he rehabs from a torn right Achilles, Callie Caplan of the Dallas Morning News reports. Powell, who underwent surgery in January, has no movement limitations. However, the closure of the Mavericks practice facility has created an obstacle to get on-court time. It typically takes an NBA player a year or more to return to action from an Achilles tear but the delayed start of next season should work in his favor.

Malik Beasley and Juan Hernangomez played their old team for the first time on Sunday, suiting up for the Timberwolves against the Nuggets, less than three weeks after being traded to Minnesota. Before the game, Hernangomez was the more nostalgic of the two former Nuggets, praising the organization and the fans in Denver, as Mike Singer of The Denver Post details.

“I’m the man who I am because (of) Denver, because (of the) organization, all the teammates, all the coaches,” Hernangomez. “I just want to (say) thanks to everybody for making my dream come true, make the chance to a kid who was dreaming about the NBA, make believe it and make it true.”

Beasley was more pragmatic about seeing his old team, per Singer: “It’s a business, put it like that. It’s not about personal life or anything like that. It’s just a strict business. That’s how you gotta take it.”

According to Nick Kosmider of The Athletic, the Nuggets offered Beasley a multiyear extension worth “north of $10MM annually” last fall. When Beasley turned down that offer, it increased the odds that he wouldn’t remain in Denver long-term.

As Kosmider explains, the Nuggets have “strongly hinted” that they’d like to re-sign Jerami Grant, and they’ll also have to negotiate new deals with Paul Millsap and Torrey Craig this summer if they intend to keep them, which reduced the team’s spending power for RFAs-to-be like Beasley and Hernangomez.

The Timberwolves‘ sign-and-trade deal for Jake Layman didn’t earn any accolades as one of the summer’s key moves, but Layman’s new team can’t stop raving about him, according to Jon Krawczynski of The Athletic. As Krawczynski explains, Minnesota loves Layman’s athleticism, his ability to play multiple positions, and the way he can complement star player Karl-Anthony Towns.

“A lot of our offensive creativity is going to be with Karl and the ball in his hands, whether that’s top of the key in a lot of our series or even at the elbows or even out of the post,” Timberwolves president of basketball operations Gersson Rosas said. “Guys that can space the floor, run the floor, cut away from the basket with high IQs are going to be important for us. A guy like Jake Layman can really do that and has done that throughout his career.”

It remains to be seen whether Layman will come off the bench or if he’ll crack the starting lineup alongside Towns, Andrew Wiggins, Robert Covington, and Jeff Teague. Either way, he figures to play a regular role in the Timberwolves’ rotation after being acquired in July from their division rivals in Portland.

Let’s round up a few more Northwest notes…

Point guard Tyus Jones became the first – and likely only – restricted free agent to sign an offer sheet this offseason when he inked a three-year deal with the Grizzlies last weekend. However, entering the summer, Jones hadn’t been planning to move on to a new team after spending the first four years of his NBA career with the Timberwolves, as he tells Jon Krawczynski of The Athletic.

“I think it’s just natural to look at it and see all the stars were aligning and assume that I’ve been here for four years and carved out a nice role in this team and you just kind of assume we’re going to figure it out here,” Jones said. “You don’t go into it thinking you’re going to be moving on to another team. Things happen. It’s a business and it’s always going to be a business. I’m just thankful and glad to have a team that’s so excited about me joining their family.”

According to Krawczynski, the Timberwolves did make an offer to Jones during the first week of free agency, but it was a four-year deal that started at just $4.2MM, with the final year non-guaranteed. Jones balked at that offer, and there was some “disenchantment” within his camp, says Krawczynski.

After what he called “the longest week or 10 days of my life,” Jones received an offer from the Grizzlies that was more in the ballpark of what the former first-round pick was seeking. The three-year deal will be worth about $8-9MM annually.

Here’s more on the Timberwolves:

JULY 8: The Timberwolves and Blazers have issued press releases to confirm that the trade is official. Portland will generate a small trade exception in the deal. 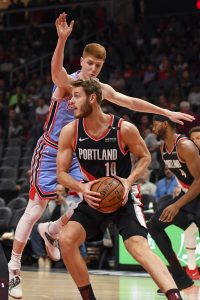 Layman is a restricted free agent whose rights are held by the Trail Blazers, but he won’t be signing an offer sheet. Instead, Minnesota will acquire him from Portland via a sign-and-trade arrangement, according to Wojnarowski.

“We’re extremely appreciative of how hard (Blazers president of basketball operations) Neil Olshey worked with us to accommodate what we were trying to accomplish in this sign and trade,” Bartelstein told Wojnarowski (Twitter links). “The deal couldn’t have happened without the Blazers looking out for Jake’s best interests.”

The Blazers will receive the draft rights to 2013 second-rounder Bojan Dubljevic in the deal, tweets Darren Wolfson of SKOR North.

Minnesota lost some shooting in its frontcourt by agreeing to trade Dario Saric to Phoenix and watching Anthony Tolliver sign with the Blazers. The Wolves will presumably look to replace those departed players with Layman and Noah Vonleh, who agreed to a deal with Minnesota earlier this week.

Speaking of Saric, the trade sending him to the Suns will need to be completed before the Wolves’ deal with the Blazers, since Layman will slot into the trade exception created by Saric’s departure, per ESPN’s Bobby Marks (Twitter link). That exception will be worth $3.48MM, so Layman’s starting salary is permitted to start at $3.58MM (trade exceptions have an extra $100K cushion).

The Wolves, whose interest in Layman was first reported by Darren Wolfson on Tuesday, will be hard-capped at $138.9MM for the 2019/20 league year as a result of acquiring a player via sign-and-trade.

The Mavericks have interest in free agent forward Marcus Morris, tweets Brad Townsend of The Dallas Morning News, confirming a report from Mike Fisher of DallasBasketball.com (Twitter link). However, Dallas has “a few [players] ahead” of Morris on their wish list, according to Townsend.

Danny Green is one of those names believed to be ahead of Morris. The Mavericks have been linked to the veteran sharpshooter since the start of free agency, and a tweet from the account for Green’s podcast today listed the Mavs, Raptors, and Lakers as the teams still in play for the veteran shooting guard. The Mavs aren’t expecting an answer from Green until tomorrow at the earliest though, says Townsend.

The Trail Blazers have tendered a qualifying offer to forward Jake Layman, the team announced today (via Twitter). ESPN’s Adrian Wojnarowski first reported (via Twitter) that Portland would give a QO to Layman to make him a restricted free agent.

The Blazers hold Layman’s Bird rights, so there will be no cap restrictions preventing the club from re-signing him. Portland does project to be a potential taxpayer though, so luxury tax considerations could dissuade the team from going too high on Layman if he draws interest from other suitors. His qualifying offer is worth $1,931,189, as we noted in our look at the Blazers’ cap situation last month.

Layman was the only Blazer eligible for restricted free agency this summer, so no further QOs are forthcoming. He’ll join teammates Al-Farouq Aminu, Seth Curry, Rodney Hood, and Enes Kanter – all of whom are unrestricted free agents – on the open market.

Scotty Hopson and Richard Solomon are both back on the free agent market after their 10-day contracts with the Thunder expired, according to the Real GM transactions page. Oklahoma City signed both players shortly before the All-Star break to reach the NBA’s roster limit. The team is back down to 13 players and will have two weeks to fill at least one opening.

Neither player saw any court time in OKC. Solomon has yet to appear in an NBA game, while Hopson played two games with the Cavaliers during the 2013/14 season and one with the Mavericks last year.