The Nets‘ season could be over in a matter of hours, as the team faces an elimination game at home on Monday night, down 3-0 to Boston in its first-round series.

While a first-round sweep would be a disastrous outcome for a club that entered the season as a championship favorite and would certainly increase scrutiny on head coach Steve Nash, one source close to the situation tells Substack writer Marc Stein that he doesn’t expect Nash to become a fall guy for a disappointing playoff run.

As Stein and his source observe, Nash has faced an inordinate number of challenges during the 2021/22 season, including Kyrie Irving‘s vaccination decision, James Harden‘s trade request, and injuries to players like Kevin Durant and Joe Harris. Stein suggests that Nash shouldn’t avoid blame for the Nets’ struggles, but says there are many larger issues in play as well.

Although Hornets owner Michael Jordan signed off on the decision to fire former head coach James Borrego, a source told Roderick Boone of The Charlotte Observer that president of basketball operations and general manager Mitch Kupchak was the driving force behind the move.

An embarrassing 29-point play-in tournament loss to Atlanta after suffering a 27-point defeat to Indiana in last season’s play-in was one reason Kupchak decided to move on from Borrego, according to Boone. The team’s poor defense — Charlotte was ranked 22nd in the regular season and gave up 132 points to Atlanta — was another.

The players also weren’t receptive to Borrego’s messages of late, per Boone, which was likely another factor that Kupchak considered before making his judgment.

The move stunned many people around the league, including an NBA agent who represents a Hornets player.

“I’m shocked,” the agent told Boone. “I’m kind of surprised. I thought he did a good job.”

11:56am: The Hornets officially announced in a press release that they’ve relieved Borrego of his duties as head coach. 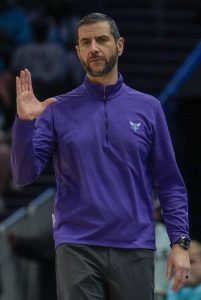 “I want to thank JB for his hard work and commitment during these past four seasons,” president of basketball operations Mitch Kupchak said in a statement. “Beyond his work as a coach, he is a tremendous person. I wish him and his family the best in the future. These decisions are always difficult. Having said that, we have a talented, young core of players which has me very excited about the future of the Hornets. We will begin the search for our new head coach immediately.”

Borrego is just one year removed from signing a contract extension with Charlotte. After having his option for 2021/22 picked up, Borrego agreed to a new deal that reportedly tacked on at least two years to his previous contract. However, it appears the Hornets are letting him go before that contract even takes effect.

A former Spurs assistant, Borrego was hired to replace Steve Clifford in 2018. He led the team to a 39-43 record in his first year, then posted a 23-42 mark in year two after losing Kemba Walker in free agency.

In the last two years, however, the Hornets had been taking positive steps forward, led by young cornerstones LaMelo Ball and Miles Bridges, in addition to veteran additions like Gordon Hayward and Terry Rozier.

Charlotte went 33-39 in 2020/21 and 43-39 this season, despite missing Hayward due to injuries for a significant portion of this year. In both 2021 and 2022, the team made the play-in tournament, but was blown out in its first game and eliminated from playoff contention.

As Wojnarowski observes (via Twitter), the decision to move on from Borrego is somewhat surprising, but it seems that Hornets leadership decided that the team’s poor play-in showings and lack of playoff berths negated the positive development shown by Ball, Bridges, and – prior to his 2021 departure – Devonte’ Graham.

Jake Fischer of Bleacher Report wrote earlier this month that there had been some speculation about the possibility of the Hornets replacing Borrego if the team didn’t make the playoffs, but Fischer said at the time there was a “heavier dose of optimism” that the head coach would stick around. One rival assistant GM told Bleacher Report “it would make no sense” to fire him, given the progress he had made with the team’s young core.

The Hornets will be the third team this offseason to launch a search for a new head coach, joining the Lakers and Kings.

The Hornets were exposed by the Hawks in Wednesday’s play-in game that ended their season, writes Roderick Boone of The Charlotte Observer.

As Boone outlines, the Hornets’ Achilles heel all year long was their defense and it was the weak link again on Wednesday in a 132-103 loss. Penetration into the paint was an ongoing issue, according to Boone, who suggests the Hornets lack any sort of intimidating interior presence and could badly use an athletic, shot-blocking center.

As Zach Kram of The Ringer observes, it was the second consecutive year in which the Hornets allowed more than 128 points per 100 possessions in an elimination play-in game, so addressing the defense has to be the team’s top priority this offseason. Besides acquiring a defensive-minded center, Charlotte could also benefit from adding a reliable wing who can capably guard opposing teams’ most dangerous perimeter players, Kram notes.

Here’s more on the Hornets as they prepare for their offseason:

People around the NBA have speculated for years about the possibility of Hornets president of basketball operations Mitch Kupchak leaving the organization or transitioning into more of an advisory role, but those whispers have intensified this year, according to Jake Fischer of Bleacher Report. As Fischer explains, Kupchak’s current contract with Charlotte is believed to expire at the end of this season.

It’s unclear at this point what Kupchak’s future holds, but Fischer says two names have frequently been cited as potential candidates for the top job in the Hornets’ front office if a change occurs. One is current assistant general manager Buzz Peterson, who was roommates with team owner Michael Jordan at UNC. The other is Bulls GM Marc Eversley, who interviewed for the job in 2018 before the Hornets hired Kupchak.

Hornets rookie guard James Bouknight was escorted to the locker room by team security after an altercation with coach James Borrego during Saturday’s game, writes Roderick Boone of The Charlotte Observer.

The incident began late in the third quarter when Miles Bridges was knocked to the ground in a collision and had to be removed from the game because he was bleeding. Borrego inserted Bouknight for the final 14 seconds of the quarter, which was the only playing time he saw all night.

After the quarter ended, Bouknight and Borrego had a “heated exchange” on the sidelines, according to Boone, and Bouknight seemed to take a step toward his coach before they were separated. He remained in the locker room for the rest of the game.

“Obviously we were all a little frustrated, all of us,” Borrego said after the 18-point loss to Miami, “in the third quarter, early fourth and it got a little emotional there. Beyond that I’ll leave it there.”

Borrego admitted that Bouknight is unhappy over a lack of playing time. The 11th pick in last year’s draft has gotten into just 25 games and is averaging 4.8 points and 1.5 rebounds in 10.0 minutes per night.

“As I’ve said before he’s in a tough spot,” Borrego said. “He obviously wants to play. I get that. I understand that. Look, he’s a kid that we believe in, we trust in and we are going to find more minutes for him, more time. So I won’t get into the specifics. Just two competitors trying to help this team.”

Boone notes that the public dispute comes at an especially bad time for Charlotte, which has lost five of its last seven games and has slipped into ninth place in the East. Anxiety over Thursday’s trade deadline is adding to the tension in the locker room.

Bridges, who emphasized the need for the team to remain united, reached out to Bouknight after Saturday’s incident.

Hornets coach James Borrego meets individually with LaMelo Ball at least twice a week to go over details that will aid the point guard’s development, Rod Boone of The Charlotte Observer writes. They are especially focused on reducing turnovers and fouls.

Hornets big man P.J. Washington is missing at least this weekend of game action as he deals with a hyperextended left elbow, writes Roderick Boone of the Charlotte Observer. In his third NBA season, Washington is averaging 9.9 PPG, 4.4 RPG and 1.4 APG.

“He’s in good spirits,” Charlotte head coach James Borrego said Friday. “We’ll know more in the next two days. He’ll get further evaluated by a specialist in the next day or two, probably on Monday and we’ll know more at that time. We’re not going to jump to conclusions yet. We’ll see what comes out of that and make a plan from there.”

AUGUST 9: Borrego’s extension with the Hornets is now official, the team announced today in a press release. 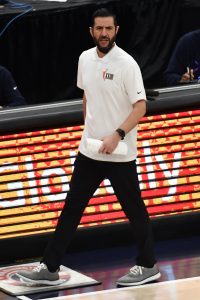 “We’re extremely pleased with the job that Coach Borrego and his staff have done in their three years in Charlotte,”president of basketball operations Mitch Kupchak said in a statement. “Coach and his staff have built a strong player development program and it has resulted in the continued improvement of our young players. He has implemented an exciting style that our team likes playing and our Hornets fans enjoy watching. Coach has built strong relationships with our players, has demonstrated a great knowledge of the game and has provided tremendous leadership for our group.

“We’re thrilled to have signed him to an extension and look forward to the future with him leading our team as we continue to grow and improve.”

Charlotte had already decided to pick up its option on Borrego’s contract for next season and this will give him more long-term security.

When Charlotte hired Borrego in 2018, he was given a contract with three guaranteed years, along with an option for the fourth. Although his record is just 95-124 with the Hornets, he has spent most of that time overseeing a rebuilding project.

Borrego was an assistant coach for eight years with New Orleans, Orlando and San Antonio before becoming a head coach. He served as an interim head coach with the Magic for 30 games during the 2014/15 season.

Of all the active head coaching searches around the NBA, the Magic‘s appears to be the most fluid, according to Jake Fischer of Bleacher Report. Kenny Atkinson, identified last week as a candidate for the job, has been the named most frequently linked to Orlando’s vacancy, says Fischer, but the search is expected to be wide-ranging.

Lakers assistant Jason Kidd has been connected more and more to the Magic’s opening, per Fischer, who notes that Kidd has a connection to Orlando general manager John Hammond — the two worked in Milwaukee together from 2014-17 after Hammond hired Kidd as the Bucks’ head coach.

Former Warriors assistant Jarron Collins has talked to the Magic, sources tell Bleacher Report. Fischer says Nets assistant Ime Udoka is another candidate league sources have “strongly linked” the Orlando job, though there’s a sense Udoka may have more interest in the Celtics‘ job. Sixers assistant Sam Cassell may also be on the Magic’s radar, according to Fischer, who says Cassell would be popular among Orlando’s returning players.