Timberwolves guard Jaylen Nowell had a rough time coming back from a right tibia contusion suffered on April 3, Chris Hine of the Minneapolis Star Tribune details. He tried to come back 10 days later and shot 1-for-14 from the field in two games. After taking some time off, Nowell returned on Friday and saw 25 minutes of action on Sunday against Orlando.

“It affected my shot the most,” he said. “I was really shooting off one leg and trying to come back, I came back a little too early; I came back when I was still hurting.”

Nowell, the team’s 2019 second-round pick, has a non-guaranteed $1.78MM contract for next season.

Timberwolves veteran Ricky Rubio praised rookie teammate Anthony Edwards and his toughness during the highs and lows of the season so far, Chris Hine of the Star Tribune writes.

Edwards, who was drafted by the team No. 1 overall last year, has shown flashes of potential during his first campaign. The 19-year-old is currently holding per-game averages of 15.4 points, 4.1 rebounds and 2.4 assists in 38 contests, though he’s shooting just 38% from the floor.

“When you’re young, every game and every situation it seems like it’s the end of the world sometimes when it’s not working,” Rubio said. “But his character is special. I said it from day one, I think we have a gem here. We have something that — he’s going to be really good in this league.”

Here are some other notes from the Western Conference tonight:

After playing limited minutes as a rookie, Timberwolves guard Jaylen Nowell has established himself as a regular rotation player in his second professional season. But the 21-year-old still remembers his “welcome to the NBA” moment, when he went up against Russell Westbrook during the last game of Minnesota’s 2019/20 season. 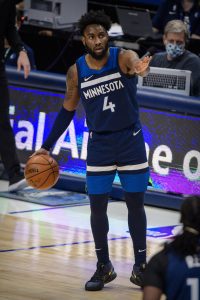 While fighting to earn more playing time in his second season, Nowell has adjusted to new protocols and routines both during and between games, as the NBA navigates the ongoing coronavirus pandemic.

“It’s been really crazy,” Nowell said of the 2020/21 campaign. “I actually forgot at a certain point that this is not how the regular NBA is.”

Nowell, who is averaging nearly 10 points per game this season, enjoyed a career night on Thursday in New Orleans to begin the second half. The 2019 second-round pick scored 28 points on 11-of-13 shooting from the field and 6-of-7 shooting from three-point range, adding six assists and five rebounds — and he did it all off the bench in just 28 minutes.

“It felt great,” Nowell said. “I felt really comfortable out there. I was bringing the ball up a lot, initiating the plays, so I kind of got to get into a rhythm without even shooting it.”

The performance came in a 135-105 victory over the Pelicans, which was the Timberwolves’ first win in nearly a month.

“That was amazing,” he said. “I honestly forgot what it felt like to come back to the winning locker room. It was definitely something we needed and to have it the first game after the All-Star break, it’s amazing. Hopefully we can keep this going.”

Last weekend’s All-Star festivities provided a much-needed break not only for a Timberwolves squad that had lost 13 of its last 14 games, but also for Nowell, who traveled to Seattle to see his family.

Before the break, the Timberwolves made a drastic in-season move, firing head coach Ryan Saunders and replacing him with Raptors assistant coach Chris Finch. While that sort of shake-up would throw some second-year players for a loop, Nowell isn’t unfamiliar with adjusting to a coaching change, having experienced one during his college recruitment process. Lorenzo Romar, the coach who recruited him to the University of Washington, had been replaced by Mike Hopkins by the time he began his college career.

“I’m kind of used to it,” Nowell said. “I wasn’t playing there, but it was a coaching change nonetheless. It was the year before I came in, so I was affected by it. I’ve dealt with it before.”

When Finch was hired, he spoke about simplifying and streamlining the Timberwolves’ schemes. According to Nowell, the team isn’t running a lot of plays and has been relying on the players to make more reads.

“We’ve been getting to show off our skills,” he said. “Not just for me individually, but as a team. It’s making us complement each other’s game more.”

Even though the Wolves have the youngest roster in the NBA, they possess an exciting mix of max-contract players, vets and youth. Nowell grew up watching a lot of the guys he now calls teammates.

“I used to watch guys like Ricky Rubio, Ed Davis, KAT (Karl-Anthony Towns), D’Angelo Russell,” he said. “I used to watch all these guys before I was even in the league. To call them my teammates, that’s already an accomplishment in itself. That’s been great, and being able to actually be around them and talk to them and see how they work and see how they approach the game that’s been great for me. I’ve just been watching and learning and trying to absorb everything and anything from them.”

Nowell has learned up close from Russell by watching the way he plays during games and by talking to him one-on-one.

“He’s an All-Star, so whatever he’s doing, it’s right,” Nowell said of Russell. “Every single game I’ve been watching how he picks spots; when he decides to shoot; when he decides to move the ball. I’ve been talking to him one-on-one about the point guard, how to facilitate, how to get guys in spots to put them in the best position for them to score not just myself.”

Nowell, who wants to continue to facilitate the ball at a high level by getting his teammates involved, believes the Timberwolves are making fewer mistakes than they did at the beginning of the year and envisions a strong finish to the team’s season. At 8-29, there’s nowhere for Minnesota to go but up.

Veteran forward/center Mike Muscala has been a regular, reliable rotation player for the Thunder so far this season, averaging a career-high 9.7 points per game to go along with 3.8 RPG and a .368 3PT% in 34 games (18.6 MPG). However, he received a DNP-CD in the team’s first game of the second half, with youngsters Aleksej Pokusevski and Moses Brown inserted into the rotation following their time in the G League.

“It took Mike out of the rotation, but Mike’s a pro and he’ll stay ready,” Thunder head coach Mark Daigneault said. “Those conversations with Mike are easy, and he makes it easy because of how professional he is.”

It was just one game, but both Pokusevski (14 points, eight rebounds) and Brown (eight points, 12 rebounds) looked good, and there’s no reason to expect the rebuilding Thunder to dial back their young players’ minutes the rest of the way. A playoff team may have more use for a low-cost bench player like Muscala, so he’ll be worth keeping an eye on as the March 25 trade deadline nears.

Star center Karl-Anthony Towns is with the Timberwolves on their current road trip and is a good bet to return to action at some point this week, team owner Glen Taylor told David Shama of Sports Headliners.

Towns, 25, has been limited to just four games so far this season due first to a wrist injury and then to a positive COVID-19 test. He has been in the NBA’s health and safety protocols for more than two weeks and hasn’t played since January 13.

Minnesota won its first two games of the 2020/21 season with Towns in the lineup, but has bottomed out since then, losing 15 of its last 18. Still, Taylor is hopeful that the club can make a push for a playoff spot this season, especially with a health Towns.

“I recognize that it’s going to be difficult, but on the other hand, there’s other teams that aren’t performing up to their expectations, too, and I guess we just gotta catch them,” he told Shama.

Cavaliers guard Dante Exum departed Monday’s game against Orlando in the opening minute with a right calf strain, according to Chris Fedor of the Cleveland Plain Dealer. He went down with a non-contact injury and eventually hobbled to the bench, unable to put weight on his leg. Cleveland players spoke with optimism regarding the injury after the game, Fedor tweets.

Here are Tuesday’s G League assignments and recalls from around the NBA:

Here are Wednesday’s assignments and recalls from around the NBA:

Here are Saturday’s G League assignments and recalls from around the league: