With Ja Morant sidelined on Monday due to left ankle soreness, Tyus Jones showed why the Grizzlies made him the NBA’s highest-paid backup point guard this past summer, writes Damichael Cole of The Memphis Commercial Appeal. Inserted into the starting lineup, Jones responded by scoring 28 points and dishing out 10 assists en route to an impressive Memphis win over Miami.

While we could quibble over whether Jones is technically the NBA’s highest-paid backup point guard (Russell Westbrook is coming off the bench in Los Angeles while earning more than three times as much), the Grizzlies point guard is perhaps the league’s highest-paid point guard who signed his contract expecting to be a backup — even if he doesn’t think of himself that way.

Morant’s absence and Jones’ promotion gave Grizzlies rookie Kennedy Chandler the rare chance to play a major role off the bench, and he logged a season-high 26 minutes in the win over the Heat. As Evan Barnes of The Memphis Commercial Appeal details, Chandler has taken advantage this season of the opportunity to lean from the two veteran point guards ahead of him on the depth chart, but admits he has had to adjust to not playing regularly.

“It’s hard. It’s the first time I’ve ever dealt with this. My whole entire life I’ve played 30 minutes (a game),” Chandler said. “This is a business, it’s a growing up moment for me to just keep my mind right.”

JULY 6: The Grizzlies have officially signed Chandler, according to the transactions log at NBA.com. 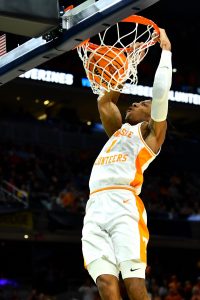 According to Charania, Chandler’s rookie contract contains $4.94MM in guaranteed money, which is the most an American second-rounder has ever received.

A four-year, minimum-salary contract would have been worth $6.94MM, so Chandler will likely receive a little more than the minimum in his rookie season.

The Grizzlies acquired Chandler in a draft-day trade from the Spurs in exchange for the Lakers’ 2024 second-round pick and cash. He was the 38th selection of the 2022 NBA draft.

Although he stands just 6’0″, Chandler is an excellent athlete and has a reputation as a strong defender. The 19-year-old recorded the highest max vertical leap (41.5″) and the second-fastest shuttle run (2.89) among all participants who were tested at the NBA draft combine in May.

Chandler is a true point guard, capable of distributing and getting to his spots at a high level. He’s currently starting for Memphis’ Summer League squad against Philadelphia in Salt Lake City, recording six points, three rebounds, three assists, two steals and two blocks through nearly three quarters of action, per ESPN.

As Chris Herrington of The Daily Memphian observes (Twitter links), Chandler’s deal is pretty similar to the contract Xavier Tillman received from the Grizzlies as the 35th pick in 2020 ($6.5MM over four years, with $4.6MM guaranteed). The Grizzlies had to use part of their mid-level exception to give Chandler a four-year deal, Herrington notes.

JUNE 24: The trade is now official, the Spurs announced in a press release. The Grizzlies have also announced the deal, indicating in their press release that they’re sending the Lakers’ 2024 second-round pick to San Antonio.

JUNE 23: The Grizzlies are acquiring Tennessee guard Kennedy Chandler, the No. 38 pick, from the Spurs, sources tell Shams Charania of The Athletic (Twitter link).

ESPN’s Adrian Wojnarowski reports (via Twitter) that the Spurs will receive a future second-rounder and cash in exchange for the No. 38 pick.

Chandler’s local ties likely played a factor in Memphis’ decision to trade for him, as the team had plenty of opportunities to scout him. Although he’s just 6’0″, likely causing his draft stock to fall, Chandler is an excellent athlete and a strong defender. He’s a true point guard, capable of distributing and getting to his spots at a high level.

The Grizzlies are trading De’Anthony Melton to the Sixers, so they had a hole to fill in the backcourt depth chart. It will be interesting to see if the decision to acquire Chandler has an impact on the impending free agency of backup point guard Tyus Jones.

The Pistons could go in a variety of directions with the No. 5 pick in the upcoming draft, writes James L. Edwards III of The Athletic. According to Edwards, while Purdue guard Jaden Ivey or Iowa forward Keegan Murray seem most likely to be selected, Arizona swingman Bennedict Mathurin enjoyed a good workout with the club and has impressed Detroit’s front office personnel.

Edwards acknowledges that the versatile Murray seems more readily capable of contributing at the next level than Ivey. The 6’8″ forward, himself a consensus All-American and 2021/22 All-Big Ten honoree while with the Hawkeyes, averaged 23.5 PPG, 8.7 RPG, 1.9 BPG, 1.5 APG and 1.3 SPG across 35 games.

Mathurin projects to be a solid long-range shooter and wing defender, Edwards writes. Mathurin was a consensus All-American and the 2021/22 Pac-12 Player of the Year during his second season with the Wildcats, averaging 17.7 PPG, 5.6 RPG and 2.5 APG. During his sophomore season, the 6’7″ guard boasted shooting averages of .450/.369/.764.

Despite some chatter out of Europe regarding his future, veteran Bucks big man Serge Ibaka, an unrestricted free agent this summer, intends to remain in the NBA next season, per Emiliano Carchia of Sportando.

Carchia notes that Italian EuroLeague club Virtus Bologna, winners of the 2021 Italian Serie A, would be interested in adding Ibaka, but the team has not made any formal outreach to the 32-year-old. Before joining the NBA for the 2009/10 season, Ibaka played for two Spanish pro clubs: Bàsquet Manresa and EuroLeague powerhouse Real Madrid.

Last year while with the Clippers and Bucks, Ibaka posted his most modest numbers since his 2009/10 rookie season with the Thunder. For the regular season, the 6’10” power forward/center averaged 6.8 PPG and 4.6 RPG across 16.2 MPG.

Ibaka, a former three-time All-Defensive Team selection and a champion with the Raptors in 2019, played even more minimally in the postseason for Milwaukee. He appeared in only six of the Bucks’ 12 playoff contests this year, averaging 1.5 PPG and 1.7 RPG in just 3.7 MPG when he did play.

Kenny Atkinson could become the Hornets‘ next head coach by the end of the upcoming week, a source tells Roderick Boone of The Charlotte Observer, though he cautions that the team still hasn’t reached a final decision. A report on Friday identified Atkinson as the frontrunner for the job, and Boone indicates that momentum for him has been building since last month’s draft combine.

Atkinson has been tied up with his duties as an assistant coach for the Warriors, but with three days between Games 2 and 3 of the NBA Finals, he should have time for a face-to-face meeting with team owner Michael Jordan. Boone notes that an in-person session with Jordan was the last step before James Borrego was hired four years ago.

The Hornets are intrigued by Atkinson’s experience, history of developing young players and emphasis on defense, Boone adds. The Finals could last through June 19, which would limit Atkinson’s input into preparations for the June 23 draft. According to Boone, Borrego’s former assistants are working behind the scenes and are waiting to see if they will be part of the new coach’s staff.

Christian Wood is entering the final year of his contract and the Rockets need to get some value for him or extend him at a reasonable price, according to John Hollinger of The Athletic, who believes it would be prudent to move him if the Rockets can get a decent first-rounder for him, given that they can get a starter-level big man with their lottery pick. If they don’t extend Wood or get a strong trade offer this summer, they can still deal him at the trade deadline, Hollinger adds. Hollinger and Kelly Iko of The Athletic discuss how the Rockets’ offseason might play out.

The NBA has revealed its list of 76 players who have been invited – and who are expected to attend – next week’s draft combine in Chicago. The combine workouts will take place from May 18-20.

Over the course of the week, players will conduct interviews with NBA teams, participate in five-on-five games, and go through shooting, strength and agility drills.

While several of the prominent names at the top of the draft likely won’t participate in scrimmages, those top prospects are still expected to attend. That group includes Chet Holmgren, Jabari Smith, Paolo Banchero, and Jaden Ivey.

A handful of standout players from the G League Elite Camp could be invited to participate in the combine as well.

Here’s the full list of 76 names announced by the NBA today, in alphabetical order, per Shams Charania of The Athletic (Twitter link):

Chandler is a projected first-round pick, according to Givony, who ranks him at No. 17 on ESPN’s big board. The six-foot point guard averaged 13.9 PPG, 4.7 APG, 3.2 RPG, and 2.2 SPG on .464/.383/.606 shooting in 34 games (30.8 MPG) for the Volunteers, earning a spot on the All-SEC Second Team and All-Freshman team. He also led Tennessee to an SEC tournament championship and was named MVP of the tournament.

As Givony outlines, Chandler improved as the season went on, becoming a more vocal leader, improving his shooting, and playing strong defense.

“Adjusting to the speed of the college game was the big thing early on,” Chandler told ESPN. “Coach [Rick] Barnes had me watching a lot of Chris Paul and Tony Parker film. Learning how to make different reads, and understanding that every team is going to have a different game plan.

“… I want to show NBA teams how much stronger I will get through the pre-draft process. Being ready to play with physicality in the NBA, a six-foot guard like me can play with anybody in the league. Just being coachable, cerebral, that’s how I can separate myself in this process.”