Kevin Knox takes responsibility for his failure to establish himself with the Knicks, according to Zach Braziller of the New York Post.

“I had my fair opportunity; didn’t make the best of it, unfortunately,” Knox said.

The ninth pick of the 2018 draft was traded to Atlanta last season, then signed a two-year contract in free agency with the Pistons.

“Got to move on, got to play harder, learn from it,” he said. “Learned a lot playing under (Tom Thibodeau), playing here in New York. I have to take it to my next chapter.”

We have more from the New York teams:

The Cavaliers clearly have four of their starting roles set, with All-Star guards Darius Garland and Donovan Mitchell sharing the backcourt alongside Evan Mobley and All-Star center Jarrett Allen in the frontcourt. For the small forward gig, it appears that Isaac Okoro is making a case for himself, writes Chris Fedor of Cleveland.com.

The 6’5″ wing was selected by Cleveland with the fifth pick out of Auburn in 2020. Okoro has started 128 of his 134 career NBA games thus far. Through two seasons, he is averaging a fairly modest 9.2 PPG, 3.0 RPG, 1.9 APG, and 0.9 SPG, but the Cavaliers will be looking for defense more than offense at the three.

The competition has boiled down to Okoro and Caris LeVert, writes Fedor, noting that LeVert – who has earned praise from head coach J.B. Bickerstaff in camp – has started most of the team’s 2022 preseason games.

“I’m always being myself,” Okoro said. “I know what the coaches want me to do. I’m gonna do that and it’s ultimately up to J.B. to see who starts. I’m fine either way. I’m gonna go in and play my role.”

Marvin Bagley III‘s knee injury is the latest mishap for a Pistons team that will start the season with a diminished frontcourt, writes Mike Curtis of The Detroit News.

Nerlens Noel, who was acquired from the Knicks in an offseason trade, is reconditioning after plantar fasciitis and hasn’t played during the preseason. Rookie center Jalen Duren hurt his shoulder last week, but was able to return Tuesday. Newly acquired Bojan Bogdanovic sat out Tuesday’s game with a strained calf, and Alec Burks, Kevin Knox and Hamidou Diallo are all dealing with injuries as well.

“It’s part of the NBA,” coach Dwane Casey said. “That’s one reason (general manager Troy Weaver) has done a good job of bringing multiple guys in. Unfortunately, the multiple guys are (sitting out, injured) behind the bench. I think it’s a freak thing. I do know that some of the guys that were behind the bench — Kevin, (Diallo) — if it was a regular season game, they’d be able to go. That’s refreshing to know that.”

“I’ve been hearing those things,” the Cavaliers forward said. “But I’m just focused on my basketball because you cannot control that. That’s why whenever I stepped on a court I was just working on my game and trying to get better. It’s been six years since coming over, six years in Cleveland. I’m happy here and this is my home.”

Those rumors persist and the franchise would like to upgrade at small forward, if possible, though the fact that Cleveland is close to the luxury tax line complicates the issue, Fedor adds.

Breakout seasons from Marvin Bagley III, Kevin Knox and Killian Hayes would go a long way toward a much improved season for the Pistons, Keith Langlois of Pistons.com writes. All three lottery picks have yet to fulfill their promise but could become part of the team’s core group if they establish a firm foothold in the NBA this season.

Bagley was re-signed on a three-year, $37MM deal this summer, while Knox received a two-year, $6MM contract after passing through two organizations. Hayes is entering his third year with the Pistons and projects as the second-unit floor leader.

Matthew Dellavedova‘s new one-year, minimum-salary contract with the Kings, originally reported as partially guaranteed, is actually non-guaranteed for the time being, Hoops Rumors has learned.

Dellavedova will receive a partial guarantee of $250K if he’s not waived before Sacramento’s first game of the regular season, then would lock in his full $2.63MM guarantee if he remains under contract through the NBA’s league-wide guarantee deadline of January 7.

McGruder received a one-year deal, James Edwards of The Athletic tweets, though the contractual terms are unclear. Detroit already had 15 players with guaranteed contracts on its roster before both signings, along with filling both of its two-way spots.

Knox reportedly received a two-year, $6MM deal. Detroit will have to clear roster space via a trade or eat some guaranteed money to get down to 15 by training camp — the most logical odd man out is Kemba Walker, who is still expected to be bought out by the Pistons, but if McGruder got a guaranteed contract, another move will be required.

The Hawks did not tender a qualifying offer to Knox this summer, making him an unrestricted free agent. 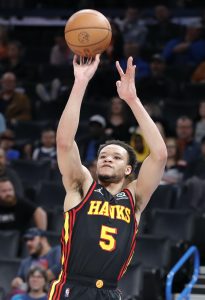 Knox has never scaled those heights again in his successive three NBA seasons of action. The 22-year-old has yet to average better than half of that scoring mark across three unproductive seasons with New York and the Hawks, to whom he was traded in January.

After head coach Tom Thibodeau took over in 2020, Knox found himself a fringe rotation player, averaging 11.0 MPG in just 42 games during the team’s playoff-bound 2020/21 season.

Last year, Knox cameoed in just 13 games with the Knicks before being dealt to Atlanta. In 17 games with the Hawks, Knox averaged just 6.5 MPG. The Hawks did not tender a qualifying offer to Knox this summer, making him an unrestricted free agent.

The Spurs have issued a qualifying offer to guard Lonnie Walker, making him a restricted free agent, according to Jeff McDonald of The San Antonio Express-News (Twitter link). The qualifying offer will be worth $6,311,564.

Unlike some of this summer’s top restricted free agents, Walker wasn’t a lock to receive that qualifying offer, given the up-and-down season the 23-year-old had in 2021/22. He averaged a career-high 12.1 PPG and 2.2 APG, but saw his shooting percentages dip to 40.7% from the floor and 31.4% on threes, well below his career rates. Furthermore, a report earlier today stated that Walker was unlikely to remain in San Antonio.

By issuing the qualifying offer, the Spurs are at least opening up a path for Walker to return, either by accepting the one-year QO or by negotiating a new deal with the team. However, McDonald says there’s an expectation that Walker will “fully” test the market.

Spurs swingman Joe Wieskamp also received a qualifying offer, making him a restricted free agent, tweets McDonald. Because Wieskamp was promoted from his two-way deal to a standard contract last season, his qualifying offer will be worth approximately $1.8MM ($200K more than his minimum salary).

Here are a few more qualifying offer updates from around the NBA: