Trail Blazers guard Damian Lillard and Warriors forward/center Draymond Green are among the first players to commit to Team USA ahead of the Tokyo Olympics, sources tell Shams Charania and Joe Vardon of The Athletic.

Team USA figures to bring more than a dozen players to its initial camp this summer before paring down the roster to 12 for Tokyo, so Lillard’s and Green’s commitments don’t guarantee that they’ll be part of the final Olympic roster. However, it seems safe to assume that spots on the 12-man squad will be reserved for the two stars as long as they remain healthy and committed.

Green won a gold medal at the 2016 Olympics, while Lillard has yet to play for Team USA in a major international tournament. Green and Lillard are two of the 57 names listed as part of USA Basketball’s initial player pool in March, though as we noted last week, many of the players on that list seem unlikely to participate for a variety of reasons, including injuries.

Here are a few more updates from around the international basketball world:

Free agent shooting guard Marco Belinelli is headed back overseas to continue his playing career, as Italian team Virtus Bologna confirmed today in a press release that it has signed Belinelli to a three-year contract.

By returning to his home country of Italy, Belinelli will reunite with his first professional team — he began his career with Virtus Bologna in 2002 at age 16.

It’s not clear whether or not Belinelli’s new deal will have NBA outs. Either way, it’s possible he has played his last NBA game.

After playing limited minutes and sitting in crunch time during the Pelicans‘ first two games – both losses – Zion Williamson logged 25 minutes and was a key contributor down the stretch as New Orleans closed out a Monday win over Memphis. After the game, Williamson told ESPN’s Malika Andrews that he “felt alive again,” per Andrew Lopez of ESPN.

“I ain’t gonna lie to you, it’s just different in a bad way when I’m on the bench in the fourth quarter, and there’s nothing I can do to help my team win,” Williamson said. “So I said I felt alive — it was just great to be out there doing whatever I can to help my team win.”

In addition to Williamson’s contributions, the Pelicans also got 24 points and some key late baskets from Brandon Ingram, while Josh Hart chipped in 15 points and Lonzo Ball was a game-best +15. The performances prompted head coach Alvin Gentry to praise his young core after the win.

“When you have two really young players (Williamson and Ingram) like that who stepped up for you, and Josh Hart, you know, Josh is a very young kid, too,” Gentry said. “I think if you look at it, we have a good, young nucleus of players along with some of the veteran guys we have.”

Belinelli Will Look To Remain In NBA In Free Agency

Whenever the NBA’s 2020 offseason eventually arrives, Marco Belinelli‘s contract will expire and he’ll reach the open market as an unrestricted free agent. Addressing his upcoming free agency in an interview with L’Avvenire (hat tip to Eurohoops.net), the Italian guard didn’t close the door on a potential return to Europe, but stressed that his goal is to remain in the NBA.

“The priority is to stay on an NBA team to try and win another title,” Belinelli said. “But I don’t rule out other options.”

Belinelli, who turned 34 in March, began his professional career in Italy, playing for Virtus Bologna and Fortitudo Bologna from 2002-07. However, he has been in the NBA since being drafted by Golden State in 2007, spending the last two seasons in San Antonio with the Spurs.

A productive role player for over a decade, the former first-round pick has seen his role shrink in 2019/20. Belinelli has averaged just 5.8 PPG in 15.0 MPG off the Spurs’ bench — he hasn’t posted numbers that low since he was a 21-year-old rookie in 2007/08. The veteran’s shooting percentages, including a .391 FG%, are also below his career rates, though he’s still making 36.8% of his three-point attempts.

Given his age and his declining NBA role, it wouldn’t be a huge shock if Belinelli opted to finish his career in Europe, where he’d be more of a primary option and could perhaps earn more than the NBA’s minimum salary. However, based on his comments about pursuing another title, it sounds like his offseason goal will be to catch on with a contending NBA team.

The Spurs are “looking at everything” and weighing a variety of potential paths at the trade deadline, ESPN’s Adrian Wojnarowski said on a Sunday podcast with Bobby Marks. At 22-26, San Antonio is 1.5 games behind the eighth-seeded Grizzlies and is at risk of missing the postseason for the first time since the turn of the century. The club will have to decide whether to push to continue that streak, take a step back and retool, or simply stand pat.

Having spoken with executives around the NBA, Jabari Young of CNBC Sports says there’s a belief the Spurs want to push for the playoffs. “They are 100% obsessed with getting that eighth seed,” one executive told Young.

If that’s the case, it wouldn’t make sense for San Antonio to trade DeMar DeRozan or LaMarcus Aldridge. However, moving Rudy Gay is a scenario that rival executives consider more realistic, Young suggests.

“If they get a nice asset back, I think they would do something with Rudy Gay, but I think their asking price is too high,” an exec told Young.

Here’s more on the Spurs: 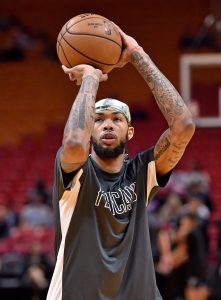 Brandon Ingram, Pelicans, 22, SF (Up) – Signed to a four-year, $23.8MM deal in 2016
More appropriately, Ingram’s stock is way, way up. Ingram’s last season with the Lakers was cut short by a blood clot issue. He averaged 18.3 PPG but there was still skepticism just how good Ingram was. He’s answered that emphatically in his first 13 games with the Pelicans, posting All-Star level numbers (26.1 PPG, 7.2 RPG, 4.2 APG, 45.9 percent on 3s). The Pelicans will make him a restricted free agent by extending a $9.48MM qualifying offer. Will Ingram re-sign with New Orleans, sign a big offer sheet, or sign the QO and test unrestricted free agency the following summer? For sure, he’ll get paid.

Courtney Lee, Mavericks, 34, SG (Down) – Signed to a four-year, $48MM deal in 2016
Lee’s value to Dallas is mainly his expiring contract, which could prove useful as the Mavs look to acquire another piece to their vastly improved squad. Lee’s playing time has been mainly limited to garbage-time minutes. After two solid seasons with the Knicks, Lee’s career has declined the past two seasons. His 3-point prowess (38.7 percent for his career) might earn him a short-term deal next summer but he won’t be making anywhere near $12MM next season.

Gerald Green, Rockets, 33, SG (Down) – Signed to a one-year, $2.56MM deal in 2019
Have we seen the last of Green in the NBA? That’s a strong possibility, considering his age and long-term rehab from a foot injury. He underwent surgery in late October and is expected to miss the regular season and likely the postseason as well. Green, a 12-year NBA veteran, has made prior stops with Boston, Minnesota, Houston, Dallas, New Jersey, Indiana, Phoenix and Miami during his professional career. He was a major contributor off the Rockets’ bench last season, averaging 9.2 PPG and 2.5 PPG in 73 contests. Another veteran’s minimum deal is his best hope.

Marco Belinelli, Spurs, 33, SG (Down) – Signed to a two-year, $12MM deal in 2018
Belinelli’s perimeter shooting has made him one of the league’s most reliable second-unit players for years. The shooting touch has abandoned him, one of the many reasons the Spurs have struggled this season. Belinelli is shooting just 29 percent from the field while averaging 5.2 PPG. He has averaged in double figures off the bench for the past four seasons. Gregg Popovich has continued to give him steady minutes, so Bellinelli’s production should return to the norm. But if his playing time is reduced, he may have to settle for the veteran’s minimum next summer.

Dillon Brooks, Grizzlies, 23, SF (Up) – Signed to a three-year, $3.8MM deal in 2017
Brooks was limited to 18 games last season, mainly due to a toe injury that required surgery in January. He has come back at full strength and started every game this season for the Grizzlies. He’s the team’s third-leading scorer at 13.3 PPG while making 38.7 percent of his 3-pointers. It’s a foregone conclusion the Grizzlies will extend a $2MM qualifying offer to make him a restricted free agent this summer. The 2017 second-round pick will get a substantial pay raise regardless of how his free agent journey unfolds.

Carmelo Anthony has not been on an NBA roster since last November when his Rockets tenure abruptly ended after a 10-game stint. Ever since then, Anthony has been searching for one more opportunity to prolong his Hall of Fame career — which has yet to arise.

In an in-depth feature, ESPN’s Baxter Holmes examines Anthony’s situation from the day he was cut to the present. Carmelo’s story is one of a declining star who has struggled to adjust from his usual role of a primary scorer to a role player.

Holmes also spoke to several team sources who noted that Anthony’s reputation exceeded his current abilities, which put Houston in a tough situation.

We’re just two days away from FIBA’s 2019 World Cup officially tipping off, and more national teams have officially set their 12-man rosters for the event, including a pair of countries whose squads will feature multiple NBA players.

Team Germany made its final cut this week, dropping Wizards youngster Isaac Bonga from its roster. Even without Bonga on the team, there are plenty of familiar faces for NBA fans — Dennis Schroder (Thunder), Daniel Theis (Celtics), and Maxi Kleber (Mavericks) will represent Germany in this year’s tournament.

Here are more details on teams that have established their 12-man World Cup rosters:

Lakers forward Kyle Kuzma helped his bid to earn a World Cup roster spot in Team USA’s exhibition opener, writes Kyle Goon of The Orange County Register. Playing in front of front of a partisan crowd in Anaheim that chanted for him every time he touched the ball, Kuzma contributed seven points, five rebounds and three assists in Friday’s win over Spain.

Kuzma is considered on the bubble to make the final roster, even after a series of big-name stars pulled out. He says he’s following the orders of coaches Gregg Popovich and Steve Kerr, who have asked him to contribute in non-glamorous parts of the game such as defense, rebounding, getting loose balls and making the right decision when the ball is in his hands.

“I’m not one to really grade my performances, but I think my energy was at a high level,” Kuzma said after the game. “That’s the only thing I can really control.”