Nets guard Kyrie Irving won’t be in attendance at the team’s Media Day on Monday, according to Zach Lowe and Brian Windhorst of ESPN (Twitter link). However, Lowe and Windhorst say Irving will accompany the team to its training camp in San Diego, and Malika Andrews of ESPN (Twitter link) cites a team spokesperson who says Kyrie will talk to reporters via Zoom later today.

Irving’s status will be an important storyline to follow this preseason. A report last week indicated that Irving remains unvaccinated against COVID-19 — that’s especially problematic in New York, where the city requires individuals to be fully vaccinated in order to gather in indoor venues. Those regulations may prevent Irving from practicing or playing with the Nets in Brooklyn.

As Matt Sullivan of Rolling Stone detailed in a fascinating report over the weekend, Irving has emerged as one of the NBA’s most high-profile anti-vaxxers and seems unlikely to easily budge from his stance. However, his teammate and good friend Kevin Durant didn’t convey any concern during his Media Day appearance on Monday morning, telling reporters that the team trusts in Irving and expects to have the whole roster available “at some point” (Twitter link via Brian Lewis of The New York Post).

NOVEMBER 20: The deal is official, according to the Timberwolves. Because Minnesota structured its draft-night trades slightly differently than expected, the trade technically sends Bolmaro’s rights to the Wolves in exchange for Quickley (No. 25), the Pistons’ 2023 second-round pick, and the draft rights to Mathias Lessort.

All of this offseason’s trades to date can be found right here.

NOVEMBER 18: The Knicks selected Argentinian guard Leandro Bolmaro with the No. 23 pick, which they previously acquired from the Jazz, but he’s not going to New York. The Timberwolves are acquiring Bolmaro for the No. 25 and No. 33 selections in the draft, Shams Charania of The Athletic tweets.

The Knicks had originally acquired the 23rd pick from Utah for the No. 27 and 38 selections, so they essentially parlayed those original picks and moved up a few slots in both the first and second rounds. They used the No. 25 pick on Kentucky point guard Immanuel Quickley, the SEC Player of the Year.

With the Timberwolves selecting shooting guard Anthony Edwards with the first pick and acquiring veteran guard Ricky Rubio, they have reshaped their backcourt overnight. Bolmaro would appear to be a developmental selection or possibly a draft-and-stash prospect.

Minnesota will now flip Detroit’s 2023 second-rounder, along with Immanuel Quickley‘s draft rights, to the Knicks for the draft rights to Leandro Bolmaro. The eventual outcome will be the same, but the order of operations will be a little different than anticipated.

NOV 18: The Knicks selected University of Minnesota center Daniel Oturu with the No. 33 pick but will ship him to the Clippers for a 2023 second-rounder, ESPN’s Brian Windhorst tweets.

That future second-rounder will be a pick that the Pistons owe the Clippers, Windhorst adds another tweet.

After selecting Dayton forward Obi Toppin with their lottery pick at No. 8, New York have been bouncing up and down the first and second rounds.

The Knicks acquired the No. 23 overall selection from the Jazz for the No. 27 and 38 picks, then shipped that pick to the Timberwolves for the No. 25 and 33 picks. They used the No. 25 pick on Kentucky point guard Immanuel Quickley, the SEC Player of the Year.

Oturu averaged 20.1 PPG and 11.3 RPG in 33.9 MPG as a sophomore last season. He’ll give the Clippers another big body that new coach Tyronn Lue can try to mold into a rotation piece.

Doc Rivers will be in the spotlight with Kawhi Leonard and Paul George both joining the Clippers, but his training for dealing with superstars dates back to his early days as a coach in Orlando, writes Andrew Greif of The Los Angeles Times. Rivers had just completed his first year as a head coach in the summer of 2000 when the Magic signed both Grant Hill and Tracy McGrady, forming what was expected to be a super-team of that era.

“(Clippers president of basketball operations) Lawrence Frank did more research than any human being is possible to do,” Rivers said. “And I thought (former Magic general manager) John Gabriel did the same thing. That’s why we were successful in Orlando getting Tracy and Grant, and that’s why we’ve been successful today.”

In both cases, the free agent jackpot was preceded by a decision to trade a franchise player — Anfernee Hardaway in Orlando and Blake Griffin in L.A. Rivers insisted that both franchises remain competitive rather than tanking after the deals, believing that was the best way to lure free agents. George confirmed the value of that decision.

“You could just see their connection on the court,” he said of last year’s team. “Everybody pulling for one another, everybody elevated their games to be part of that camaraderie. That’s what made it such an attractive spot.”

The Heat have officially acquired Jimmy Butler from the Sixers in a sign-and-trade deal that also includes the Trail Blazers and the Clippers, according to press releases from Miami and Philadelphia.

The Heat also acquired big man Meyers Leonard from the Trail Blazers and cash considerations from the Clippers. Miami sent shooting guard Josh Richardson to Philadelphia, center Hassan Whiteside to the Blazers and a conditional first-round pick to the Clippers. The Clippers also received forward Maurice Harkless from Portland and the draft rights to 2017 second-round pick Mathias Lessort from the Sixers.

The Clippers and Blazers have also confirmed the swap.

The 2023 first-rounder that the Heat forwarded to the Clippers, which is lottery-protected through 2025 and unprotected in 2026, was subsequently moved to the Thunder as part of the agreed-upon Paul George blockbuster.

Butler inked a four-year, $141MM contract with the Heat. Miami waived forward Ryan Anderson and stretched his contract in order to stay below the hard cap and complete the sign-and-trade.

“Jimmy’s leadership, tenacity, professionalism, defensive disposition and his ability to create his own shot will improve our roster immediately,” Miami president Pat Riley said in the press release. “Any time you can add a four-time All-Star to your roster, you make that move. Meyers is a versatile big, a great shooter, can play inside and block shots. The addition of both men puts us in a great position to win.”

The disgruntled Butler was dealt by Minnesota to Philadelphia last season. The Sixers wanted to retain Butler but couldn’t convince him to stay and got something for him via the sign-and-trade mechanism. In 65 total games for the Wolves and Sixers last season, Butler averaged 18.7 PPG, 5.3 RPG, 4.0 APG, and 1.9 SPG with a .462/.347/.855 shooting line. Richardson averaged a career-high 16.6 PPG and 4.1 APG last season.

Blazers president of basketball operations Neil Olshey called the acquisition of Whiteside an “impact move for our roster.” The Blazers were looking for a starting center with Jusuf Nurkic on the mend from a serious leg injury.

7:58pm: The 2023 first-round pick being sent from the Heat to Clippers will be lottery-protected through 2025, then unprotected in 2026, tweets Anthony Chiang of The Miami Herald. 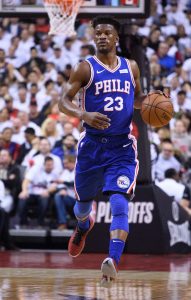 5:00pm: The Clippers will receive a protected 2023 first-round pick from the Heat in the deal, according to ESPN’s full report.

4:17pm: The sign-and-trade deal that will send Jimmy Butler to the Heat and Josh Richardson to the Sixers has been agreed upon, according to ESPN’s Adrian Wojnarowski and Zach Lowe (Twitter link).

As Wojnarowski explains (via Twitter), the trade between the Trail Blazers and Heat that will send Hassan Whiteside to Portland is becoming part of the transaction, with Maurice Harkless being re-routed to the Clippers to make it a four-team deal.

As part of the four-team swap, the Sixers will send the draft rights to 2017 second-rounder Mathias Lessort to the Clippers, reports Keith Pompey of The Philadelphia Inquirer (Twitter link).

As of now then, this is what the deal would look like:

After acquiring Harkless, the Clippers will still have a maximum-salary slot available in the event that Kawhi Leonard decides to join them, tweets Marks. It would be a tight fit though, notes ESPN’s Zach Lowe, who tweets that the club might have to renounce a couple of small cap holds. Obviously, if Leonard decides to go elsewhere, that wouldn’t be necessary.

As for the Heat, they had let Goran Dragic‘s camp know that they’d likely to need to move the point guard in order to complete the Butler acquisition, but that shouldn’t be necessary after all, tweets Barry Jackson of The Miami Herald.

Still, as Marks points out (via Twitter), Miami will have to make an additional move to make sure it gets below the hard cap $138.9MM that applies to teams that acquire a player via sign-and-trade. Waiving and stretching Ryan Anderson‘s contract looks like the most logical path for the Heat.

We have more details in other stories on the Butler/Richardson aspect of this deal, as well as the Blazers’ Whiteside acquisition.

Sixers’ draft-and-stash prospect Mathias Lessort has signed a two-year deal with Spain’s Unicaja Malaga, according to Eurohoops.net. The 6’9” Lessort, 22, played in Serbia last season for Red Star Belgrade and averaged 8.5 PPG and 5.7 RPG in 30 games. Lessort was the 50th overall pick in 2017.

Another of the Sixers’ 2017 draftees has found a home for the coming season, as Serbian team KK Crvena Zvezda – also known as Red Star Belgrade – announced today (via Twitter) that it has signed second-rounder Mathias Lessort to a three-year contract.

Lessort, who was ranked as 2017’s 32nd-best prospect by DraftExpress, was viewed as a borderline first-round pick entering the draft, but ultimately slipped to Philadelphia at No. 50. The 6’9″ forward/center played for Nanterre 92 in France last season, averaging 10.2 PPG and 7.2 RPG in 36 French League contests.

The Sixers had four picks in this year’s draft, but after selecting Markelle Fultz with the No. 1 pick, the club focused on draft-and-stash prospects. Philadelphia used its second first-rounder – No. 25 overall – on Anzejs Pasecniks, who will spend the 2017/18 campaign with CB Gran Canaria in Spain. The team also had the No. 36 pick, and drafted Jonah Bolden, who will play in Israel for Maccabi Tel Aviv.

While Lessort’s deal with Red Star Belgrade was announced as a three-year pact, I’d be surprised if it doesn’t include NBA outs that will give the 21-year-old an opportunity to make the leap to the Sixers a year or two from now.

One of the Sixers‘ second-round picks in 2017, French forward Mathias Lessort, has bought himself out of his deal with Bamberg and is negotiating with Red Star Belgrade, tweets international basketball reporter David Pick. Lessort is expected to play at least one more season – and perhaps more – overseas before heading to Philadelphia.

Here are a few more international items of interest:

The Hawks are planning on using their 19th overall pick in the NBA Draft on the best player available and Paul Millsap‘s contract situation will not change that, per Chris Vivlamore of the Atlanta Journal-Constitution (links via Twitter).

Hawks general manager Travis Schlenk told Vivlamore for a separate story that Millsap “might get better offers than we can make him.” Despite Atlanta’s desire to retain the four-time All-Star, the team is focused on assembling the best roster possible and worry about Millsap — or replacing him — afterward.

“You draft the best talent available regardless who is on your roster. … I think that’s when you get in trouble, when you draft off need not off talent,” Schlenk said. “Especially the way the league is going where guys are interchangeable and guys are multi-positional, you just take the best player.”

The Hawks went 43-39 last season, making the postseason as the fifth seed in the Eastern Conference. However, last year’s prized offseason acquisition Dwight Howard struggled in the postseason and expressed his issues with his lack of playing time; the team is also facing several potential departures in unrestricted free agency, such as Ersan Ilyasova, Kris Humphries and Mike Muscala. While those decisions will shape the 2017/18 Hawks, the club will look to attain the strongest asset in the NBA draft before worrying about anything else.

Below are notes from around the Southeast Division: