Thunder players Luguentz Dort, Mike Muscala and Ty Jerome will all be out for the rest of the 2021/22 season following surgeries to address various ailments, per a team press release.

Dort had an operation to treat a torn labrum in his left shoulder. Muscala had a scope and lateral ligament repair on his right ankle. Jerome, who has been dealing with a hip injury, went under the knife for what the Thunder term to be a sports hernia, and could return in just eight weeks. Oklahoma City anticipates that Dort and Muscala will be ready to play in time for the beginning of the 2022/23 NBA season.

Muscala had reportedly been considering an offseason surgery to address the ankle injury — it appears he opted to accelerate that timeline. The news of Dort and Jerome requiring surgeries comes as more of a surprise.

At 20-44, the rebuilding Thunder are currently the No. 14 seed in the Western Conference. The extended absences of Dort, Muscala and Jerome – all rotation players – for the rest of the year should help Oklahoma City’s tanking efforts.

According to Joe Mussatto of the Oklahoman (via Twitter), Thunder head coach Mark Daigneault said that the country’s top sports doctors were occupied with NFL Combine obligations over the last week, which led to all these surgeries all transpiring on the same day.

Dort, still just 22, has emerged as one of the Thunder’s best players. In 51 games this year, the defensive-oriented swingman averaged 17.2 PPG, 4.2 RPG, 1.7 APG and 0.9 SPG. “It’s gotta be pretty significant for a specialist to recommend surgery,” Daigneault said of the labrum tear, per Mussatto (Twitter link).

As Bobby Marks of ESPN tweets, the Thunder hold a $1.9MM team option for Dort for 2022/23. Should Oklahoma City pick up the option, the team could then offer him a four-year, $58MM contract extension before he reaches unrestricted free agency in 2023. The club could also turn down that team option to make him a restricted free agent this offseason.

Thunder guard Shai Gilgeous-Alexander will return to action on Thursday after missing the team’s last 10 games due to a right ankle sprain, head coach Mark Daigneault said today (Twitter link via Joe Mussatto of The Oklahoman). Gilgeous-Alexander suffered the injury on January 28.

The 18-40 Thunder are 6.5 games back of the No. 10 seed and aren’t expected to prioritize making the playoffs this season, so it’s safe to assume they wouldn’t be bringing back Gilgeous-Alexander if he weren’t feeling 100% healthy.

The star point guard had been averaging 22.7 PPG, 5.5 APG, and 4.7 RPG shooting in 43 games (34.6 MPG) before going down with his ankle injury. He has struggled to score efficiently this season, however, posting career-low shooting percentages of 42.4% from the floor and 27.8% on threes.

Rookie guard Josh Giddey has been thriving with Gilgeous-Alexander out of the lineup, having recorded three consecutive triple-doubles in the games leading up to the All-Star break. He likely won’t have the ball in his hands as much with SGA on the court, so Daigneault may have to get creative with his lineups and his rotation to ensure Giddey doesn’t lose that momentum.

According to Daigneault, Jeremiah Robinson-Earl (foot), Mike Muscala (ankle), Ty Jerome (hip), Luguentz Dort (shoulder), and Kenrich Williams (knee) are still sidelined. Daigneault didn’t offer any guarantees when asked if Muscala, who is considering offseason ankle surgery, will be back this season (Twitter links via Mussatto).

Nuggets forward JaMychal Green, one of the team’s top remaining trade candidates, showed his value on Tuesday night, pouring in 20 points on 6-of-7 shooting in just 17 minutes, writes Mike Singer of The Denver Post. Green and his $8.2MM cap hit could be necessary if Denver makes a move for a small forward, but the veteran suggested after Tuesday’s game that he’s not worried about being the subject of trade rumors.

“I’m still getting paid, man, first and the 15th,” Green said with a laugh, according to Singer.

Of course, Green has reason not to be concerned. The contract he signed in the offseason gives him the ability to veto a trade, and Singer has reported that the 31-year-old likely wouldn’t approve a move to a non-contender. That will increase the level of difficulty for the Nuggets as they consider their options today.

Trail Blazers center Jusuf Nurkic is enjoying the best season of his career and he doesn’t want to see it disrupted by a trade, writes Jason Quick of The Athletic. Along with averaging 14.7 points and 10.9 rebounds per game, Nurkic has provided a strong interior presence for a defense that was the league’s worst last season. Fivethirtyeight.com’s RAPTOR rating has Nurkic as the eighth-best defender in the league.

Even so, Nurkic is considered to be a trade candidate because of his $12MM expiring contract. He said Joe Cronin talked to him after taking over as interim general manager and promised to keep him as part of the core in Portland.

“Nothing is 100 percent, but I feel like for the team, and who I think I am as a player, there is no way I’m leaving (in a trade),” Nurkic said. “I don’t see anything possible. Obviously, I want to be part of this organization as long as (Damian Lillard) is, and as long as we want to win. But if the team wants to go in a different direction, then I’m willing to do whatever they want to do.”

Though O’Neale is still averaging a fairly modest output of 7.4 PPG, 4.8 RPG, and 2.2 APG, along with an excellent 2.2 SPG, Jones contends that O’Neale’s consistent three-point shooting and his improved cutting away from the ball have made him a player that opposing defenses need to respect. This could improve the Jazz’s outlook in the postseason.

“This is what I’ve been trying to train for in the offseason,” O’Neale said of how he hopes to help the Jazz. “I want to do whatever I have to do for us to win. Whether that’s guarding the best player, or knocking down shots. I’m just trying to not be tired and to play the whole game, if I can.”

As the Thunder‘s roster has undergone a teardown in recent years, one of the most surprising constants has been big man Mike Muscala, who has spent the last two seasons in Oklahoma City. On the surface, a veteran role player like Muscala seems like an odd fit for a team in the midst of a full-fledged rebuild, but he said during his end-of-season interview in May that his time with the franchise has helped him “a lot as a man and as a player.”

As Paris Lawson of OKCThunder.com writes, the Thunder appreciate Muscala’s dedication to the team and rewarded him this offseason with a two-year, $7MM deal that’s fully guaranteed for the 2021/22 season.

“I am tremendously grateful and very moved by the way he feels about the team and the organization,” executive VP of basketball operations Sam Presti said. “I think he really connects with the vision that we have for what we stand for and how we try to operate on a day-to-day basis. We’re not trying to be all things to all people, but there are going to be people that really thrive in this environment and enjoy it, and those are also the people that really help make it what it is.”

Here’s more on the Thunder:

In an Instagram video, ESPN’s Bobby Marks broke down two of the Nuggets’ contracts, clarifying that Will Barton is on a descending two-year deal, with $30MM fully guaranteed. He’ll receive $15.6MM in year one and $14.37MM in year two. Keith Smith of Spotrac adds that Barton’s deal includes $1MM in unlikely bonuses in each of the two years.

Marks also outlined Nuggets’ forward Jeff Green‘s new contract, which is a two-year, $9MM pact with $1MM in bonuses. Green will have a player option in year two, as had been previously reported. Marks notes that Green had been on minimum-salary contracts for several seasons, so this contract represents a big win for him and his agent.

AUGUST 12: The Thunder have officially re-signed Muscala, per a team press release. 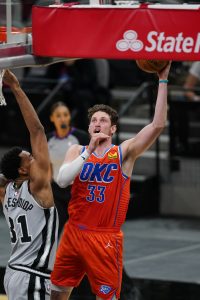 AUGUST 2: The Thunder will re-sign free agent big man Mike Muscala to a two-year, $7MM contract, per Adrian Wojnarowski of ESPN (via Twitter).

Bobby Marks of ESPN notes (Twitter link) that Muscala had Earl Bird rights with the Thunder, so Oklahoma City won’t need to use a portion of its mid-level exception to complete the signing.

He was drafted out of Bucknell with the No. 44 pick in 2013, and logged time with the Hawks, Sixers, and Lakers. Muscala, 30, then joined the Thunder for the first time as a free agent in the summer of 2019.

Suns star Devin Booker is ready to produce in the playoffs after Phoenix’s six-year postseason drought, Duane Rankin of the Arizona Republic writes.

“It’s been a long journey since I’ve been here,” Booker said. “A full six years to get to this point and I know it’s been even longer for the city of Phoenix and this organization to get to this point. So I don’t want to take these opportunities for granted. We gave the fans what they wanted with a playoff berth and now, we want to give them even more of what they asked for.”

Booker is looking to create something special in Phoenix, finishing with 34 points, seven rebounds and eight assists in a Game 1 victory over the Lakers on Sunday. The team will host Game 2 on Tuesday.

There’s more out of the Western Conference tonight:

The rebuilding Thunder shut down big men Al Horford and Mike Muscala in the second half of the 2020/21 season, with neither veteran playing a single minute after the March trade deadline. Muscala is now facing unrestricted free agency, while Horford has two years left on his contract, including a partial guarantee in the second year.

Asked today about their respective futures, neither player sounded certain he’d be back in Oklahoma City in ’21/22, but Muscala said he’d “love to be here” going forward, as Joe Mussatto of The Oklahoman tweets. Meanwhile, an offseason trade to a team closer to contention seems like a realistic next step for Horford, and he didn’t rule out that possibility.

“I’m sure that I’ll be talking with the team and we’ll figure out what’s best,” Horford said, per Mussatto (Twitter link).

Here are a few more notes from around the Northwest: