Europe’s largest basketball tournament will tip off Thursday morning for the first time in five years. EuroBasket 2022 will feature more than 30 NBA players, including stars such as Nikola Jokic, Giannis Antetokounmpo, Luka Doncic and Rudy Gobert.

Twenty-four teams are involved, with four nations hosting preliminary games, leading up to the gold medal contest Sept. 18 in Berlin, Germany. The tournament used to be held every two years, but it was switched to four-year intervals beginning in 2017. It was delayed an extra year because the Olympics had to be pushed back from 2020 to 2021 due to COVID-19.

Slovenia is the defending champion, with Goran Dragic earning MVP honors in 2017. He didn’t play internationally last year, but has returned to help defend the title, according to Eurohoops.

“A challenging tournament is ahead of us, which we are all looking forward to,” Dragic said. “The championship will be one of the most even ever, as most of the national teams have their strongest possible rosters. As professional athletes, we naturally prefer to play against the best. This gives us additional momentum and presents us with a great challenge. We trained well, the team is ready and we can’t wait for the opening match against Lithuania.”

A full schedule for the event, including the opening matchup between Bulgaria and Spain, is available at ESPN.

Serbian forward Nemanja Bjelica has been ruled out for this week’s World Cup qualifiers due to a calf injury and is considered questionable for the upcoming EuroBasket tournament, as Johnny Askounis of Eurohoops details.

Bjelica, who signed with Turkish club Fenerbahce this offseason after winning a title with Golden State, will miss Serbia’s contest against Greece today, as well as Sunday’s game vs. Turkey. Serbia’s EuroBasket schedule will tip off on Friday, September 2 against the Netherlands.

The opportunity to earn guaranteed money was behind Markus Howard‘s decision to sign with Baskonia Vitoria-Gasteiz in the EuroLeague, he explained on the Role Player Podcast. Howard spent the past two seasons with the Nuggets on a two-way contract, and although he had two-way offers from other NBA teams, he opted for more security in Europe.

“Two years, that’s what I was saying,” Howard explained of his commitment to the NBA. “Because honestly I could have taken a two-way with a lot of teams now and maybe had more chances to play. Maybe. But at the end of the day, I’m not going through what I went through in Denver. I ain’t doing that again. I have a family. It’s not just me. … I want to earn my keep. I want to feel like I earned what I get.”

Howard appeared in 31 games last season and 37 games as a rookie, but he only averaged 5.6 minutes per night. He became frustrated by the inconsistent playing time and the constant uncertainty about his NBA future.

“I don’t look the part,” said Howard, who’s only 5’10”. “So they have no problem throwing you to the side. … Being in college for four years, you don’t get comfortable, but you understand where you are in your position on a team. In the NBA, you never know and you’re walking on tippy toes. For me, just having that mindset every day, like I could be gone.”

In a move that has been rumored for nearly six weeks, Nemanja Bjelica has signed with Fenerbahce in Turkey, the team announced (via Twitter). His contract will cover two seasons, according to Johnny Askounis of Eurohoops.

After winning a championship with the Warriors last season, the 34-year-old forward returns to Europe, joining the team he played for before deciding to join the NBA in 2015. He was named EuroLeague MVP that season and helped Fenerbahce reach the league’s Final Four for the first time in history.

Bjelica was a rotation player for Golden State during the regular season, averaging 6.1 points, 4.1 rebounds and 2.2 assists in 71 games while playing 16.1 minutes per night. His role diminished somewhat in the playoffs, although he still appeared in 15 games during the Warriors’ title run.

Golden State reportedly wanted to bring him back on a minimum contract, but Bjelica opted to take the Fenerbahce offer, which gives him similar money and a larger role.

The Wizards selected Bjelica with the 35th pick in the 2010 draft and traded him to the Timberwolves on draft night. He played seven NBA seasons, also spending time with the Kings and Heat. He is currently in training camp with the Serbian national team in preparation for EuroBasket.

JaMychal Green officially became a free agent on Friday when he cleared waivers. That opens up a path for Green to sign with the Warriors. He’ll provide necessary depth at forward, since Golden State lost Otto Porter Jr. to Toronto and Nemanja Bjelica decided to play in Europe. Green is a proven 3-point threat and can guard multiple positions, Anthony Slater of The Athletic writes.

After winning a title with the Warriors this season, veteran forward Nemanja Bjelica is headed back to Europe. 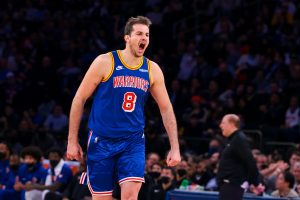 Bjelica has agreed to sign a two-year contract with Turkish powerhouse Fenerbahce, according to a report from Ugur Ozan Sulak of SocratesDergi.com (Twitter link). The deal will have a total net value of about $4MM, per Johnny Askounis and Aris Barkas of Eurohoops.

Golden State had been interested in re-signing Bjelica to a minimum-salary contract, according to Anthony Slater of The Athletic (Twitter link), but were informed today that he’d be leaving the NBA for one of his former teams overseas. Before he arrived in the NBA, Bjelica played for Fenerbahce for two seasons from 2013-15, earning EuroLeague MVP honors in ’15.

After spending six NBA in Minnesota, Sacramento, and Miami from 2015-21, Bjelica joined the Warriors for his seventh season and made 71 regular season appearances for the club this past year, averaging 6.1 PPG, 4.1 RPG, and 2.2 APG with a .362 3PT% in 16.1 minutes per game.

Having won an NBA championship for the first time, the 34-year-old presumably liked the idea of returning to the EuroLeague, where he’ll earn a similar salary and have a far more significant role.

Warriors wing Andre Iguodala isn’t prepared to say whether or not he intends to continue his NBA career beyond this season, writes Mark Medina of NBA.com.

“We’ll wait until we see how it ends. It can go either way with wins or losses,”  Iguodala told Medina. “I know my answer. But I don’t want to put it out in the world. I don’t want to get in trouble.”

Due to a left cervical disc injury, Iguodala hasn’t seen any action since Game 4 of the Warriors’ first-round series vs. Denver. He made it through practice on Wednesday without restrictions and said he’s “doing everything I need to do around the clock” in an effort to be available for the NBA Finals, according to Medina.

For now, Iguodala is listed as questionable for Game 1 of the NBA Finals on Thursday, as are Gary Payton II (left elbow fracture) and Otto Porter Jr. (left foot soreness), per Anthony Slater of The Athletic (Twitter link). Like Iguodala, Payton and Porter took contact in Wednesday’s practice. The Warriors will announce closer to game time whether the three veterans will be active for Thursday’s contest.

The season is unraveling for the Warriors at a really bad time, writes Kendra Andrews of ESPN. Golden State fell to the Lakers Saturday night, extending its losing streak to four games for the first time this season. The team has fallen into third place in the Western Conference after going 2-8 in its last 10 games, and Stephen Curry understands that something needs to change.

The Warriors are dealing with a variety of issue, with the most notable being the absence of Draymond Green, who hasn’t played since January 9 but hopes to be back in “a couple weeks.” However, the problems go beyond Green, Andrews adds, as Golden State has been struggling with missed free throws, a drop in bench production and executing late in games, which coach Steve Kerr blamed for Saturday’s loss.

“I thought we had several chances to really break this game open,” Kerr said. “This has kind of been a pattern during this bad spell for us. We are not stepping on teams when they are down. We are making mistakes and allowing teams to hang around. And when you do that in this league, you’re dead.”

At 29-7, the Warriors have the best record in the NBA, a half-game ahead of the Suns. One key to the team’s success this season has been the maturation and development of third-year guard Jordan Poole, who’s being groomed to become Golden State’s new sixth man, as Anthony Slater and Marcus Thompson II of The Athletic detail.

Poole’s situation on the club is unique, in that he’s the only young player to have a consistent rotational role. He describes the dynamic as being akin to a middle-child.

“The dynamic is what you see,” Poole said. “I’m not the youngest. I’ve been around for a little bit, but I’m kind of like the only one in the middle of the pack. The older bros have been through it. Sometimes we’re gonna throw you with the young guys, sometimes you can come with us. Essentially, it’s the middle-child treatment.”

Slater and Thompson write that Poole is known for having an excellent work ethic; the Warriors have data showing he’s in the gym more than any player on the team. Veteran Andre Iguodala, the team’s former sixth man, has taken Poole under his wing. As a third-year former first-round pick (28th overall in the 2019 draft), Poole is eligible for a rookie scale extension this summer.

“The new sixth man is getting $20 million a year,” Iguodala said. “That’s the bottom offer for a guy like that, the Tyler Herros and Jordan Pooles. You got those few guys who are starters but for teams they are on, they’re sixth men. You don’t have a problem with going above and beyond taking care of them because you know they’ll be a staple player for your franchise.”