Bulls wings DeMar DeRozan and Zach LaVine have exhibited improved chemistry in recent games, K.C. Johnson of NBC Sports Chicago writes. The Bulls have scored 121 or more points over the last four games, and both players surpassed the 30-point mark in a win over Utah on Saturday.

“It’s coming along. We had a lot of trial and error early on where you saw the inconsistency,” DeRozan said. “We’re just finding our rhythm, sharing the ball, understanding our spots.”

We have more on the Bulls:

JUNE 29: Bradley’s opt-in is official, according to RealGM’s transactions log.

However, Zach LaVine‘s $29.25MM cap hold moves the Bulls over the salary cap threshold. Assuming LaVine re-signs on a maximum-salary deal, the Bulls would have the full $10.5MM mid-level exception available, but using all of it would likely push them into luxury tax territory.

Bradley’s exact opt-in salary is $2,036,318, less than the projected minimum of $2,104,726 he could receive if he declines the option and signs a new deal. That suggests Bradley wasn’t confident about receiving another guaranteed contract in free agency.

A new contract for Zach LaVine will be among the Bulls‘ top priorities for the offseason, writes Bobby Marks of ESPN. LaVine, who has been a bargain on the four-year, $80MM offer sheet that Chicago matched in 2018, ranked 58th in the league in salary this season at $19.5MM, Marks notes.

Coming off back-to-back All-Star appearances, LaVine is eligible for a five-year max contract worth approximately $212MM. The only concern for the Bulls is durability, Marks adds, as LaVine missed 15 games this season, which was the fewest in his five years in Chicago.

Eleven of those games were due to soreness in his left knee, which had to be surgically repaired in 2017, and LaVine will likely have surgery on the knee again this offseason. His current contract contains a clause that protects the Bulls in case of a catastrophic injury to the knee, but the team shouldn’t expect him to agree to that in a new deal, according to Marks.

Knicks forward Julius Randle has exited the NBA’s health and safety protocols, the team announced today (via Twitter). Randle, who only entered the protocols last Thursday, will be listed as questionable for Tuesday night’s game vs. Indiana.

The Knicks were hit hard in December by COVID-19, but are in pretty decent shape for the time being. Nerlens Noel is the only player on the roster who is still in the protocols.

The league continues to be ravaged by COVID positives with an increasing number of players entering the league’s health and safety protocols. Here are the latest updates:

Pat Connaughton can become a free agent next summer but he’s very comfortable playing for the Bucks, Eric Nehm of The Athletic writes. Connaughton feels his versatility is valued by the defending champions.

“I mean, that’s kind of what I’ve hung my hat on my whole career,” he said. “Obviously, high school and college is a different level of basketball than the NBA, but while stats in high school and college piled up for me, it was really about finding ways to win games and I would play any position that was needed. And I think the NBA is the NBA, it’s harder to crack that role. But I found a home here, I found a place where it’s valued and I’ve tried to find ways to impact winning throughout each and every single game.”

Connaughton holds a $5.73MM player option on his contract for next season.

New starting Bulls point guard Lonzo Ball anticipates that he will operate more as a “traditional” point guard within Chicago’s offense, writes Rob Schaefer of NBC Sports Chicago. Ball suggested that with his prior team, the Pelicans, he served more as a wing who sought openings for jump shots and defended across a variety of positions than a true point guard.

“Just getting back to being more of a traditional point guard where I’m comfortable at,” Ball said during the Bulls’ Media Day. “Last year was different for me, but whatever coach asks me, I’m going to do to the best of my abilities. This year, it’s looking like I’m going to be playing point guard a lot, so that’s what I’m trying to do.” 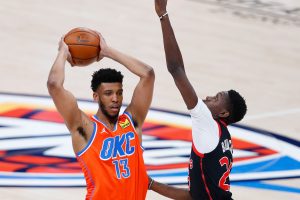 AUGUST 4: The Bulls have reached an agreement to sign free agent center Tony Bradley, according to multiple reports.

Chris Haynes of Yahoo Sports (Twitter links), who first reported the agreement, says it’s a two-year deal, with a player option on year two. According to ESPN’s Adrian Wojnarowski (Twitter link), it’ll be a minimum-salary contract.

Bradley, 23, was the 28th pick in the 2017 draft and spent his first three NBA seasons as a reserve big man in Utah, playing limited minutes. After being traded multiple times, he spent the 2020/21 season with Philadelphia and Oklahoma City, averaging 7.1 PPG and 5.7 RPG in 42 games (16.3 MPG) for the Sixers and Thunder.

While he’s not as flashy as the Bulls’ other free agent additions, including Lonzo Ball, DeMar DeRozan, and Alex Caruso, Bradley will provide the club with some depth at center behind starter Nikola Vucevic.

The Thunder are not expected to extend a qualifying offer to 23-year-old center Tony Bradley, thereby making him an unrestricted free agent, tweets Tony Jones of The Athletic.

The 6’10” center was drafted by the Jazz with the 28th pick in 2017, following his NCAA title with the UNC Tar Heels. He spent three years with Utah before being traded to the Pistons on the night of the 2020 draft and subsequently rerouted to the Sixers.

Bradley averaged 8.7 PPG and 6.1 RPG in 18 minutes per night for the Thunder in 22 games this season, proving himself a capable backup center. However, it doesn’t appear he’s part of Oklahoma City’s plans going forward.

Jones writes that Bradley is expected to have multiple suitors in unrestricted free agency.

7:15pm: The trade is now official, according to press releases from the Sixers and Knicks. The deal breaks down as follows:

The Knicks’ acquisitions of the Heat’s protected 2024 second-rounder and Preldzic’s rights weren’t reported earlier, but neither is a difference-making asset, as the pick will only be conveyed if it falls between 56-60 and Preldzic is unlikely to ever play in the NBA.

New York will waive Poirier now that the deal is official, as we relayed earlier.

11:52am: The Sixers, Thunder, and Knicks are finalizing a trade that will see George Hill land in Philadelphia, according to reports from Shams Charania of The Athletic and Adrian Wojnarowski of ESPN (all Twitter links).

The Thunder are receiving Tony Bradley and Austin Rivers, according to Wojnarowski, who says Philadelphia will send Terrance Ferguson to New York and will acquire Ignas Brazdeikis from the Knicks (Twitter link). Vincent Poirier will join Ferguson in heading from Philadelphia to New York, tweets Kyle Neubeck of PhillyVoice.

While the 76ers were viewed as one of the top suitors for Kyle Lowry, it appears they’ve opted to go in a different – and less costly – direction, addressing the point guard position by acquiring Hill, a steady veteran who has a ton of postseason experience.

The 34-year-old Hill averaged 11.8 PPG and 3.1 APG with a .508/.386/.840 shooting line in 14 games (26.4 MPG) for the Thunder before he was sidelined by a thumb injury. It’s not clear how much more time he’ll miss, but a report this week indicated he’s out of his cast and is working toward a return. Presumably, Philadelphia is confident about his ability to contribute down the stretch.

Hill’s $10MM salary for the 2021/22 season only has a small ($1.28MM) partial guarantee, so the Sixers will have some flexibility during the offseason as they consider whether or not to hang onto him.

As for the Thunder and Knicks, the two rebuilding clubs will add to their ever-growing collections of draft picks in this deal. Ferguson and Poirier probably aren’t in New York’s plans, but the two players headed to Oklahoma City are a little more intriguing.

Bradley, who is eligible for restricted free agency, had 18 points and 11 rebounds in his final game as a Sixer on Tuesday, while Rivers has been a rotation player for playoff clubs in the past and is on a team-friendly contract, with non-guaranteed cap hits of $3.33MM in 2021/22 and $3.15MM in ’22/23.