Trevor Keels, the 42nd pick of last month’s draft, has signed a two-way contract with the Knicks, the team announced (via Twitter).

The news was anticipated, as Ian Begley of SNY.tv reported last month that Keels was likely to receive a two-way contract once Jericho Sims was promoted to a standard deal, which occurred yesterday. New York’s two-way slots are now full, with Feron Hunt occupying the other.

At 6’4″ and 221 pounds, Keels is a combo guard, with some scouts questioning his conditioning, which may have impacted his draft status. He was considered a fringe first-round pick but ultimately fell to the middle of the second round.

Another knock against Keels was his efficiency, as he posted a .419/.312/.670 shooting line with the Blue Devils. That has carried over to Summer League action thus far, with Keels shooting just 3-18 through a couple of games.

However, Keels is young, physically strong, and considered a versatile player on both ends of the court, with a knack for making good decisions. He was also a highly-touted prospect entering college and was the third-leading scorer on a stacked Duke team that reached the Final Four of the NCAA tournament.

If Keels remains on a two-way deal for all of 2022/23, he’ll earn about $509K, be limited to 50 games in the regular season and ineligible for the postseason. He will need to be promoted to a standard contract at some in order to be playoff-eligible.

The Knicks are expected to add Jalen Brunson via cap space rather than trying to work out a sign-and-trade deal with the Mavericks, tweets Fred Katz of The Athletic. Brunson agreed to a four-year, $104MM contract with New York shortly after the start of free agency on June 30. But the signing hasn’t been made official yet as the Knicks review their options on the best way to add him to the roster.

Marc Stein confirms that a signing using cap room is the most likely option (Twitter link), and a source tells him that Monday is probably the soonest it will happen.

Brunson played an important role in helping Dallas reach the Western Conference finals, but Mavericks owner Mark Cuban tells Steve Popper of Newsday there are “no hard feelings” about his departure. Cuban said he never got a chance to make a final offer, but acknowledged that it may not have mattered given Brunson’s close ties to the Knicks organization.

JULY 9, 9:03pm: The new deal with Sims is official, the Knicks announced (via Twitter).

JULY 7, 11:58am: Sims’ new three-year deal will be worth a little under $6MM, according to Katz (Twitter link). A three-year minimum contract would be worth $5.66MM, so if it’s above the minimum, it’s not by much. 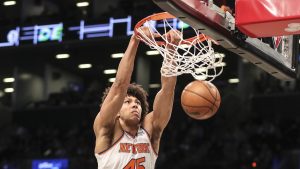 Half the contract is currently guaranteed, Katz adds. There are trigger dates in 2023 and 2024 that would make years two and three fully guaranteed.

JULY 7, 11:39am: The Knicks will promote big man Jericho Sims to their standard roster, having agreed to terms with him on a new three-year contract, according to Shams Charania of The Athletic (Twitter link). Sims spent the 2021/22 season on a two-way deal.

The 58th overall pick in the 2021 draft, Sims played in 41 Knicks games as a rookie, averaging 2.2 PPG and 4.1 RPG in 13.5 minutes per contest. He moved into the team’s starting lineup for five games down the stretch, registering his first career double-double (10 points, 13 rebounds) during the last week of the season vs. Brooklyn.

While the Knicks are trading away Nerlens Noel, the team fortified its frontcourt by re-signing Mitchell Robinson and agreeing to a deal with Isaiah Hartenstein. Sims will provide additional depth up front.

Ian Begley of SNY.tv reported last month that the Knicks would likely negotiate a standard contract with Sims, clearing a path for second-rounder Trevor Keels to take the newly opened two-way slot. Fred Katz of The Athletic confirms (via Twitter) that Keels remains on track to get a two-way deal.

The exact terms of Sims’ new deal aren’t known, but it will likely be a minimum-salary contract or something close to it. The third year will be a team option, per Steve Popper of Newsday (Twitter link).

As Katz tweets, the Knicks will complete the signing using either some leftover cap room or part of their mid-level exception, depending on whether or not they end up turning their deal with Jalen Brunson into a sign-and-trade.

With free agency still two days away, rumors about P.J. Tucker landing in Philadelphia continue to percolate. After Marc Stein reported earlier in the week that multiple executives believe the Sixers will sign Tucker to a three-year, $30MM contract, Keith Pompey of The Philadelphia Inquirer conveys a similar sentiment today.

According to Pompey, three sources believe Tucker to the 76ers is a “done deal,” while a fourth source said he’d be shocked if the veteran forward doesn’t end up in Philadelphia. Sources tell Pompey that Tucker’s three-year deal with the Sixers, assuming it materializes, could be worth $27MM with incentives that increase the value to $30MM.

The Sixers still need to do some cap work in order to realistically make that kind of offer to Tucker. If James Harden turns down his $47MM+ player option and agrees to a lesser first-year salary on a new contract, the team could create the cap flexibility necessary to use its full mid-level exception on Tucker. But Harden is expected to opt in and then sign an extension, which means Philadelphia would have to shed some salary. Furkan Korkmaz ($5MM), Matisse Thybulle ($4.4MM), and Georges Niang ($3.5MM) are among the club’s potential trade candidates.

T.J. Warren has only appeared in four games over the past two seasons but he could still bring value to the Pacers, even if he’s not on the team next season, according to Kevin O’Connor of The Ringer. Warren will be an unrestricted free agent this summer but Indiana could sign-and-trade him to a team coveting his services. Warren has averaged 15.5 PPG in his career.

Kenny Atkinson could become the Hornets‘ next head coach by the end of the upcoming week, a source tells Roderick Boone of The Charlotte Observer, though he cautions that the team still hasn’t reached a final decision. A report on Friday identified Atkinson as the frontrunner for the job, and Boone indicates that momentum for him has been building since last month’s draft combine.

Atkinson has been tied up with his duties as an assistant coach for the Warriors, but with three days between Games 2 and 3 of the NBA Finals, he should have time for a face-to-face meeting with team owner Michael Jordan. Boone notes that an in-person session with Jordan was the last step before James Borrego was hired four years ago.

The Hornets are intrigued by Atkinson’s experience, history of developing young players and emphasis on defense, Boone adds. The Finals could last through June 19, which would limit Atkinson’s input into preparations for the June 23 draft. According to Boone, Borrego’s former assistants are working behind the scenes and are waiting to see if they will be part of the new coach’s staff.

The Magic hold the No. 1 pick and Iowa’s Keegan Murray isn’t expected to go higher than No. 4 in the lottery. That didn’t prevent Orlando from doing its due diligence on the high-scoring wing. Murray came in for a pre-draft workout on Thursday, Khobi Price of the Orlando Sentinel tweets. The two sides also had a discussion during the draft combine in Chicago, Price adds.

We have more developments from the Southeast Division:

Duke freshman Trevor Keels has decided to remain in the 2022 NBA draft, a source told ESPN’s Jonathan Givony (Twitter link). Keels is currently No. 27 on ESPN’s big board, so he has a chance to be a first-round pick.

Keels, who worked out for the Hornets earlier today (Twitter link), was torn on whether or not to return to Duke for his sophomore season, reports Jeff Goodman of Stadium (via Twitter). Keels’ indecision makes a lot of sense, because as a potential late first-round pick, there’s a real chance he could fall to the second round and not receive any guaranteed money, so he must be reasonably confident about being selected in the top 30.

Mike Schmitz of ESPN describes Keels as a “skilled two-way combo guard with a strong foundational skill set” and praises his toughness on defense as well. However, Schmitz adds that there are questions about his motor and notes that he had a lot of ups and downs during his lone college season.

Remarkably, there’s a chance that five of Duke’s top six rotation players could be first-rounders in ’22, as Paolo Banchero, AJ Griffin, and Mark Williams are all projected lottery picks, while Keels is 27th and Wendell Moore is 36th.

The Magic, owners of the top pick as well as the Nos. 32 and 35 selections in the 2022 draft, interviewed a variety of players at the pre-draft combine, have hosted several prospects for pre-draft workouts, and are expected to host several others as they do their due diligence with an eye towards the future.

The NBA has revealed its list of 76 players who have been invited – and who are expected to attend – next week’s draft combine in Chicago. The combine workouts will take place from May 18-20.

Over the course of the week, players will conduct interviews with NBA teams, participate in five-on-five games, and go through shooting, strength and agility drills.

While several of the prominent names at the top of the draft likely won’t participate in scrimmages, those top prospects are still expected to attend. That group includes Chet Holmgren, Jabari Smith, Paolo Banchero, and Jaden Ivey.

A handful of standout players from the G League Elite Camp could be invited to participate in the combine as well.

Here’s the full list of 76 names announced by the NBA today, in alphabetical order, per Shams Charania of The Athletic (Twitter link):