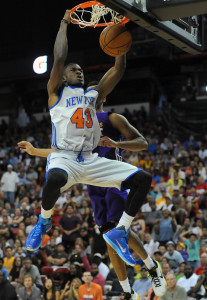 WEDNESDAY, 2:58pm: The Knicks and 2014 No. 51 pick Thanasis Antetokounmpo are putting the finishing touches on what will be a two-season deal with partial guarantees, a source tells David Pick of Eurobasket.com (Twitter link). Marc Berman of the New York Post reported last week that the Knicks were expected to sign the draft-and-stash prospect before training camp. It appears he’ll see the minimum salary, since the Knicks look like they’re using their $2.814MM room exception on Kevin Seraphin.

The addition of Antetokounmpo will give the Knicks a roster count of 17 players, including 13 players with fully guaranteed pacts. The forward will have his work cut out for him in his attempt to make the opening night roster with New York’s current depth at the three spot.