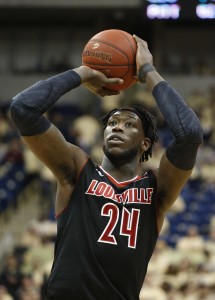 Jason Terry helped the Rockets make a key step toward completing their roster for the season ahead, agreeing this week to return on what appears to be a one-year, minimum salary deal. That leaves Houston with wiggle room to sign No. 32 overall pick Montrezl Harrell, but the Rockets still face a dilemma as they attempt to do so. Signing Harrell, a Rich Paul client, would almost certainly impose a hard cap on the team, and Harrell’s contract would leave the Rockets so close to that cap that they’d have almost no room to maneuver the rest of the season, barring some kind of other move to clear salary.

The collective bargaining agreement calls for a hard cap of $4MM above the tax threshold on teams that use the $5.464MM non-taxpayer’s mid-level exception instead of the $3.376MM taxpayer’s mid-level. The Rockets have already re-signed K.J. McDaniels for nearly $3.19MM. That’s close enough to $3.376MM that any use of the mid-level for a full-season salary for Harrell would push the Rockets above that figure and trigger the hard cap.

Houston couldn’t have paid McDaniels nearly as much had they not used the mid-level, because they didn’t have cap space and because their Non-Bird rights with McDaniels would provide no more than about $1.014MM, which is 20% greater than the minimum. They were hemmed in with McDaniels because he took his one-year required tender from the Sixers last year, the very sort of scenario Houston is seemingly trying to avoid with Harrell.

High second-round picks almost always end up with more than the minimum salary. That’s the case with each of the five second-round picks from No. 31 through 39 who have signed with their NBA teams so far this summer. Thus, the Rockets probably wouldn’t be able to convince Harrell and Paul to take a deal via the minimum-salary exception, unless it’s his required tender. That tender functions like a miniature version of a qualifying offer. Teams have to submit required tenders to their second-round picks no later than September 5th, or they lose the draft rights to them and they become free agents. The tender is for a one-year, non-guaranteed contract at the minimum salary. Some second-rounders wouldn’t sign the tender out of fear that their teams would cut them in training camp, leaving them with no salary for the season ahead. That’s assuredly not the case for Harrell, who was just two picks shy of becoming a first-rounder and who had been a lottery prospect at times during his college career at Louisville.

Harrell could seek a lucrative deal overseas, but if he signs his required tender, he’d become an NBA free agent next summer. That proved a lucrative path for McDaniels, last year’s No. 32 overall pick, who took his required tender from the Sixers a few months before they traded him to the Rockets. No second-round pick from last year will make a salary this season that comes close to the nearly $3.19MM that McDaniels will see.

Harrell’s association with Paul adds another wrinkle. Paul recently declared that Tristan Thompson, another of his clients, wouldn’t re-sign with the Cavs next year if he took his qualifying offer this summer. The Rockets would have the right to match offers for Harrell next year if he signs his required tender this year, a privilege the Cavs wouldn’t have with Thompson if he takes his qualifying offer, but Houston wouldn’t have Harrell’s Bird rights. The Rockets would probably have to use cap space or their mid-level to keep him, just as with McDaniels. The Gilbert Arenas provision would be around to protect the Rockets from having to commit more than the non-taxpayer’s mid-level, but the Rockets would surely prefer to avoid a bidding war for a player with whom they currently have exclusive NBA negotiating rights.

Averting that scenario may prove just as thorny for GM Daryl Morey and company, however. Any deal that Houston gives Harrell this season that’s worth more than the minimum salary or runs for more than two years would result in a hard cap. The Rockets have a payroll of $85,233,113, according to Eric Pincus of Basketball Insiders, not counting the minimum salaries for Terry and Chuck Hayes, whom the Rockets have also agreed to sign. Both Terry and Hayes reportedly have one-year deals for the minimum salary. Since their pacts only cover one year, the Rockets would have to pay them no more than $947,276, the two-year veteran’s minimum. The Hayes deal apparently carries only a partial guarantee, though it’s unclear just how much guaranteed money is involved. Assuming Terry’s deal is fully guaranteed, and assuming Harrell would take a first-year salary equivalent to the $1,170,960 that No. 33 overall pick Jordan Mickey will make this season, according to Pincus, Houston’s payroll would be $87,351,349 absent of Hayes. The hard cap would be $88.74MM, so depending on the amount of the partial guarantee for Hayes, the Rockets would only have about $1MM to play with the rest of the season.

That would handicap the team if it wants to make a trade, since the Rockets wouldn’t be able to do a deal that brings their salary above the hard cap. Houston would have to be especially choosy with midseason signees, since their salaries couldn’t add up to more than the $1MM or so that the team would have left to spend. Claiming an intriguing player off waivers would be nearly impossible. Houston could create more flexibility with a salary-clearing trade, but the Rockets, who are title contenders, must be careful not to trim too much talent from the roster, especially after injuries left the team thin at critical times last season. Waiving a player via the stretch provision before September 1st would represent another path to increased flexibility beneath the hard cap, but that, too, would reduce talent, since no obvious waiver candidate exists.

The constraints of that hard cap nonetheless seem more palatable than allowing Harrell to hit the open market next year. The Rockets could match competing bids for him, since he’d be eligible for restricted free agency, but they wouldn’t truly hold sway over his price point. A hard cap would provide Morey with a measure of control, since he’d have several months to find a trade that reduced salary without draining talent. That’s a difficult task, but Morey has proven among the most canny and creative dealers in his eight-plus years in charge of Houston’s front office. No one stands a better chance of wriggling free from the chains of the hard cap than he does.

Regardless, we’ll soon find out just which less-than-appealing option the Rockets choose. For now, we know simply that the Harrell dilemma proves that negotiations between teams and their second-round picks are infinitely more fascinating than the straightforward rookie scale signings of their more celebrated first-round counterparts.

What do you think the Rockets should do with Harrell? Leave a comment to tell us.