SEPTEMBER 2ND, 6:00pm: The deal is official, the Cavaliers announced.

8:56pm: The deal is for two years and includes a player option for 2016/17, and Smith will earn approximately $5MM this season, Chris Haynes of The Northeast Ohio Media Group tweets. 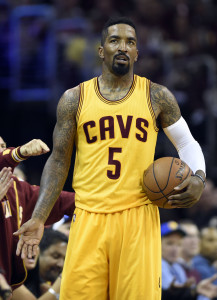 AUGUST 20TH, 8:36pm: It appears that unrestricted free agent J.R. Smith is set to re-sign with the Cavaliers, with the player taking to his personal Instagram account to relay the news. It is unclear what the length and terms of Smith’s deal with the team are. The Cavs reportedly wanted Smith back on a modest one-year deal, as Terry Pluto of the Plain Dealer wrote last month, and Smith had been seeking a three-year deal, according to Chris Haynes of the Northeast Ohio Media Group.

Smith wrote, “Happy to say that I am returning to the Cavs! It’s been a long ride this summer but I can say for sure, well worth the wait. When I opted out of my contract, I wanted to understand the landscape of the NBA and where I fit best. The Cavaliers had things they needed to do in order to piece together a championship caliber roster. I ended up deciding that instead of potentially securing a larger deal elsewhere, I wanted to rejoin an incredible organization in pursuit of the ultimate goal, an NBA championship. Thank you to the Cavaliers for making this happen. Can’t wait to get started!

The Cavs are about $4MM above the tax threshold for now, but they still haven’t re-signed Tristan Thompson, a move that they still appear likely to make. A deal around the max for Thompson would mean Smith’s contract would cost the Cavs $3.75 or more in tax penalties for every dollar it’s worth. Smith had declined his one-year, $6.4MM player option for the upcoming season.