Tobias Harris failed to come to a rookie scale extension agreement with the Magic last fall. That turned into a windfall for Harris. Heading into restricted free agency, he wound up as Orlando’s third-leading scorer and second-leading rebounder last season. 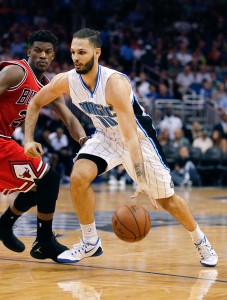 His strong season made him one of the most attractive small forwards on the market this summer. The Magic locked him up with a four-year, $64MM contract.

Could a similar scenario play out between Evan Fournier and the Magic this season? Fournier has shown plenty of promise in his first three seasons and his playing time has steadily increased. Athletic wing players with a reliable 3-point shot are in high demand and Fournier fits the mold. As a backup, Fournier will not approach Harris’ contract figures but he’s undoubtedly worthy of a significant pay jump from the $2,288,205 he’ll make this season.

Steve Kyler of Basketball insiders recently reported that sources close to the negotiations believe that an extension agreement between the parties could be reached before the end of training camp. The dilemma for Fournier is whether he should agree to a multi-year deal now or take the same path as Harris — increasing his value with a productive season and then cashing in next summer.

As Kyler points out, Fournier might also want to see where he fits in the Magic’s future. He’s stuck behind Victor Oladipo at shooting guard and there’s limited time available at small forward with Harris and lottery pick Mario Hezonja at that spot.

The Nuggets selected Fournier with No. 20 overall pick in the 2012 draft and he made good use of his limited playing time in his first season. He appeared in 38 games and averaged 5.3 points in 11.3 minutes, shooting 49.3% from the field and 40.7% on 3-point attempts.

His role in Denver expanded during his second season and his shooting percentage, predictably, took a hit from the lofty averages he posted as a rookie. He appeared in twice as many games, averaging 8.3 points in 19.8 minutes while shooting 41.9% overall and a still-healthy 37.6% from long range.

The Nuggets decided to bring in a more experienced shooting guard prior to last season, dealing Fournier along with Roy Devyn Marble to the Magic in exchange for Arron Afflalo. The Magic exercised their fourth-year team option on Fournier last October, extending his contract through this season.

Advanced stats put the Bouna Ndiaye client in the middle of the pack among his peers. He ranked 35th out of 91 shooting guards in ESPN’s Real Plus/Minus rankings last season. His PER of 12.47 was below the league standard of 15.0 but an improvement over the 10.36 rating during his second season.

There remains a significant hole in Fournier’s offensive game. He needs to improve from the 3-16 feet area. Last season, he shot just 25% from 3-10 feet and 21.7% from 10-16 feet. He could also find his teammates more often. His assist percentage was a modest 11.5.

Defensively, he needs even more work. Perhaps new coach Scott Skiles can draw that out of him. Fournier has the quickness and length to be an above-average defender. A coach who emphasizes defense as a prerequisite to playing time may be just what Fournier needs to become a better two-way player.

If Fournier improves on that end of the floor, his overall value will invariably shoot upward. Will Fournier take a chance that he’ll stay on Skiles’ good side and keep his rotation spot? Or will he take the Magic’s best offer before the November 2nd deadline and give himself peace of mind heading into the season? For a young player without a starting role, that’s not an easy decision.