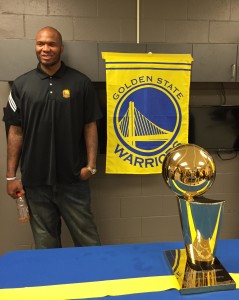 Marreese Speights chats with friends and family as the Larry O’Brien Trophy sits on display at a reception today in St. Petersburg, Florida. CHUCK MYRON/Hoops Rumors

The Larry O’Brien Trophy glistened in front of Marreese Speights this afternoon as about two dozen family, friends and well-wishers clutched paper plates of food in one hand and cell phone cameras in the other while they crammed into a tiny room at the Childs Park Recreation Center in his native St. Petersburg, Florida. The crowded but low-key hometown celebration, the latest stop for the trophy as the Warriors take it on tour around the country, served as a coda to a short but proud offseason for Speights and the Warriors, who start training camp a week from Tuesday.

Three months and three days have passed since the Warriors finished off the Cavaliers for the franchise’s first NBA title in 40 years, and soon begins Golden State’s attempt to win a second in a row. It’s an accomplishment that’s happened so often during the lifetime of the 28-year-old Speights, a period in which 10 NBA champions were the same team that had won the year before, that it almost seems like a rite of passage for the truly elite. Speights doesn’t quite see it that way.

“No, we’re already in a different class, so repeating would just be a bonus,” he told Hoops Rumors, “but hopefully we get another one.”

The 6’10” center/forward nonetheless made it clear as he spoke during today’s event that the team is hungry to add to its trophy collection, and this season, Speights has extra motivation. The three-year, $11MM contract that he signed with the Warriors in 2013 expires at season’s end, and he’s set to hit free agency just as the salary cap is projected to catapult from its present $70MM to $89MM. The Andy Miller client nonetheless insists that he won’t change the way he plays just because it’s a contract year, and that he isn’t focused on the strength of next summer’s market for him.

“I really don’t worry about things I can’t control,” Speights said. “As long as I come into camp, as long as I start the season off good, everything will be all right. So, I’m just focused on the things I can control.”

The Warriors have so far paid to keep their talented team together. They gave Draymond Green a new five-year, $82MM deal in restricted free agency this summer, and rewarded Leandro Barbosa with a one-year, $2.5MM deal after he spent last season making the minimum. They also cast luxury tax concerns aside to pick up their $3.185MM team option on Speights, who made the most of his 15.9 minutes per game this past season. He averaged 10.4 points and 4.3 rebounds per contest, numbers that extrapolate to 23.6 points and 9.7 boards per 36 minutes.

Speights applauded the front office’s efforts to maintain continuity and chemistry, and he also has a positive impression of the team’s most prominent newcomer. Jason Thompson arrives after a series of July trades in which the Warriors shipped out David Lee for Gerald Wallace and flipped Wallace for Thompson, while Thompson went from the Kings to the Sixers and finally to the champs.

“He’s a good player. He’s been in the league. He’s going on his eighth year. He played with Sacramento. He’s going to come to our team and bring us something we need, or something that somebody else can’t bring,” Speights said of Thompson. “So, hopefully he comes in and contributes and that’ll be the role with him.”

Coach Steve Kerr envisions Thompson fitting in somewhere amid a frontcourt that boasts Green, Andrew Bogut, Festus Ezeli and James Michael McAdoo in addition to Thompson and Speights. The role that Lee played last season is “up for grabs,” as Kerr recently told Tim Kawakami of the Bay Area News Group. Thus, Speights, whose minutes in the playoffs this spring were curtailed by a right calf strain, would appear to have a chance to inherit some more playing time. Still, just as with his looming free agency, he won’t focus on decisions that rest in the hands of others.

“Like I said, I don’t know. I just got to worry about things I can control,” Speights said. “I don’t know what my role’s going to be. I’m just going to go into training camp and be the best player I can be, and hopefully, I have a role. So, I’m looking forward to training camp.”

The 16th overall pick from the 2008 draft is a veteran of seven NBA seasons, but he nonetheless made it clear that he’s eager to learn more and improve himself. Not long from now, he’ll learn what it’s like to defend a title, and soon after that, just how much championship experience is worth at the bargaining table.