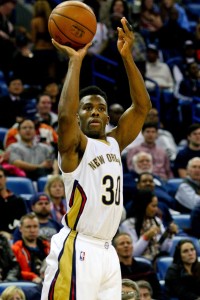 THURSDAY, 3:00pm: The signing is official, the Pelicans announced.

WEDNESDAY, 11:22am: Restricted free agent Norris Cole has accepted his qualifying offer from the Pelicans, a source tells Brian Windhorst of ESPN.com (Twitter link). Agent Rich Paul confirmed to Marc J. Spears of Yahoo! Sports that he’s signed the tender, worth $3,036,927, though the team has made no official announcement (Twitter link). The qualifying offer, which covers one season, sets Cole up for unrestricted free agency next summer, and it also gives him the right to veto trades this season.

The point guard’s free agency had been slow-going, as is common among Paul’s clients. However, the start of camp is less than two weeks away, and fellow Paul client Montrezl Harrell reached an agreement in principle Tuesday with the Rockets. Cavs restricted free agent Tristan Thompson, Paul’s most prominent unsigned client, remains in limbo.

Cole, once he officially signs the qualifying offer, will become the just 20th player to do so since 1995, joining Matthew Dellavedova, who signed his qualifying offer from the Cavaliers in July. Still, it’s no shock that Cole is doing so, as a source told Michael Scotto of SheridanHoops in late July that the 26-year-old saw the qualifying offer as a viable option. Grantland’s Zach Lowe suggests both sides have reason to be comfortable with it (Twitter link). Cole, a backup, will play this season on a salary that’s almost as much as the value of the taxpayer’s mid-level exception and hit the open market next summer, just as the salary cap is set to spike and teams will have money to burn. The Pelicans keep costs in check and preserve about $5MM worth of room beneath the luxury tax line.

The Sixers, Knicks and Lakers all reportedly had interest this summer in the former 28th overall pick, but New Orleans kept up its pursuit and had the right to match offers. New coach Alvin Gentry recently expressed a desire to have Cole re-sign, and Anthony Davis was also hopeful that Cole would be back. Dana Gauruder of Hoops Rumors examined Cole’s free agency in depth last month, concluding that he would do well to sign the qualifying offer.

Cole is becomes the 17th Pelican to have either a signed contract or a verbal agreement with the team, and his addition will give New Orleans 14 fully guaranteed deals. It’ll bump the Pelicans team salary to about $79.652MM, well beneath the $84.74MM tax threshold and their $88.74MM hard cap.

Who do you think benefits the most from a signed qualifying offer, Cole or the Pelicans? Leave a comment to share your thoughts.