The New Orleans Pelicans have been one of the busiest teams this offseason, with their focus on retaining their core group of players. They made national headlines at the start of free agency when franchise player Anthony Davis agreed to a long-term extension. They filled out their roster mostly by re-signing their own free agents. They agreed to terms with Omer Asik, Alexis Ajinca, Luke Babbitt and Dante Cunningham on multi-year deals and brought in a couple of low-profile free agents — Kendrick Perkins and Alonzo Gee. 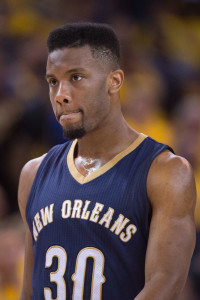 There’s one order of business that remains unresolved. Norris Cole is still contemplating his options, leaving the Pelicans’ backcourt in a state of flux. The Pelicans tendered a qualifying offer of $3,036,927 to Cole, making him a restricted free agent.

With injury-prone Jrue Holiday as the starter, Cole would seemingly have a rotation spot if he re-signed with New Orleans, since the only other point guard possibilities on the current roster are wing starters Eric Gordon and Tyreke Evans. The Pelicans’ backcourt was thinned out even further when they opted to waive Toney Douglas.

Early in the free agency process, Cole was reportedly the team’s top remaining priority. Yet the situation has dragged on deep into the summer with no resolution. They haven’t been able to come to terms on a multi-year contract, nor has Cole received an offer sheet from another club. He could accept the qualifying offer and become an unrestricted free agent next summer, when the salary cap shoots upward, but the Rich Paul client has held off on that option.

There have been reports of other teams making a run at Cole. The Sixers showed some interest and certainly have the cap room to make him an offer, though they currently have four point guards on their roster. Cole could compete for a starting role there but if Philadelphia had serious interest in him, it would seem that an offer sheet would have already been made.

The Knicks have also been linked to Cole. Their point guard trio of Jose Calderon, Langston Galloway (who can play either guard spot) and rookie Jerian Grant doesn’t get the pulse racing, and Cole could compete for a starting job there. However, the Knicks have been so active in the free agent market that they’re limited to offering a minimum salary to Cole if they can’t engineer a sign-and-trade.

The Lakers are a possibility, though the signing of Lou Williams to back up rookie D’Angelo Russell makes that an unlikely scenario.

The relatively quiet market for Cole is somewhat surprising, considering that the Wizards, Thunder, Bucks and Cavs were reportedly interested in Cole leading up to the February trade deadline. Cole wound up with the Pelicans when the Heat included him in the three-team Goran Dragic trade.

For what it’s worth, Cole made a favorable impression on the team’s most important player. Davis has said that he wants Cole back and the fact that the Pelicans allowed the deadline to withdraw the qualifying offer to pass means they’re serious about retaining Cole, as long as it fits their budget.

In the meantime, New Orleans is exploring other options. The club has reportedly made an offer to veteran Jason Terry, though there hasn’t been any movement on that front over the past week.

Cole still has the leverage of signing the qualifying offer but the longer he waits, the more competition he may face for a rotation spot. So unless there is another suitor ready to extend an offer sheet, it may be in his best interest to come to terms quickly with the Pelicans. He should get enough playing time to enhance his value if he accepts the qualifying offer. He can then get the long-term security he desires — with a major bump in salary — next summer.