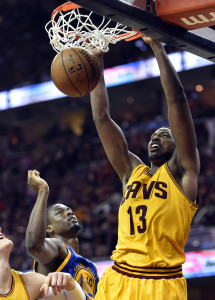 2:02pm: The deal is official, the Cavs announced.

THURSDAY, 1:41pm: Thompson has put pen to paper on his contract, Haynes tweets. The Cavs have yet to acknowledge the signing publicly.

This news comes as a bit of a surprise, seeing how the two sides reportedly haven’t been in contact with each other since Thompson let the Cavaliers’ qualifying offer expire at the beginning of October. Cleveland held the upper hand in these negotiations since Thompson’s choices were limited to signing a long term deal with the Cavs, signing an offer sheet with another team, or continuing to sit out. March 1st would have been the last day for him to sign an offer sheet this season, if the drama dragged on that long, and if he held out all season, Cleveland would have had the chance to issue another qualifying offer to renew his restricted free agency next July.

It had appeared on the opening day of free agency that the sides were close on a five-year, $80MM deal, but the power forward instead had reportedly sought the max of around $94MM over five years, though Thompson was later said to prefer a three-year max contract, something that Cleveland had little interest in agreeing to. The full value of a three-year max for Thompson would have been worth precisely $52,914,188. Tim Bontemps of The New York Post had predicted that Thompson would end up re-signing for five years and $85MM, a number not far off the amount reported by Haynes.

The 24-year-old will become the sixth highest paid power forward in the league behind Kevin Love, LaMarcus Aldridge, Blake Griffin, Paul Millsap, and David Lee. It’s debatable whether or not Thompson is worth being compensated at this level, especially given the luxury tax hit that will be tacked on. Thompson’s numbers through 306 career NBA contests are 10.1 points, 8.4 rebounds, and 0.7 blocks to accompany a slash line of .488/.000/.633.

The Cavaliers currently possess a roster count of 20 players, including 13 with fully guaranteed contracts, which is the preseason maximum, so a corresponding move will need to be made prior to Thompson’s deal becoming official.