The question regarding veteran big man Chris Andersen is not whether the Heat believe he has anything left in the tank. It’s whether any other team feels that way, or is at least willing to take on his salary to acquire another rotation player off the Heat roster. 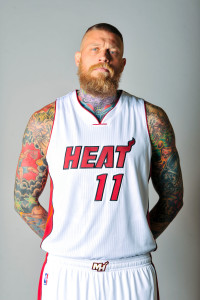 Miami tried to dump salary during the offseason in order to keep its core group intact. The Heat would like to make the 37-year-old Andersen part of that purge in order to improve their bottom line. They are over the luxury tax threshold and a repeat taxpayer. They have $91.1MM in salary guarantees for the upcoming season, including the remaining $5MM on Andersen’s contract.

They were able to move shooting guard Zoran Dragic to the Celtics and point guard Shabazz Napier to the Magic in July to gain some relief, though they had to throw in some cash in both deals to sweeten the pot. The Heat have actively shopped Andersen and point guard Mario Chalmers — who is owed $4.3MM in the final year of his deal — according to Grantland’s Zach Lowe. Miami is basically willing to give both of them away, according to Lowe, but obviously haven’t found any takers. Barry Jackson of the Miami Herald recently reported that there was a soft market for the player nicknamed “Birdman.”

It’s not surprising, given that he’s 37 years old and in the twilight of his career. But according to advanced metrics, Birdman still has value. He had an above-average player efficiency rating of 16.12 last season on ESPN’s Hollinger rankings, when he averaged 5.3 points, 5.0 rebounds and 1.0 blocks in 60 games. In fact, Andersen has posted an above average PER (with 15.0 being the baseline) in seven consecutive seasons.

This is mainly due to Andersen’s defensive prowess, even at his advanced age. He has posted a positive Defensive Box Plus/Minus rating every season of his career, according to BasketballReference.com. He has a career plus 2.8 Defensive Box rating and that was still at 2.3 last season, when the injury-riddled Heat needed him to start 20 games.

That still won’t guarantee him a rotation spot if the Heat fail to trade him during training camp. There’s plenty of competition at the center and power forward spots, especially with the free agent addition of Amar’e Stoudemire, who was signed to a one-year, $1.5MM contract in July. Hassan Whiteside is the starter at center and another veteran, Udonis Haslem, is still on the roster.

Add in starting power forward Chris Bosh, who’s back after his major health scare last season, along with Josh McRoberts and Stoudemire, and there’s not many minutes left for Birdman. Throw in the trend to use smaller lineups, which will often encourage coach Erik Spoelstra to use Bosh or Stoudemire at center, and Andersen’s role shrinks even further.

The good news for Miami is that it has time to move Andersen’s contract. The Heat have until the final day of the regular season to avert paying repeat-offender tax penalties by shedding salary.

Playoff contenders that lose a center or power forward to injury during the course of camp or the season could come calling for Birdman, knowing he can provide a steady veteran presence and solid post defense. For the time being, though, he’s an insurance policy the Heat cannot afford in the long run.