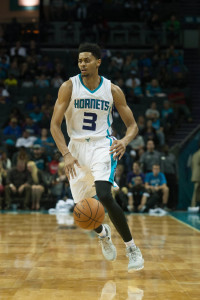 3:02pm: The deal is official, the team announced via press release.

“We were thrilled with the opportunity to add Jeremy Lamb to our roster this past summer,” Hornets GM Rich Cho said. “Through the preseason and start of our regular season, Jeremy has proven to be the type of player and professional we seek here in Charlotte.  We’re excited to have him as a part of the Hornets for years to come.”

MONDAY, 10:30am: The sides have an agreement in principle, tweets Rick Bonnell of the Charlotte Observer.

SUNDAY, 8:39pm: The Hornets and Jeremy Lamb are closing in on a three-year extension for around $21MM, Marc Stein of ESPN.com reports.

Lamb is under contract for 2015/16, the final season on his rookie-scale contract, at a salary of $3,034,356. The 23-year-old shooting guard has long been considered to have high upside because of his athleticism and solid outside shooting ability. At 6’5″ and 185 pounds, Lamb also has good size for his position.

Ken Berger of CBS Sports recently touted Lamb’s potential but added that he needs to develop his drive game and get to the paint in order to take full advantage of his opportunity with the Hornets. Much of that has been said about Lamb ever since the Rockets drafted the former UConn player with the 12th pick of the 2012 draft. Houston then traded him to the Thunder as part of the James Harden deal.

Lamb was acquired by the Hornets from the Thunder in June in exchange for Luke Ridnour and a 2016 second-round pick. In 47 appearances last season he averaged 6.3 points, 2.3 rebounds, and 0.9 assists. Lamb was never able to consistently crack the Thunder’s rotation, and while he displayed range, he was also an inconsistent shooter. Thus, it is a risky move for Charlotte. Still, while $21MM may seem like a lot right now, it’s worth keeping in mind the expected rise in salary cap next year.

The league officially projects that the cap will leap to $89MM for 2016/17, though Sean Deveney of The Sporting News recently heard from many agents and executives around the league who believe it will end up at $95MM. Prior to the Lamb deal, Charlotte had been carrying about $34MM in guaranteed salary for 2016/17. Al Jefferson and Nicolas Batum, the team’s two most highly paid players this season, are on expiring contracts.