6:00pm: Kobe Bryant announced that this will be his final season in a letter published in The Players’ Tribune.

“This season is all I have left to give,” Bryant writes. “My heart can take the pounding. My mind can handle the grind. But my body knows it’s time to say goodbye.” 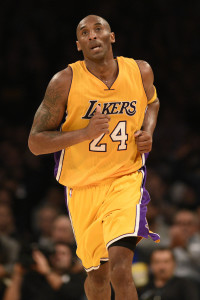 Bryant, 37, is undoubtedly one of the greatest players of all time, but injuries in recent seasons have taken a toll on the superstar’s body, as he alludes to in his letter. Bryant has spent his entire 20-year career with the Lakers. He has won five NBA championships and earned MVP honors in 2008.

The news does not come as a surprise and confirms widespread speculation that this would be his final season. What’s more, according to Lakers GM Mitch Kupchak, Bryant signaled to the organization that this would be the end of his storied career back in the spring. Kupchak then publicly said on multiple occasions that the Lakers expected Bryant to retire.

Bryant, 37, in the final year of a two-year deal that will pay him $25MM this season, entered Sunday’s game against the Pacers averaging 15.7 points per game on a career-worst 31.5% shooting percentage. Bryant remains the NBA’s highest-paid player. Not including endorsements, Bryant earned $303,238,062 in his career, according to Basketball-Reference.com.

Bryant’s field goal percentage and 3-point percentage both rank last in the NBA among qualified players. Despite his struggles, the Lakers have publicly supported Bryant and coach Byron Scott said the future Hall of Famer would not be benched. “I would never, never, never do that,” Scott told the media after practice on Friday. “That’s not an option whatsoever. No, that’s not an option.”

Bryant was drafted out of high school by the Hornets with the 13th overall pick in 1996 but was traded to the Lakers.  He currently is third on the NBA’s all-time scoring list, behind only Kareem Abdul-Jabbar and Karl Malone.

5 thoughts on “Kobe Bryant To Retire After Current Season”