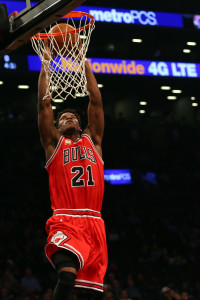 The Bulls ended their 2014/15 campaign with a playoff ouster at the hands of the Cavaliers, making it the fourth straight season that the team failed to advance beyond the second round of the postseason. The organization clearly believed that the team’s shortcomings were more a matter of coaching style than an issue with personnel, and it cut ties with coach Tom Thibodeau after the season, but not before taking some parting shots at the man who guided the franchise to an overall regular season mark of 255-139 during his tenure.

Chicago replaced Thibs with Fred Hoiberg, and the front office’s hope is that Hoiberg can revamp the team’s offense, an area that Thibodeau was heavily criticized for neglecting in favor of defense, as well as for Hoiberg to foster better working relationships between the coaching staff, players and team management. For his part, Hoiberg firmly believes that he can win with the current roster, an unsurprising stance for the new coach.

“I love this roster,” Hoiberg said during his introductory news conference. “I absolutely love this roster. I love the versatility of the players. The different lineups that we’re going to be able to play, [we] can play small, can play big. You’ve got lineups that I really think can get out and play with pace. You’ve got a great group of veteran players that know how to play. I think Tom Thibodeau is an excellent, excellent basketball coach and I think he instilled a lot of unbelievable qualities in this team that hopefully I can build on.”

Outside of shuffling head coaches, the Bulls’ most pressing offseason business revolved around re-signing restricted free agent swingman Jimmy Butler, who gambled as he passed up a proposed extension with Chicago a year ago that would have seen him earn an average annual salary of approximately $11MM. That gamble paid off handsomely for the 26-year-old. The former 30th overall pick apparently would have settled for between $12.5MM and $13MM a year during extension talks, but his performance during the 2014/15 season, which earned him the Most Improved Player of the Year award, sent his value rocketing into the stratosphere.

Butler had reportedly intended to seek short-term offer sheets this past summer, but instead he wound up re-signing with Chicago on a deal that won’t allow him to hit free agency until 2019. That’s not too great a sacrifice considering that when the Bulls tendered him a maximum qualifying offer, that meant Butler would not have been permitted to sign an offer sheet that would let him into free agency sooner than 2018 anyway, and he apparently nixed his scheduled meetings with the Lakers, Sixers and Mavs when Chicago issued its proposal. His only recourse at the time would have been to sign his standard qualifying offer, which would have been worth less than $4.434MM. That would have allowed Butler to hit unrestricted free agency in 2016, but it would have entailed a significant financial sacrifice for this season, as well as a risk that he could suffer a serious injury without the security blanket a long-term pact provides.

Now that the Bulls have secured Butler’s services for the long term, there are concerns regarding what is reportedly a strained relationship with the team’s other star, oft-injured point guard Derrick Rose. While the two have downplayed any possible rift between them, the alleged discord stems from Butler’s dissatisfaction with Rose’s work ethic, an unnamed former member of the Bulls told Joe Cowley of The Chicago Sun-Times. “Personally, the two are great. Professionally is where they have a difference of opinion,” the source said. Cowley’s source also noted that Butler took offense to a comment Rose made during the playoffs last season, when the point guard was asked if Butler had reached superstar status. “I think it’s going to take a little minute for Jimmy to get there,’’ Rose said, according to Cowley. Regardless of Rose’s thoughts on the matter, Butler is now certainly being paid like a superstar, and it will be interesting to see if his hefty payday will affect his play and preparation going forward.

Rose, the former alpha of the team, is apparently looking ahead to his own opportunity to potentially hit the open market, which he is eligible to do after the 2016/17 campaign. The veteran playmaker caused a stir during the team’s media day when he said that he’s already looking toward his next foray into free agency. “You see the way all this money will be passed around in this league. My day is coming,” Rose said. And while Rose did add that he expects to stay in Chicago for the long term, it remains to be seen if both parties will be amenable to a new arrangement when the time comes.

Chicago re-signed two other valuable rotation pieces over the summer in Mike Dunleavy and Aaron Brooks. Brooks, a seven-year veteran, earned himself a slight raise, going from the $1,145,685 minimum salary he made last season to a $2.25MM slice of the taxpayer’s mid-level exception in 2015/16. Chicago can’t trade him without his consent, since he’s on a one-year deal and he’d lose his Early Bird rights if the Bulls did trade him, though that isn’t a major concern since he’s not a likely trade candidate anyway.

Dunleavy’s deal is a bit more problematic, given his age, 35, as well as his injury history, with the swingman appearing in an average of just 60 contests per season over the last seven years. He’s not likely to buck that trend as he enters the back end of his 30s, and an excellent chance exists that Chicago ends up regretting this deal by year two thanks to the luxury tax implications. The team is over the tax threshold by almost precisely the value of Dunleavy’s $4.5MM salary for this season. The Bulls did hedge their bets somewhat on Dunleavy’s deal, only partially guaranteeing the final year, a wise move on their part, all things considered.

The team’s final significant addition was selecting Arkansas power forward Bobby Portis with the No. 22 overall pick in this year’s NBA draft. Portis has the potential to be a steal, with his high motor, versatile game and scoring ability. The only shade I can throw Chicago’s way over its draft choice is that the team is currently overcrowded in the frontcourt, and barring injuries, it will be difficult for the rookie to provide early returns on the team’s investment. With more pressing needs in the backcourt and on the wing, the Bulls may have been better served to go in a different direction, but he was an excellent value pick that late in the first round, so it’s difficult to be too critical of his addition. Hopefully for the Bulls, his development won’t be stunted languishing on the bench, as Portis does have the capability to be a solid player in the league for seasons to come.

This year’s iteration of the Bulls has quite a bit to prove. It will be interesting to see where the blame falls if the team regresses, whether it’s on the new coach and his system, the players — who are the one constant after the dismissal of Thibodeau — or the front office for not recognizing the need for roster change. With approximately $64.75MM in guaranteed salaries already on the books for 2016/17, and a decision to make on center Joakim Noah, who’s set to hit unrestricted free agency next summer, the front office had better hope it was correct in identifying Thibodeau as the issue, because it will be difficult to make significant roster upgrades, even with the expected increase in the salary cap.

One thought on “Offseason In Review: Chicago Bulls”