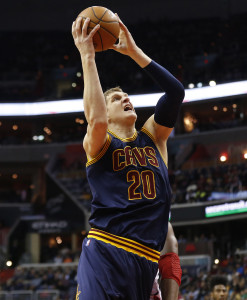 The Cavaliers have started to gauge the market for center Timofey Mozgov, according to Adrian Wojnarowski of Yahoo Sports. Mozgov’s playing time has been cut from 25 minutes per game after coming to Cleveland last season to 17.8 this year. As a result, his scoring has fallen from 10.6 to 6.1 points per game and his rebounding average has dipped from 6.9 to 4.3. He’s earning $4.95MM in the final year of his contract.

Phoenix has tried to put together multi-team trades to get rid of Markieff Morris, who has expressed displeasure with the Suns organization since his brother Marcus was traded to the Pistons during the offseason, Wojnarowski writes. He cites league sources who say Cleveland could act as a facilitator in one of these deals.

Several teams have reportedly contacted the Cavaliers about a possible deal for the 29-year-old Mozgov. Cleveland could save an estimated $15MM to $20MM in tax penalties by moving Mozgov before the February deadline, although the front office had been leaning toward keeping him in hopes that he could start contributing the way he did last season.