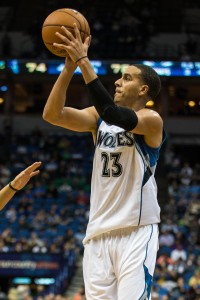 A cursory glance at Kevin Martin suggests he should be a more sought-after commodity than he is. After all, someone who scored 20 points per game the previous season, is under contract for just $7.085MM this season, has no existing injury problems and a solid locker room reputation sounds like quite a catch. Still, the availability of Martin on the trade market, which Jon Krawczynski of The Associated Press reported last month, doesn’t appear to have inspired executives from other teams to make any sort of mad rush for him. The 11th-year veteran’s high scoring last season came in just 39 games, and this year his points per game have dipped to 11.5, his fewest since the 2005/06 season, in large measure because a focus on youth in Minnesota has led interim coach Sam Mitchell to move him in and out of the starting lineup, and at times the rotation entirely.

The Kings are one of the teams that likes Martin, as Darren Wolfson of 1500 ESPN Twin Cities reported shortly after the news emerged that he’s on the block. They’ve called the Wolves about him, as Steve Kyler of Basketball Insiders heard, and the Bulls and Grizzlies have looked into trading for him, too, Kyler added. However, the Grizzlies have resisted attempts from Minnesota for a swap of Martin for Courtney Lee, as USA Today’s Sam Amick detailed. Memphis doesn’t want to bite into its cap flexibility for next season, according to Amick, and that helps explain the team’s lack of a desire to swap Lee, a pending free agent, for Martin, who has a player option worth almost $7.378MM for 2016/17.

No one’s certain just what Martin will do with his option, Amick said, and while many teams will have gobs of cap space this summer, the option is still large enough to pose a problem, especially for teams that would like to be able to make a marquee addition. Martin has proven that he can score and shoot from long distance, but as his stint replacing James Harden in Oklahoma City revealed, he’s no substitute for a star.

The 6’7″ shooting guard was, at his peak, a versatile offensive threat, nailing 41.5% of his 3-pointers and attempting 10.3 free throws per game for the Kings in 2008/09, the season in which he averaged a career-high 24.6 points a night. He stopped getting to the line in 2011/12, when his free-throw rate fell from .528 the year before to .333, perhaps because of new foul-call rules introduced for that season. His free-throw rate hasn’t recovered since, though it’s experienced somewhat of an uptick this season, to .396. That’s perhaps because he’s taking fewer 3-pointers per shot attempt than in any year since he was a rookie.

Martin, who turns 33 on February 1st, has never been a defensive stopper, and the numbers suggest he’s sieve-like this season. He ranks as the 71st-best defensive shooting guard in ESPN’s Real Plus Minus metric, is a minus 3.4 in Basketball-Reference’s Defensive Box Plus Minus stat, and Minnesota’s defense, only the 20th most efficient in the league, is 2.5 points per 100 possessions worse when he’s on the floor compared to when he’s sitting, according to NBA.com.

It’s tough to understand why the Kings, just 27th in defensive efficiency, would have interest in a reunion, particularly since Sacramento would be helping a fellow bottom-half Western Conference team gain assets for the future. The Kings are understandably anxious to end their playoff drought, but Martin would go much better on a team with realistic aspirations of a deep playoff run, like the Bulls or the Grizzlies.

Chicago seems like a particularly strong fit. The Bulls are reportedly looking for an upgrade on the wing and believe they could use more shooting. Martin is a career 38.5% 3-point shooter, and while his accuracy is down slightly, to 37.2%, this season, he canned 40.5% of his shots from behind the arc during the previous three seasons. The question is what the Bulls would give up to get him. Chicago has a surplus of big men, but the Wolves are fairly deep up front too, with Karl-Anthony Towns, Gorgui Dieng and Nemanja Bjelica to go along with Kevin Garnett, who’s still starting. Minnesota signaled a desire to clear cap space, or at least achieve cost certainty, with its reported proposal of Martin for Lee, but the Timberwolves would have little reason to acquire trade candidate Joakim Noah and his expiring contract. The Bulls have an extra first-round pick coming their way courtesy of the Kings, so perhaps they could part with one of their own picks as the centerpiece of a package. However, Chicago would have to come up with at least $5.588MM in salary to add to a deal that swaps Martin for a pick, and that would either entail the potential deal-killers of the Bulls relinquishing a fairly valuable player, the Timberwolves taking back long-term salary, or both.

The Grizzlies would surely benefit from Martin’s shooting, too, though again, it’s tough to see an obvious solution to the question of whom or what they would send out in return. They’re below the tax threshold, but only by about $2MM, so while in theory they could send out as little as $4.657MM in salary straight up for Martin, they’d run over the tax line if they did so, and trade rules are different for tax teams. Outside of Lee and Mike Conley, whom they’re not trading, the expiring deal that might make the most sense for the Grizzlies to swap for Martin belongs to Jeff Green, who’s making $9.45MM this year. A Martin-for-Green deal would allow Memphis to trim salary and cut ties with a player who’s never quite fit in. Green is shooting a dreadful 26.7% from 3-point range this season and is only a 33.9% career 3-point shooter. The Timberwolves could move on from Green at season’s end, just as they could with Lee, or they could try to keep him around if he proves a better match for them than he has for the Grizzlies. Still, it’s unclear if either the Grizzlies or Minnesota has interest in such a trade.

The Thunder, Spurs and Heat are other teams capable of deep playoff runs that have made a below-average number of 3-pointers this season, though it certainly hasn’t hurt San Antonio much to this point. Oklahoma City probably isn’t anxious to relive its one-season experiment with Martin. Miami could help reduce its tax bill with a swap of Luol Deng for Martin, which would work under the salary-matching rules, but the Heat would surely be loath to compromise their 2016/17 cap flexibility in any way, so it’s tough to see them dealing an expiring contract like Deng’s for Martin.

It seems as though the Timberwolves are ready to move on from Martin, but finding a deal that works will likely be difficult. Such is the nature of having a one-dimensional player on the wrong side of 30. Still, Martin remains a credible threat from behind the arc, and 3-point shooting has never been in higher demand, so if the Timberwolves aren’t too picky and show a willingness to take back some salary for 2016/17, they’ll probably find the trade partner necessary for GM Milt Newton to make his first swap in charge of the team’s player personnel.

Where do you think Martin will be playing after the trade deadline? Leave a comment to share your thoughts.