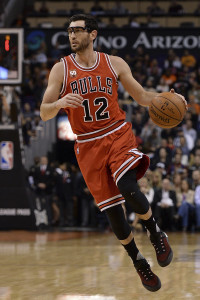 4:16pm: The Bulls traded Kirk Hinrich to the Hawks as part of a three-team swap that also involved the Jazz, all three teams announced. Chicago, in its first trade since July 2014, gets Justin Holiday from the Hawks and Denver’s unprotected 2018 second-round pick from the Jazz, who acquired it from the Nuggets in 2013. Utah receives Shelvin Mack from the Hawks.

Hinrich returns to Atlanta, where he spent a season and a half as part of the two-year hiatus in his Bulls career from 2010-12. The 35-year-old is in his 13th NBA season and his 11th with Chicago. However, he’d never had such a limited role, with his minutes only at 15.9 per game this season, by far a career low. Any playing time he gets in Atlanta figures to come at the wing instead of the point guard spot, since the Hawks held on to Jeff Teague and Dennis Schröder in spite of rumors about both, and Teague in particular.

Atlanta did end up dealing away Mack, its third-string point guard, who, like Hinrich, is playing the fewest minutes he’s ever seen in his career at 7.5 a game. The 25-year-old Mack, a fifth-year veteran, becomes the most experienced point guard for the Jazz, who’ve de-emphasized the position in the wake of the offseason injury to Dante Exum that wiped out his season. Utah’s reported talks about swapping point guards Ty Lawson and Trey Burke fell through. Mack has a non-guaranteed salary of more than $2.433MM for next season.

Holiday, the other player the Hawks gave up, picked up a championship with the Warriors last summer and shortly thereafter signed a two-year fully guaranteed deal for the minimum salary with Atlanta. His minutes are down slightly but his shot attempts and scoring are off markedly from last year’s numbers. The primary benefit for Chicago, aside from the pick, is the financial savings, as the Bulls subtract the $1,907,664 difference between Hinrich’s and Holiday’s salaries from their payroll. That also clears the Bulls of nearly $2.9MM in projected luxury tax penalties. The deal allows Chicago to create a trade exception equivalent to Hinrich’s $2,854,940 salary.

Atlanta gets to create a trade exception worth the equivalent of Holiday’s $947,276 salary, since Mack’s $2,433,333 pay is a close match with Hinrich’s, even though a 15% trade kicker that Chicago is paying Hinrich gives him a slight bump on his salary. The Jazz remain under the cap, using a slice of the roughly $7.6MM in cap room they had entering deadline day to take in Mack’s salary.

Brian Windhorst of ESPN.com broke the news that Hinrich was headed to Atlanta (Twitter link), while Adrian Wojnarowski of The Vertical on Yahoo Sports reported the Jazz were getting Mack and giving up a second-round pick (Twitter link). K.C. Johnson of the Chicago Tribune relayed that Holiday was going to the Bulls and that all the pieces were part of the same three-teamer, rather than separate deals (Twitter link). Chris Vivlamore of the Atlanta Journal-Constitution pegged the second-round pick going to Chicago as Denver’s 2018 second-rounder. RealGM shows that the pick carries no protection.