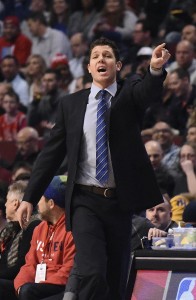 The Lakers have hired Luke Walton to become their next head coach, the team announced. Kevin Ding of Bleacher Report was the first to report the news (Twitter link). The length and terms of the arrangement are unknown at this time. Walton will begin his new duties at the conclusion of the Warriors season.

Los Angeles formally interviewed Walton on Thursday in Oakland and called off other scheduled interviews after their meeting with the Golden State assistant, as Ramona Shelburne of ESPN.com hears (ESPN Now link). Reports indicated the team had planned to interview David Blatt, had mutual interest with Jeff Van Gundy and saw Ettore Messina as an intriguing alternative if they didn’t land Walton. Roy Williams, John Calipari, Jay Wright, Tom Izzo, Jeff Hornacek, Doug Collins and Kevin Ollie were others the Lakers reportedly eyed.

“We’re excited to bring Luke back to Los Angeles, where we feel he’s going to start an outstanding coaching career,” GM Mitch Kupchak said in the team’s statement. “He’s one of the brightest young coaching minds in the game and we feel fortunate that he’ll be leading the on-court future of our team.”

Despite his relative lack of coaching experience, Walton was in high demand around the league among teams with coaching vacancies. The Kings, Rockets and Knicks were all reportedly interested in the Warriors assistant after he posted a 39-4 record as acting head coach in Steve Kerr‘s absence, including a 24-0 start, the best beginning to a campaign in NBA history.

Walton, 36, becomes the 26th head coach in Lakers history. The son of NBA legend Bill Walton, Luke spent 10 years in the NBA as a player, notching averages of 4.7 points, 2.8 rebounds and 2.3 assists in 564 regular season games with the Lakers and Cavaliers. The younger Walton was a member of championship teams with the Lakers in 2009 and 2010. After his playing career, Walton served as a player development coach for the D-League Los Angeles D-Fenders during the 2013/14 season before moving on to the Warriors for 2014/15. He was also an assistant coach at the University of Memphis during the 2011 lockout.