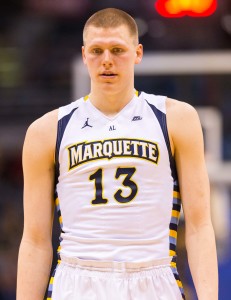 OVERVIEW: Marquette’s Henry Ellenson has been dreaming of this opportunity since he began playing organized basketball at age 2. The NBA draft is the next step for the Golden Eagles’ star power forward, who got an early introduction to the game when he joined his older brothers’ team in Eau Claire, Wisconsin.
“I was pretty much born in a gym and that’s how I’ve been my whole life,” Ellenson told Tom Pipines of Fox 6 News in Milwaukee, “and so I just love the game of basketball, and maybe it’s because of that.”

Seventeen years later, Ellenson can expect to hear his name called early on draft night. He posted 17 double-doubles at Marquette, ranked third in the Big East in scoring at 16.8 points per game and led the conference in rebounding with 9.8 boards per night. He was a first-team all-Big East selection and a finalist for the Wayman Tisdale national freshman of the year award.

STRENGTHS: Ellenson, 19, already has the makings of an NBA body. At 6’10″and 240 pounds, he has a 7’2″ wingspan and 9’1″ standing reach, giving him the size to handle playing center in the pros, according to Jonathan Givony of DraftExpress. Ellenson’s mobility and dexterity are impressive for his size, Givony notes, although he lacks quickness and explosiveness and has to be careful of a weight problem that he developed when he was younger. Ellenson handles the ball extremely well for a big man, with the ability to grab a rebound and lead the break, and he possesses a variety of shot fakes, moves off the dribble and body control that help him create his own shots. ESPN’s Chad Ford praised Ellenson’s athleticism and notes that he complements his inside game with “shooting range out to the 3-point line.” Ellenson averaged nearly one made 3-pointer per game in college, but shot just 29% from long distance. However, his proficiency from the foul line (75%) suggests he can improve as a 3-point shooter.
WEAKNESSES: NBA scouts are concerned about Ellenson’s development on defense, Givony writes, noting that he has trouble guarding quicker opponents on the perimeter and doesn’t have the timing or explosiveness to be an effective rim protector. Givony also cites problems with Ellenson’s “instincts, awareness and intensity level,” adding that he isn’t quick enough to be effective in pick-and-roll defense and often gets caught between the shooter and the roll man. Ford says Ellenson needs to develop his defensive skills and get in better shape to make an impact in the NBA on that side of the floor. Offensively, Ellenson’s abilities don’t always transfer into positive results, as his true shooting percentage of 54% this season reflects. He often has problems with “efficiency and rhythm,” notes Trevor Magnotti of Upside and Motor, who says Ellenson touched the ball on a lot of possessions at Marquette but didn’t make the most of his opportunities. Some scouts believe Ellenson often tries to force things on offense and is prone to making poor decisions with the dribble and pass. There were also concerns about his passing ability and willingness to give up the ball at Marquette.
(For Part Two of our Henry Ellenson Prospect Profile, click here.)
Retweet 4 Share 2 Send via email0
View Comments (0)