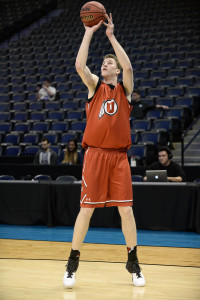 OVERVIEW: Austrian big man Jakob Poeltl was projected as a borderline lottery pick in the 2015 NBA draft, but the center decided to return to Utah for his sophomore campaign, a move that should pay off handsomely for him this June. Not only is the 20-year-old now virtually assured of being a top-10 pick, but his game is now better suited to succeed at the NBA level thanks to the extra year in school. Poeltl made some significant strides during his sophomore campaign. His confidence level and efficiency were noticeably improved. He’s still far more valuable as a defender than as an offensive weapon at his current stage of development, but Poeltl has shown flashes of the potential to evolve into the two-way threat that NBA scouts crave when analyzing big men.

STRENGTHS: The first thing that stands out about the 7’1″ Poeltl’s game is how fluid and deceptively athletic he is. While he’s not an athletic freak in the vein of a Karl-Anthony Towns or Kristaps Porzingis, two distinguished members of the draft class of 2015, Poeltl is certainly mobile and quick enough to effectively guard players on the perimeter, which is an uncommon skill for big men. Poeltl is quite effective when running in transition, and his soft hands allow him to make some difficult catches in traffic. It’s extremely tough to prevent him from scoring when he gets close to the rim, though he’ll need to develop a stronger and more diverse post game if he hopes to be a consistent offensive threat in the NBA. Poeltl has shown the potential to be an elite defender at the NBA level, though I don’t necessarily believe he’ll be a dominating rim protector in the league during his career. His true defensive value will come from his ability to play effective team defense, his high motor and basketball IQ, as well as his ability to be extremely effective against the pick-and-roll.

WEAKNESSES: Poeltl has demonstrated the ability to score close to the basket, but he still has a ways to go in his offensive development. The big man hasn’t shown the ability to create his own offense, and he’ll need to continue to work at improving his midrange jump shot, which has the potential to become an effective weapon for him down the line. Poeltl’s offensive output during his rookie campaign is likely to consist primarily of putbacks and transition buckets and he shouldn’t be counted on to produce much initially. He’s not rail-thin at 240 pounds, but he’ll need to add strength and bulk if he hopes to survive prolonged exposure to the NBA’s elite big men on a nightly basis. Poeltl also needs to improve his decision-making when facing multiple defenders, as his 2.1 turnovers per game are a touch high for a player not generally tasked with handling the ball or facilitating an offense.

One thought on “Prospect Profile: Jakob Poeltl (Part One)”