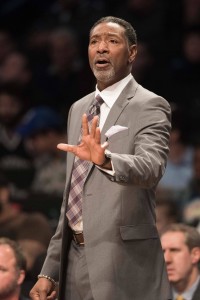 The Timberwolves have officially relieved interim coach Sam Mitchell of his duties, effective immediately, the team announced. Minnesota will begin its search for a new head coach and head of basketball operations posthaste. The news was first relayed by Jerry Zgoda of The Star Tribune (on Twitter). Milt Newton remains the team’s GM for now.

“The future of the Minnesota Timberwolves has never been brighter,” team owner Glen Taylor said in the official release. “It’s important that we find the best leaders to shape our talented team and help them realize their full potential. We owe it to our fans, our community and to our players to ensure our team has the best possible chance at winning an NBA title.”

“I would like to thank both Sam and Milt for a good job under very difficult circumstances in guiding our team this season,” Taylor continued. “They were put in a historically challenging position as no team in NBA history has had an active head coach pass away. Both men provided our team with continuity and direction for the 2015/16 season. We will always be grateful to Sam for his contributions this season and wish him and his family the best in the future.”

Adrian Wojnarowski of The Vertical relayed earlier today that Mitchell was to be part of the search process for a new coach, but that apparently isn’t the case since the team was so quick to cut ties with Mitchell after tonight’s 144-109 drubbing of New Orleans. Taylor has hired the search firm Korn Ferry to help in the hunt for a new coach as well as a new president of basketball operations, though the team may elect to hire one person for both slots, as Wojnarowski and Jon Krawczynski of The Associated Press reported. The Wolves coaching targets reportedly include Grizzlies coach Dave Joerger, Jeff Van Gundy, Tom Thibodeau and Scott Brooks.

Minnesota went just 29-53 this season under Mitchell, but that was a significant improvement over last season’s 16-66 record, and not much was expected from the youthful roster despite the presence of Andrew Wiggins and Karl-Anthony Towns, the last two No. 1 overall picks. The team has shown promise and Towns has swept the league’s Rookie of the Month honors thus far. Mitchell was to have continued serving as an assistant coach this season but took the head coaching reigns in September while Saunders suffered complications from cancer treatment. Saunders died in October, a few days before opening night.