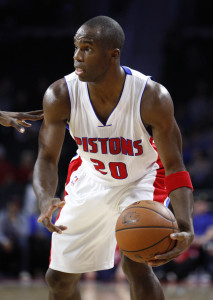 4:18pm: The Pistons have announced via press release that the trade is official.

2:25pm: The second-rounder headed to Detroit in the proposed deal will be a 2019 pick, according to Charania.

1:00pm: Within his full report on the proposed deal, Charania writes that the Magic would simply absorb Meeks into their cap room without sending out another player in return. The Pistons would receive a conditional second-round pick, and would also gain a trade exception worth Meeks’ salary — the exact amount of that exception would depend on whether the deal is finalized in June or July.

Of course, if Detroit’s total team salary – including cap holds and exceptions – slips below the salary-cap threshold in the new league year, the club would lose that trade exception.

12:50pm: The Pistons are nearing an agreement on a trade that would send veteran guard Jodie Meeks to the Magic, according to Shams Charania of The Vertical (Twitter link). It’s not clear yet what Detroit will receive in return for Meeks.

We heard around the time of the draft that the Pistons were shopping Meeks in the hopes of finding him a new home. Given how available he was, the return for Meeks likely won’t be significant, but we’ll have to wait to see whether Orlando is sending back salary in return, or whether the Pistons will simply shed some salary while picking up a draft pick or the rights to an overseas player.

Signing Meeks was one of Stan Van Gundy’s first moves as the Pistons’ president of basketball operations during the 2014 offseason, but the move hasn’t worked out, due in large part to Meeks’ health issues. The Kentucky product has missed 101 regular season games due to various injuries since arriving in Detroit.

In 63 total games over the last two years, including just three in 2015/16, Meeks averaged 10.9 points and 0.9 steals per game while shooting 35.3% from three-point range. The 28-year-old has one season and $6.54MM left on his contract — if he’s healthy in 2016/17, that’s a decent price for a veteran shooter, considering the sort of big-money deals we expect to see handed out in free agency this summer.