Hoops Rumors is looking ahead to offseason moves for all 30 teams. We’ll examine free agency, the draft, trades and other key storylines for each franchise as the summer approaches.

State Of the Franchise 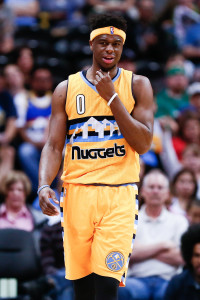 For the third straight year the Nuggets ended the season with a sub-.500 record and a trip to the NBA draft lottery. But despite the lack of success in the standings, Denver is a team on the rise, stocked with a deep roster, ample cap room, three first round picks in this year’s draft and a solid head coach in Michael Malone.

It’s difficult to gauge just how talented Denver can be as a team, given the myriad injuries suffered by the team’s top players the past few years. The Nuggets’ three highest-paid players, Danilo Gallinari, Kenneth Faried and Wilson Chandler, each missed some – or all – of the 2015/16 campaign due to injuries. While Faried has been a relatively healthy player during his career, it has gotten to the point where it would be foolish to bank on either Gallinari or Chandler playing a full season’s worth of games given their respective track records. While there’s no denying that the pair are talented players who can light up the scoreboard when they are on the court, it may time for the franchise to consider moving on from one or both players in order to foster greater roster/rotation stability and continuity.

The Nuggets are also still seeking a star player to build around, not having had a true alpha since dealing away a disgruntled Carmelo Anthony to the Knicks during the 2010/11 campaign. While the team weathered his departure reasonably well the two seasons following the trade, the NBA has always been a star-driven league and despite their solid depth, the Nuggets were never true threats to bring home an NBA title during those years. If the team is to truly move forward as an organization, Denver will need to add a star-caliber player this offseason via free agency, the trade market or the draft.

What To Do With the Manimal?

Faried is a high-energy player whose style of play endeared him to fans and led team management to ink him to a four-year, $50MM extension in 2014. While that pact is likely to look like a bargain after this summer’s free agent deals are handed out, there is a question of fit for Faried. With the NBA moving further away from traditional big men who patrol the paint, Faried’s skill set doesn’t quite fit with the times. He is still a solid rebounder and hustle player in the paint, but his offensive game has not evolved since he arrived in the league back in 2011/12. This past season, Faried played his fewest minutes since his rookie campaign while seeing his scoring, rebounding and defense decline slightly from his previous seasons.

The 26-year-old’s lack of a perimeter game wouldn’t be as big an issue if his teammates were better at connecting on their outside shots, which would then allow Faried to do what he does best — create havoc in the paint area with his energy and rebounding. Full seasons from Gallinari and Chandler would certainly go a long way toward this end, but as I previously mentioned, counting on that duo to remain on the court isn’t a realistic approach.

It may be in the team’s best interests to explore the trade market for the Manimal. Faried can be a valuable contributor on the right team, but the Nuggets may not be the best spot for him any longer. Denver has other frontcourt combinations it can try, including playing Chandler (if healthy) at the four spot, which would give the squad an interesting stretch-four option. I cannot envision Faried being content with a sixth man role in Denver, but he may be amenable to doing so for a contending team. Trading away Faried may be the best option for both the Nuggets and the player in the long run.

Even if Darrell Arthur opts out of his contract, the Nuggets will have just three unrestricted free agents from this year’s roster – Arthur, D.J. Augustin, and Mike Miller – and none of them are crucial, long-term pieces. That leaves Denver with 12 contracts (nine guaranteed) on its books for 2016/17 and no glaring holes to fill, but there’s still plenty of room for the club to get involved in free agency if opportunities arise.

The Nuggets will have enough cap flexibility this offseason to add a max salary player, but with the team not being seen as contenders and Denver not a destination city for free agents, doing so will be a tall order. One realistic target for the team is Ryan Anderson, who is perhaps the best stretch-four on the open market this summer. Anderson is almost assuredly going to be overpaid on his next deal and it may make sense for Denver to be the ones to do so. If the bidding on Anderson becomes too intense, or the player decides he doesn’t want to come to Denver, Hornets unrestricted free agent Marvin Williams would be a good (and cheaper) fallback option.

Denver also needs to add wing players who can stretch the floor with their outside shooting, especially if Emmanuel Mudiay is unable to improve his perimeter game. The team could try to navigate the waters of restricted free agency and make a run at signing Bradley Beal or Evan Fournier, though the likelihood of landing either is remote. Also, Beal has his own set of injury concerns and the Nuggets may not want to risk adding another player likely to spend significant time in street clothes during games. The draft is a more likely avenue for the team to address this need.

There isn’t likely going to be a star-caliber player available at pick No. 7, so Denver should seriously consider trying to move up in the draft. Both Boston (No. 3) and Phoenix (No. 4) are reportedly considering trading down, though it is unclear just how much the Nuggets would need to give up to make the jump into the top five. If Denver stands pat, I believe it will target backcourt help, unless Dragan Bender or Jaylen Brown are still on the board at No. 7 overall, then all bets are off. But that’s a development not likely to come to pass given the pre-draft buzz surrounding both of those players.

If the Nuggets stay where they are at in the first round, their two top targets will almost certainly be Buddy Hield and Jamal Murray. Hield should be ready to contribute from day one and would fit alongside Mudiay rather nicely. He would certainly provide the outside shooting the team desperately needs, though I don’t see him developing into a star player during the course of his career. Murray has a higher upside and can play both backcourt spots, but he will take longer to develop and contribute than Hield will. Denver could also look to add a stretch four if the top guards are off the board and Marquese Chris, Henry Ellenson and Skal Labissere are all viable candidates for that role.

There’s plenty of reasons to be optimistic if you are a Nuggets fan. While the team, barring an unexpected free agent windfall, isn’t expected to make the playoffs in 2016/17, better things are ahead in the Mile High City. Mudiay, Jusuf Nurkic and Gary Harris are a solid young core to build around, Malone appears to be the right man for the job and the franchise has some enticing pieces to use as trade bait. Injuries will always be a concern and the team may be better served to part ways with one or more of the injury prone players on its roster. But this a club that has plenty of viable and realistic options to explore in order to improve itself, which should make for an exciting summer in Denver.