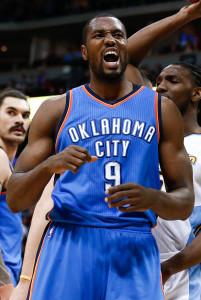 Ibaka had spent his entire seven-year career with OKC after being drafted 24th in 2008. The 26-year-old has one season left on his contract at $12.25MM. He appeared in 78 games for Oklahoma City this season, averaging 12.6 points, 6.8 rebounds and 1.9 blocks. The Thunder reportedly have been gauging the trade market for Ibaka in advance of the draft.

Oladipo, 24, will be eligible for a contract extension next month for the first time in his NBA career. He is scheduled to make about $6.55MM next season in the final year of his rookie deal. The combo guard averaged 16.0 points and 4.8 rebounds for the Magic in 2015/16 while shooting .438 from the field.

Ilyasova, 29, has an $8.4MM contract for next season, but only $400K of that is guaranteed. He split this season between the Pistons and Magic, averaging 10.4 points and 5.4 rebounds in 74 games.

Earlier in the evening, the Raptors offered their No. 9 pick to the Thunder for Ibaka, tweets Marc Stein of ESPN.com, but Oklahoma City turned down the deal. Toronto is searching for a replacement for 35-year-old Luis Scola, who started 76 games this season. Scola will be a free agent after earning $3MM during 2015/16. Toronto wound up keeping the ninth pick and taking center Jakob Poetl out of Utah.