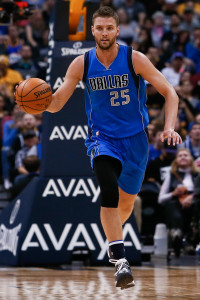 JULY 7th, 6:42pm: The signing is official, the Grizzlies announced via press release.

JULY 1st, 2:27pm: The Grizzlies and Chandler Parsons have reached an agreement on a multiyear deal, Adrian Wojnarowski of The Vertical reports (via Twitter). The pact will cover four years and will pay Parsons the league maximum, the Vertical scribe notes. The Blazers also reportedly offered him a max deal, but instead Parsons is headed to Memphis.

Parsons becomes the first upper-tier free agent to choose Memphis in free agency, Wojnarowski notes (on Twitter). Though, the small forward’s status as a star is certainly up for debate given his statistical track record. The only other free agent signed by the franchise for above the mid-level exception prior to Parsons was Darko Milicic, adds Chris Herrington of The Commercial Appeal (Twitter link). I’d wager that Memphis and its fans are certainly hoping this addition provides more of an impact given the dollar figures involved.

With Parsons in the fold, the team will turn its attention to retaining point guard Mike Conley, who is an unrestricted free agent. The addition of Parsons may be the deciding factor for Conley, with Sam Amick of USA Today noting (via Twitter) that Parsons is confident that the point guard will return to Memphis next season.

The 27-year-old reportedly eliminated the Mavs from consideration after team balked at offering him max dollars, a not unreasonable stance given Parsons’ injury history. He made 61 appearances this past season for Dallas, notching averages of 13.7 points, 4.7 rebounds and 2.8 assists in 29.5 minutes per outing. He shot .492/.414/.684 from the field on the campaign.

In five NBA seasons, Parsons has averaged 14.3 points, 5.1 rebounds and three assists. He was the No. 38 overall pick of the Rockets in the 2011 NBA draft.