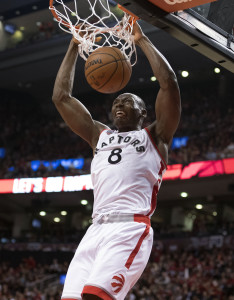 JULY 7, 10:18am: The Magic have formally announced Biyombo’s signing (via Twitter).

JULY 2, 2:45pm: Adrian Wojnarowski of the Vertical tweets that the pact will be worth $72MM over four years.

2:27pm: The contract is estimated at four-years and approximately $70MM, per Marc Stein of ESPN.com (on Twitter).

2:15pm: The Magic and unrestricted free agent Bismack Biyombo have come to terms on a deal, Jon Krawczynski of The Associated Press reports (on Twitter). The agreement is for four years, but the amount of the pact has yet to been reported.

Biyombo’s stock rose dramatically during the Eastern Conference playoffs, when his playing time spiked after Jonas Valanciunas was injured. He averaged 5.5 points, 8.0 rebounds and 1.6 blocks while appearing in every regular-season game, then bumped those averages to 6.2/9.4/1.4 in 20 playoff games. He opted out of his deal and the $2.9MM he was set to earn next season and all but assuredly secured himself a hefty raise as a result.

Toronto reportedly wanted to retain Biyombo, but only held his Non-Bird rights, which meant it would have to use cap room to re-sign him. A number of roster moves designed to free cap space would have been needed to make that a possibility. Moves that the team was either unwilling or unable to make.

The addition of Biyombo, coupled with the trade acquisition of former Thunder forward Serge Ibaka certainly gives Orlando and imposing frontcourt defensively. It remains to be seen if these additions will prompt the team to shop center Nikola Vucevic, whose salary of $12,250,000 is looking more and more like a bargain every day.