3:37pm: The Mavs are sending a future second-round pick to Golden State as part of the deal, tweets Shams Charania of The Vertical.

1:35pm: The Warriors and Mavs are now in agreement on a trade involving Bogut, Stein reports (via Twitter). 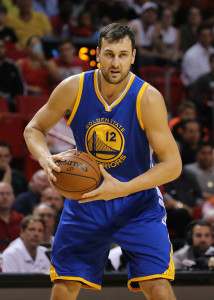 1:29pm: The Warriors and Mavericks are in the “final stages” of negotiations on a trade that will send Andrew Bogut to Dallas, according to ESPN’s Marc Stein (Twitter links). There are still some details to be sorted out, but it looks like a deal will get done, writes Adrian Wojnarowski of The Vertical. Stein had reported earlier today that the Mavs had emerged as a strong potential suitor for Bogut, in the wake of Kevin Durant‘s agreement with Golden State.

Because the Warriors need to clear cap room, the Mavs won’t be sending back any salary in the proposed deal, and will absorb Bogut into their own cap space. The other parts of the deal aren’t known yet.

Dallas will have to send something to Golden State in the deal, but it could just be a heavily-protected future draft pick or the NBA rights to a previously-drafted player. If draft picks are involved in the swap, I’d expect the Mavs to land the better pick, since they’re essentially doing the Warriors a favor, allowing Golden State to clear the room necessary for Durant.

A former No. 1 overall pick, Bogut remains a solid presence in the middle when he’s healthy. His 5.4 PPG for the Warriors this past season represented a career-low, but he contributed 5.3 RPG and 1.6 BPG to go along with a .627 FG%. Golden State obviously didn’t lean on Bogut for offense, but the team seemed to miss his rim protection and rebounding in the NBA Finals after he went down with a knee injury.

In addition to finalizing a deal for Bogut, the Mavericks are attempting to secure an agreement with Harrison Barnes, and will look to re-sign Dirk Nowitzki, per Wojnarowski.

Meanwhile, with a probable landing spot lined up for Bogut’s $12.68MM salary, the Warriors intend to fully guarantee Shaun Livingston‘s $5.78MM salary for the coming season, tweets Marc J. Spears of The Undefeated.