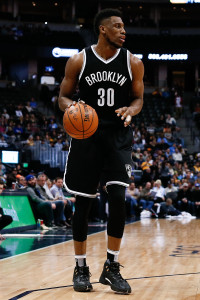 JULY 7: The swap sending Young to the Pacers in exchange for the rights to No. 20 overall pick Caris LeVert and a future second-round pick is now official, according to a Nets press release.

JUNE 23: The Pacers have agreed to acquire Thaddeus Young from the Nets in exchange for the No. 20 overall pick in tonight’s NBA draft and a future protected second-rounder, Adrian Wojnarowski of The Vertical reports (on Twitter). The scribe had reported earlier that several Western Conference teams had been aggressively pursuing Young, who Brooklyn was looking to deal to the highest bidder in an effort to land a first round pick, which it nabbed from Indiana in the swap.

This is the second big  move by Indiana in the past two days, with the team landing point guard Jeff Teague from Atlanta in a three-team trade on Wednesday. It certainly appears that team executive Larry Bird is serious about retooling his squad for new coach Nate McMillan.