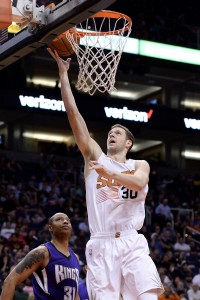 JULY 8: The Pistons have officially signed Leuer, the team announced today in a press release.

JULY 2: The Pistons and unrestricted free agent Jon Leuer have reached an agreement on a contract that will land the forward in Detroit, his agents at Priority Sports tweeted. It will be a four-year deal worth $42MM, Marc Stein of ESPN.com relays (ESPN Now link). The contract is fully guaranteed, adds Michael Scotto of Sheridan Hoops (on Twitter).

Detroit has been on the market for a stretch-four and Leuer, who has shot 37.5% from beyond the arc over the course of his five-year career, can certainly help to that end. He may not be as newsworthy an addition as Al Horford, whom the team was reportedly courting, but landing Leuer on a deal with an average annual salary of $10.5MM in the current free agent market is a nice fallback for the boys from Motown.