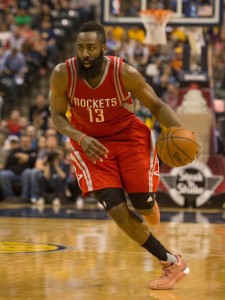 If there was any doubt that the Rockets are James Harden‘s team, there should be no question who the alpha is in Houston moving forward. The shooting guard and the team have agreed to a four-year, $118MM renegotiation and extension that could keep him under contract through 2020, Adrian Wojnarowski of The Vertical reports. The arrangement was announced during a press conference by team owner Leslie Alexander moments ago. “We are building a new core and we are excited about locking James Harden in for a long time,” GM Daryl Morey said (Twitter link).

The arrangement provides Harden with a raise on his 2016/17 and 2017/18 salaries using cap space, plus adds two additional years at the maximum salary, Wojnarowski notes. Harden had two years and approximately $34.6MM left on his existing deal, and the renegotiation gives him nearly $10MM (2016/17) and $11MM (2017/18) raises and two extra years at $30.4MM and $32.7MM, respectively, the scribe relays. In total, the Rockets are going to fork over an additional $83.5MM over the next four years to Harden. The pact also includes a player option for the 2019/20 season, Wojnarowski tweets.