JULY 20: Two weeks after striking an agreement, the Rockets have issued a press release formally announcing their deal with Nene.

JULY 6: The Rockets have agreed to terms with free agent big man Nene, reports Adrian Wojnarowski of The Vertical. According to Mark Berman of FOX 26 Houston (Twitter link), it will be a one-year deal for Nene. Wojnarowski adds that it will be worth $2.9MM, meaning Houston is probably using the room exception. 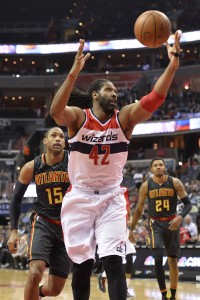 Houston has had an active July so far, striking four-year deals with Ryan Anderson and Eric Gordon. With those two agreements, the team added outside shooting and scoring ability, but had yet to land a big man that could help protect the room. Nene should help make up for some of the rebounding and inside defense the Rockets lost when Dwight Howard opted out of his contract and agreed to join the Hawks.

Nene, who will turn 34 in September, has spent his 14-year NBA career so far with the Nuggets and Wizards, having played the last four-plus seasons in Washington. The veteran big man has seen his minutes decline over each of the last couple seasons, from 29.4 in 2013/14 to just 19.2 last year, but he continued to be a solid rotational piece for the Wizards, averaging 9.2 PPG, 4.5 RPG, 0.9 SPG, and a .544 FG%.

Although the Rockets should still have some cap room left, depending on what happens with free agents Donatas Motiejunas and Terrence Jones – and their cap holds – Nene’s reported $2.9MM salary signals that he’ll likely be signed using the $2.898MM room exception that under-the-cap teams receive. That will allow Houston to max out its room under the cap before finalizing Nene’s deal.