TUESDAY, 11:42am: According to ESPN’s Marc Stein (via Twitter), the Spurs have officially waived Duncan for salary-cap purposes. The veteran big man had been on the team’s books for $6,393,750 this year, so assuming San Antonio stretched his salary, that figure will now be $2,131,250 annually over the next three seasons. 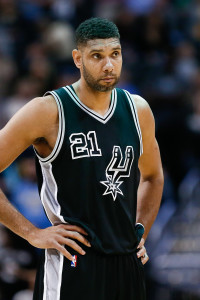 MONDAY, 9:16am: For many basketball fans around the world, it is extremely difficult to imagine the NBA without Tim Duncan a part of it. But that’s the reality we face with the surefire Hall-of-Famer officially announcing his retirement today via the team’s website. This marks the conclusion of one of the most impressive professional careers the league has seen.

Since drafting Duncan with the No. 1 overall pick in the 1997 NBA Draft, San Antonio won five championships and posted a 1,072-438 regular season record, good for a .710 winning percentage, which is the best 19-year stretch in NBA history and was the best in all of the NBA, NFL, NHL and MLB over that span.