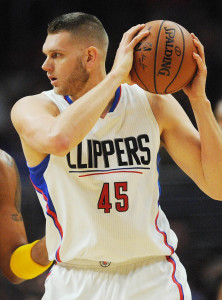 JULY 13: The Wolves have formally signed Aldrich, the team announced today (via Twitter).

JULY 3: Veteran center Cole Aldrich will sign a three-year, $22MM deal with the Timberwolves, tweets Marc Stein of ESPN.com. The 27-year-old center spent the 2015/16 season with the Clippers and averaged 5.5 points and 4.8 rebounds in 60 games.

Aldrich decided last month to opt out of his contract with L.A., which would have paid him the league minimum, approximately $1.23MM. The Clippers had hoped to keep the unrestricted free agent, but he chose to accept the offer from Minnesota.

The Bloomington, Minn., native will serve as a backup to Rookie of the Year Karl-Anthony Towns. The Timberwolves will be his sixth NBA franchise.