12:48pm: The Thunder and Nuggets have each issued press releases confirming the deal.

12:25pm: The two draft picks heading to the Nuggets are 2017 second-rounders, according to Royce Young of ESPN.com (via Twitter). That means Denver will be receiving the Grizzlies’ pick and the Thunder’s pick.

12:01pm: The Nuggets and Thunder have agreed to terms on a trade, according to reports from Chris Dempsey of The Denver Post and Adrian Wojnarwoski of The Vertical. Per Dempsey and Wojnarowski, Denver has agreed to send Joffrey Lauvergne to Oklahoma City in exchange for two future second-round picks. 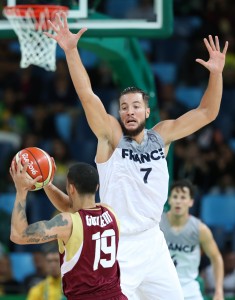 Lauvergne, who will turn 25 in a month, was a role player for the Nuggets last year, appearing in 59 contests and starting 15 of them. For the season, he averaged 17.6 MPG, chipping in 7.9 PPG, 4.9 RPG, and 0.9 APG for Denver, while shooting 51.3% from the floor and 89.9% from the free-throw line. Lauvergne also played for France in the Olympics this summer.

The Thunder figure to work Lauvergne into their frontcourt rotation off the bench, with Serge Ibaka and Nazr Mohammed no longer on the roster. Steven Adams, Enes Kanter, Domantas Sabonis, Nick Collison, Andre Roberson, and Ersan Ilyasova are among the other players who will look to earn minutes at the four or five this season in OKC, while Mitch McGary may not end up on the regular-season roster, as ESPN’s Royce Young tweets. The Thunder already had 15 guaranteed salaries on their cap for 2016/17 prior to Lauvergne’s arrival.

Meanwhile, with Lauvergne no longer in the mix in Denver, the Nuggets now have 14 guaranteed salaries on their books for ’16/17, plus JaKarr Sampson, D.J. Kennedy, and Axel Toupane on non-guaranteed contracts.

The Thunder have just enough room to fit Lauvergne’s salary in under their cap without waiving or trading any other players. Per Basketball Insiders’ data, Oklahoma City’s team salary for 2016/17 was at $92,403,967 before the trade. Lauvergne is on the books for $1,709,719 this season, while the league-wide salary cap is $94,143,000 — the Thunder should be able to complete the deal with about $30K in cap space to spare.

Lauvergne’s salary for this season is only half guaranteed so far, with $854,859 still non-guaranteed. However, the fact that the Thunder were willing to give up two draft picks for him suggests that the team doesn’t intend to waive him before guaranteeing the rest of that salary.