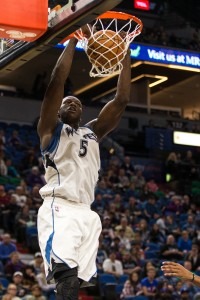 The Timberwolves and Gorgui Dieng are in the process of finalizing a contract extension, Shams Charania of The Vertical reports (via Twitter). The deal will be for four years and is valued at $64MM, per the scribe. No word yet on whether or not the arrangement includes any options, player or team. His new deal with an average annual value of $16MM is certainly a hefty bump from the $2,348,783 he is earning this season.

The Wolves have another extension candidate on their roster in Shabazz Muhammad, but the latest report on the fourth-year guard suggests that he and the team are “far apart” in negotiations.