3:28pm: Both teams have issued press release confirming the deal. The Thunder’s announcement indicates that the team has gained a trade exception, as noted below, so for now OKC won’t renounce that TPE to gain cap room.

2:57pm: The first-round pick heading to Philadelphia in the swap will be top-20 protected, and will turn into two second-rounders if it doesn’t fall in that 21-30 range, tweets Bobby Marks of The Vertical. The Thunder already have a first-rounder going to Utah in 2018, so the pick involved in the deal with the Sixers will be a 2020 selection, as Michael Scotto of Basketball Insiders tweets. If the Sixers don’t get a first-rounder, they’d get their pair of second-rounders in 2022 and 2023, per Keith Pompey of The Philadelphia Inquirer (via Twitter).

2:43pm: The future pick the Sixers are receiving from the Thunder will be a first-rounder, reports Jeff Zillgitt of USA Today (via Twitter). However, Zillgitt adds that the pick will have multiple protections, and Adrian Wojnarowski of The Vertical tweets that it may be a “fake first” of sorts. The Sixers hope to receive the first-rounder from the Thunder in 2020, tweets Keith Pompey of The Philadelphia Inquirer.

Meanwhile, Jessica Camerato of CSNPhilly.com (Twitter link) says Philadelphia plans to keep Ilyasova rather than waiving him to open up a roster spot.

2:23pm: The Sixers and Thunder have completed a trade, according to Adrian Wojnarowski of The Vertical (Twitter links), who reports that Ersan Ilyasova is heading to Philadelphia along with a conditional future draft pick. Oklahoma City will receive Jerami Grant in return. 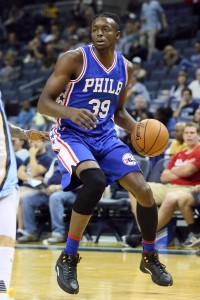 According to Wojnarowski (via Twitter), the Thunder have been pursuing a potential trade involving Grant for “several months.” The 22-year-old, a second-round pick back in 2014, spent the last two seasons with Philadelphia. In 144 total contests for the franchise, he averaged 8.2 PPG and 3.9 RPG, shooting just 39.4% from the floor. While Grant has shown some promise, the Sixers had a crowded frontcourt, making him somewhat expendable.

Philadelphia, meanwhile, will land Ilyasova, a stretch four who could add some much-needed outside shooting to the Sixers’ roster. The Turkish big man was one of three players Oklahoma City received from the Magic in exchange for Serge Ibaka this summer, along with Victor Oladipo and Domantas Sabonis. Ilyasova was the least-important piece in that deal, but has been a solid scorer and rebounder over the course of his NBA career, putting up 10.6 PPG, 6.0 RPG, and a .369 3PT% in 530 career contests with the Bucks, Pistons, Magic, and Thunder.

The Sixers’ huge chunk of cap room will come in handy when completing this move. The club is well below the salary floor, entering the day with only about $70MM in 2016/17 salary on its books. Ilyasova ($8.4MM) makes significantly more money than Grant ($980K), so Philadelphia will take on some salary in the deal, which likely explains why the Thunder are surrendering a draft pick in the swap.

Additionally, Grant – unlike Ilyasova – is under team control beyond this season. The young forward is earning the minimum salary this season and has a team option on his contract for the 2017/18 worth the minimum as well.

The Thunder entered the day ever so slightly over the cap, so they’ll have some flexibility after completing the deal — the team could technically remain an over-the-cap club, with a traded player exception worth Ilyasova’s salary. However, if OKC wants to forfeit that TPE, the team would have more than $7MM in cap room at its disposal.